It's an unfortunate truth that our Agents are often misunderstood by the very people they help the most. 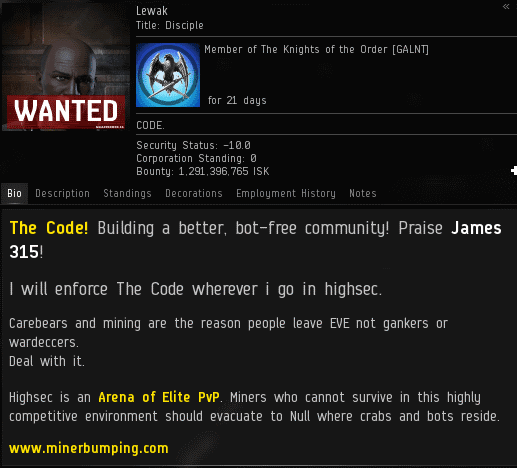 Agent Lewak has dedicated himself to the cause of saving highsec. This mostly involves killing people and telling them about the Code. Do they appreciate it? Not always.

We've seen how the miners frequently misinterpret the Code, leading to such phenomena as the "Phantom Provision". Our Agents' actions, too, get misinterpreted by the miners.

Rebellious miners are not particularly interested in understanding why they lose ships; they're unable to tolerate the self-criticism that would inevitably follow. When told what they did wrong, they lash out in anger.

Lewak isn't afraid of offending the miners--he's afraid of standing by and watching highsec destroy itself. That's what was going on in the days before the Code. Never again. Not while there are Agents like Lewak.

Is it possible that some miners genuinely believe Lewak is their enemy, and that he means to do them harm? Yes, it's possible. Carebears are known for making mistakes.

...But the ignorance of a miner does not in any way excuse his misconceptions or his misdeeds.

Consider the miners who flaunt their violations of the New Order Bathroom Protocol. "I wasn't AFK, I was going to the bathroom." So the miner is either lying (he was AFK) or telling the truth (he brought his laptop into the bathroom with him). Regardless, he is a Code violator--and it is his natural tendency to live in filth.

A Code enforcer is honourable and elite. He is also kind and generous: He expects a miner to uphold a basic standard of human decency. This is a compliment--unearned, but freely given.

It's one thing to help someone who will appreciate it. But to perform a good deed when you know that your beneficiary will despise you for it? That's true altruism. Our Agents are the most elite altruists in all of EVE.

On occasion, a miner will reply to a gank with an acknowledgement that our Agents' work is necessary. It is indeed. However, there's always the risk that the miner doesn't really mean it--that he's attempting to conceal his bot-aspirant intentions behind a false smile.

The Code always brings out the truth:

And the truth of the Code will set highsec free. Always!
Posted by MinerBumping at 18:04