One of the great tragedies of EVE over the last few years has been the exodus of PvE'ers out of nullsec and into highsec. Nullsec real estate, once the prize of hard-won victories or costly and demeaning renter arrangements, has been scorned in favor of the AFK, risk-free delights of highsec. Agent Amyclas Lacedaemon found a member of a nullsec alliance mining in a Covetor in highsec. The Covetor was destroyed, and the miner was chastened for not mining where he belonged. Amyclas received the following reply: 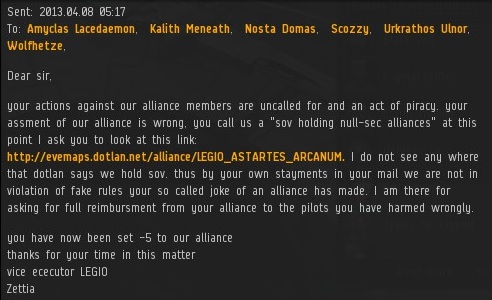 "vice ececutor" Zettia took issue and demanded reimbursement. But Amyclas' position never changed: Nullsec alliances should mine in nullsec. Highsec belongs to the followers of the Code. 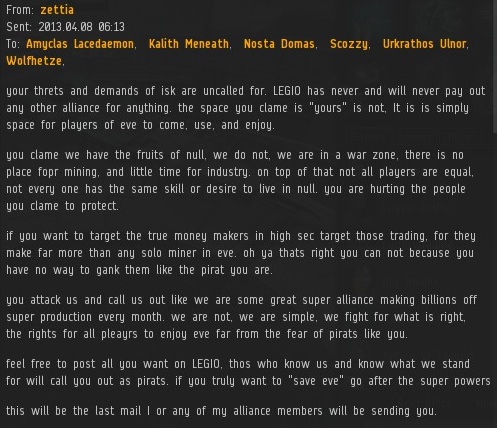 Zettia employed the classic carebear tactic of trying to redirect attention toward highsec traders. Yeah, if traders didn't take any risks, we'd deal with them only after the Code-violating miners are annihilated. Zettia concluded his EVEmail by saying it would be the last one that he or any of his alliance members would send. You know what that means. 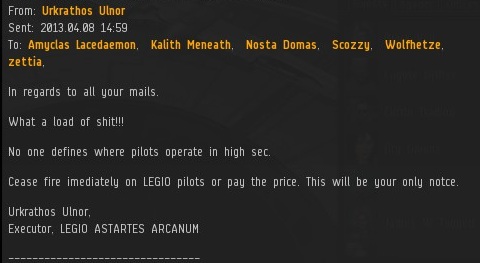 A few hours later, the Executor himself(!) of the alliance sent an EVEmail. But LEGIO ASTARTES ARCANUM is not the only alliance that has engaged in high-level diplomacy with the New Order. I myself was contacted by an alliance representative: 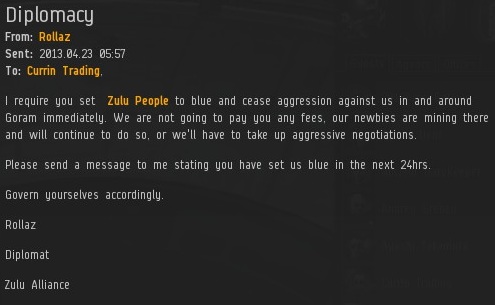 Rollaz, the official diplomat of Zulu People alliance, sent me an EVEmail requesting that I cease aggression. I found the EVEmail interesting, because I had never had any contact with Zulu People before. Someone in my corp must have shot someone. It was then that I realized how easy it is to perform diplomatic oversight for a corp in which everyone is allowed to shoot people without permission. No doubt I am the envy of nullsec diplomats everywhere. At any rate, Rollaz warned me that if I didn't set them blue, they would take up "aggressive negotiations". That sounded more like a favor than a threat, because I was curious what aggressive negotiations would look like. I sent Rollaz a nice note letting him know that I would offer his alliance special treatment, as a show of appreciation for their diplomatic efforts. The terms, of course, were identical to the terms I give everyone else. That's because in my view, I provide everyone in highsec with special treatment. The Code is so much more than the carebears deserve.

The rest was just paperwork. They realized Currin Trading was an alt of James 315, and wanted confirmation that I received the money. 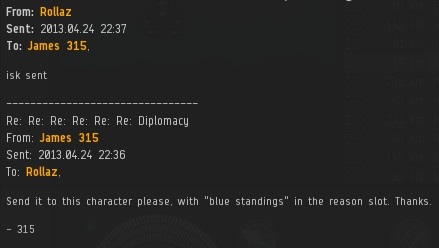 Another victory for the New Order! Of course, blue standings or not, all miners in highsec are required to follow the Code. It's kind of like having a birth certificate. You may be a citizen, but if you murder people, you're going to jail. Likewise, Zulu People forfeited their blue standings simultaneously with the purchase of them; it came to light, based on the earlier EVEmail, that they had no intention of following the Code.

In investigating Zulu People, I was heartbroken by their backwardness and primitive culture--no doubt a direct result of their lack of exposure to civilizing influence of the Code. They are the rarest of creatures, an alliance with a red killboard on eve-kill.net. The month of April has been unkind to them; their killboard efficiency is currently 3%. Crime doesn't pay.
Posted by MinerBumping at 17:44