The Mine Teck Negotiations, Part 5

Previously, on MinerBumping... Doomsday appeared certain as Mine Teck put a hard deadline on a proposed shareholder vote on his fate. The deadline was not met, and Mine Teck blocked me. It seemed all hope was lost.

Soon after I was set to "block" status, I received EVEmails from Mine Teck. We had unfinished business.

But he was only willing to open very narrow windows of opportunity. Sadly, I was not online at the time.

After a few days passed, Mine Teck was dying of suspense. The "stonewall" negotiating strategy that he had perfected began to show signs of crumbling. 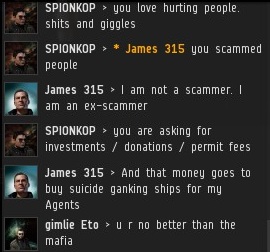 I graced EVE with my presence, but only at my leisure. I spent some time chatting with friends, when suddenly... 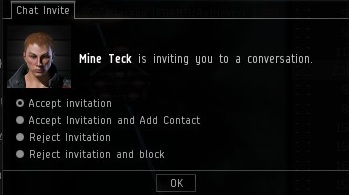 It was an urgent communication from Mine Teck. The tables had turned; playing hard to get really works!

It was the first chance to speak with me that Mine Teck had gotten in several days. At last, he would learn the results of the vote!

At a later date, that is. 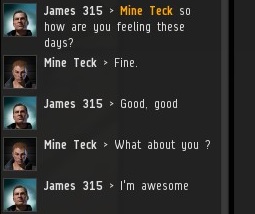 I insisted on some small talk before we got down to business. Mine Teck tried not to show it, but he was trembling with anticipation.

As I informed Mine Teck, the gears of the New Order machinery were inexorably turning.

Despite the lightning-quick speed of the appellate process, the shareholder vote was not yet ready. It had been postponed due to unexpected delays, and sloth. 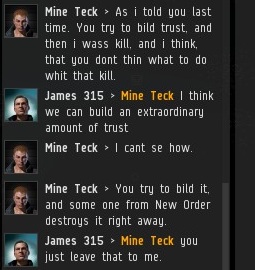 When people start playing a video game, it's not as if they're naturally predisposed to call some random dude "the Saviour of Highsec". So when people call me that, you know I've really earned it. Once I set my mind to something, I don't quit until I accomplish it. The shareholder vote was guaranteed to happen. 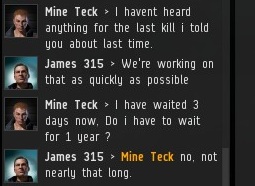 It was only a matter of time--substantially less than 365 days of time.

James 315 and Mine Teck, two giants of highsec, in the same convo. I decided to make the most of it, so I asked him about the effect of the infamous TeamSpeak recording on his EVE career. What he revealed was shocking. Or was it?

To be continued...
Posted by MinerBumping at 02:27