We Are Among You

As I have written in the past, it's becoming increasingly popular to make use of the wonderful game mechanic that enables people to join corporations and shoot corpmates without Concord interference. If you learn that a corp is particularly easy to infiltrate, you can pass the info on to your fellow awoxers!

Agent Gavin9012 sent me a report about an awoxing operation. He had been given a lead by Agent Kaire Koschuken, who also practices this art in the name of the Order. I will note at this point that I couldn't open the linked recruitment advertisement; presumably it has been deleted by the corp in question.

For those unfamiliar, allow me to briefly explain Psychotic Monk's "courier contract collateral scam". If a member of the awoxed corp owns a freighter, you can offer to hire him for a courier contract. The courier contract will involve the transportation of worthless items, but you'll require a large amount of collateral. If for some reason the courier mission fails, the freighter pilot will automatically forfeit the collateral to you. As an awoxer, it's your job to make the mission fail.

Gavin9012 volunteered to use his Thorax to escort the corp freighter pilot, liara halsey, who also happens to be the corp CEO. The courier contract called for liara to haul 100 light missiles, but it failed when Gavin9012 killed her. A gorgeous killmail was produced. Freighters do not have module slots, but they cost over a billion and a half isk--plus whatever collateral Gavin9012 required for the mission.

Can you imagine a world in which every highsec corp must consider that its eager new recruit is actually an Agent of the New Order? It's a wonderful thought; everyone would hold each other to such a high level of accountability to the Code! 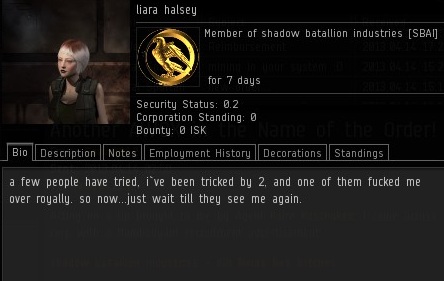 liara halsey's bio was changed into this simple, somewhat bizarre message. She seems broken. I hope she realizes one day that the Code can fix her.
Posted by MinerBumping at 19:01