The Mine Teck Negotiations, Part 6

Previously, on MinerBumping... As negotiations slogged along, Mine Teck became increasingly frustrated with the slow pace of the shareholder vote on his fate; the vote had yet to commence. In the meantime, I hoped to build a bridge between the cultures of Mine Teck and the New Order family.

Mine Teck was unaware that screencaps of our negotiations were being continually posted on MinerBumping. He resolved to stay away until the negotiations and shareholder vote were completed.

Negotiations ground to a halt when Mine Teck dropped a bombshell. He had a previously unaddressed grievance that he wanted to bring up--a classic negotiation-killer. The atmosphere was becoming more toxic all the time. 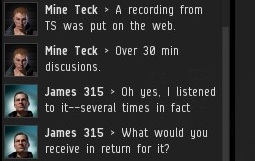 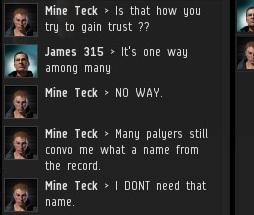 He began to explain how his unexpected, meteoric rise to stardom had affected his life. So many carebears make a name for themselves on MinerBumping, but it's relatively rare that we get insight into the aftermath.

Some idea of the community's reaction to Mine Teck may be inferred by taking a look at his profile. Mine Teck carries one of the largest character bounties in all of EVE--particularly among highsec miners.

Mine Teck was slow to open up about his experiences, but clearly he wanted to talk. 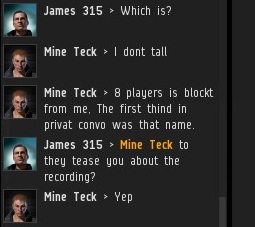 At last, he revealed that perfect strangers from across the galaxy have mocked him for the things he said in the TeamSpeak recording. EVE can be a cruel place.

It was precisely as I always feared: People frequently contact Mine Teck to say "strawberry" to him.

And then, the breakthrough. By speaking about his emotions, I was able to connect to the bot-aspirant on a human level. 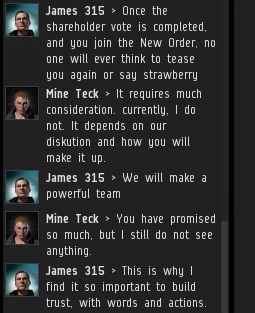 I assured Mine Teck that progress was being made, but he wanted results, not promises.

A few days later, Mine Teck sent me yet another EVEmail. We had a surprisingly large volume of correspondence between us, considering his previous threat to block me forever and join the resistance. 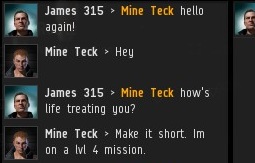 Almost immediately after sending the EVEmail, Mine Teck convoed me. I was curious what he wanted, but he told me that he was busy--despite the fact that he had initiated the conversation. Another brilliant power play by Mine Teck, who was becoming quite the negotiator. 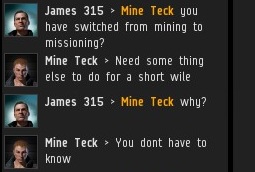 Why was one of EVE's most notorious highsec miners running a mission? He remained secretive on this point. Is it possible that when I reawakened his human emotions, he suddenly realized he found it boring to mine?

Out of nowhere, Mine Teck terminated the convo. We had only spoken for a few minutes. Perhaps there was no more that could be said between us.

But just as suddenly, I received yet another EVEmail from Mine Teck. If I didn't pay him a billion isk, he would join the resistance. Hardball indeed. And I couldn't shake the feeling that next time... would be the most shocking Mine Teck convo yet.