Another productive day of bumping miners and educating people in local, when suddenly...

Whaaa? A bolt of antimatter whizzed by my Invincible Stabber. Startled, I paid greater attention to what was going on around me. 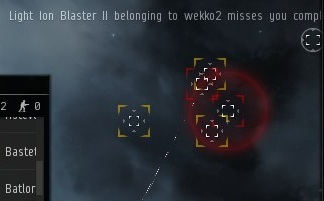 Then another antimatter round streaked past. One shooter might be an accident, but two? Violent treachery!

Two Catalysts were firing at me, and an additional Catalyst and a Brutix were targeting me. I was in a 0.5 system, and they had plenty of firepower. Would my Invincible Stabber be cut down in its prime? 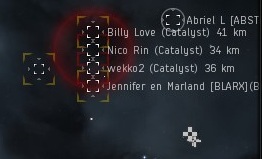 The Catalyst and Brutix who were targeting me opted not to open fire. I was already more than 30km away, far outside proper ganking range (optimally around 2km for the Cats). 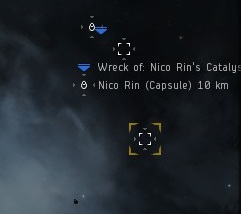 Eventually, Concord came by and took out the trash. The remaining gankers sat around for awhile, uncertain of what to do next. 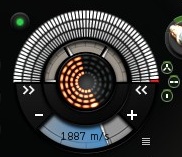 It was a close-run thing: The organized act of terrorism succeeded in getting my shields down to 99%. 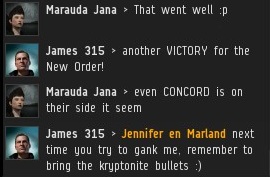 In the aftermath of the attack, an investigation (which consisted of me looking at the overview) concluded that the ringleader was Jennifer en Marland, the Brutix pilot.

Jennifer's corp only has a few members, but they're all charmers like this guy.

Billy Love, the Catalyst who had neglected to open fire, followed me around for awhile. No doubt he regretted his decision not to join the others in shooting at me. This frequently occurs when a group tries to assassinate me: Some have the courage of their (misguided) convictions, while others get cold feet, jeopardizing the DPS of the whole gang and consigning their brothers-in-arms to doom. I don't blame them for their cowardice, however. My Invincible Stabber is even more impressive in person than in the stories people tell about it.

In the wake of their defeat, the gang tried to cheer themselves up. A tall order, considering they had done no more damage than a smartbombing gank Merlin. Jennifer maintained her silence, perhaps ashamed that she had not gone down with the ship, like a good gank captain would.

At the end of the day, the Invincible Stabber is Invincible. The question for all the rebels is, will they waste their days trying to kill an unkillable ship, or will they embrace its truth?
Posted by MinerBumping at 18:08