As the New Order marches unopposed across highsec, various rebels have attempted to theorycraft new strategies for dealing with us. These plans usually involve encouraging someone else to do something. 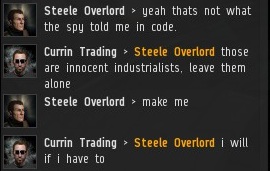 Steele Overlord encouraged others to wardec what appears to be a random industrial corp. I warned him that I would protect the industrialists if I had to--though I didn't have to.

As months go by without effective opposition, the carebear forces of the status quo grow more desperate. Even their petitions have gone unanswered. Amanda diCaprio proposed the nuclear option: If all the miners in highsec quit the game for six months, it will force CCP to act by depriving them of subscription revenue.

The mad plot to organize a mass boycott of EVE horrified even Amanda's fellow rebels.

Amanda was confident that EVE and CCP would survive in the end. When it was all over, the rules would be changed to outlaw the New Order forever. Agent Pestario Vargas countered that if all the miners left the game, those left behind would pick up the slack--and make some decent isk doing so. 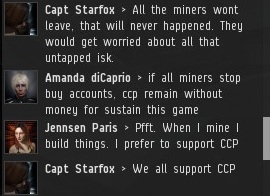 But Amanda's "everyone quits" plan appeared unlikely to be executed in any case. 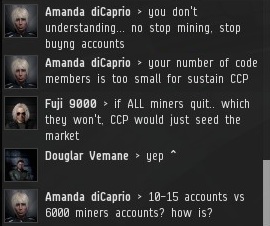 There was some confusion. Amanda was not interested in stopping the mining, just the purchase of subscriptions. 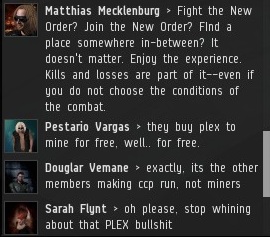 This triggered the standard debate about whether people who pay for their subs with PLEX are really giving CCP a financial benefit or not. 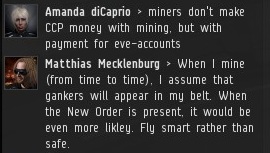 Rebel Matthias Mecklenburg urged Amanda to accept the New Order's existence in EVE, and to abandon her reckless scheme. 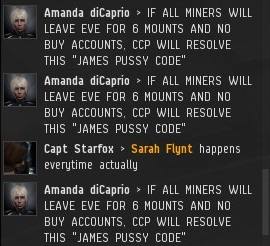 Amanda was unconvinced, and began to do what carebears usually do when their arguments have been defeated in debate.

Though many miners have threatened to quit, few do so. And those who quit are more than covered by the new subscription revenue from people who join EVE for the purpose of joining the New Order. We're CCP's best friends: We have saved or created hundreds--perhaps thousands--of subscriptions, and are a shining beacon of emergent gameplay. I urge all miners to pay their subs and submit peacefully to the rule of the Code.
Posted by MinerBumping at 17:36