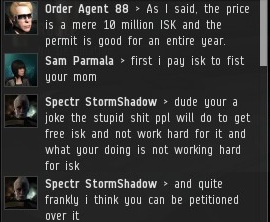 In the Otela system, a popular spot for Red vs. Blue fights, Agent Order Agent 88 was hard at work, bumping non-compliant miners. Spectr StormShadow began to blossom as a potential space lawyer. 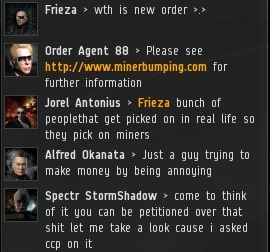 The New Order seemed invincible--but Spectr was prepared to get CCP involved. 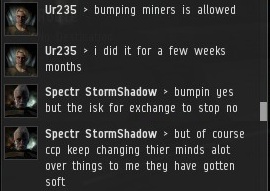 Ironically, Spectr felt that if CCP allowed bumping, it was proof that they were getting "soft". As opposed to making things nicer for the carebears, which would presumably be evidence of CCP hardening up. 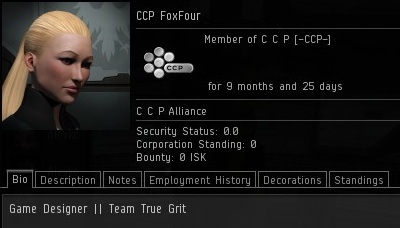 Just as Spectr vowed to get CCP involved, a CCP representative appeared in system! I had written a blog post encouraging CCP to make good on their promises to do something about voter turnout for the CSM8 election. I wasn't alone in noticing the lack of GOTV efforts by CCP; shortly afterward, Poetic Stanziel and Xander Phoena wrote blog posts about the issue from a similar perspective.

In the wake of these blog posts, members of CCP began appearing in various systems encouraging the masses to vote. They also released this YouTube video encouraging players to vote. Though very short and somewhat reminiscent of a hostage video, it's something. It could be a coincidence, but since I'm a blogger, I'll take credit for it all.

CCP FoxFour received a warm welcome from the locals. 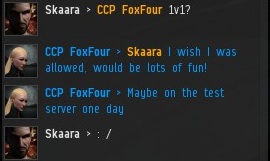 FoxFour's appearance in Otela was off to a rocky start, but this was a prime opportunity for a space lawyer to ask about bumping. 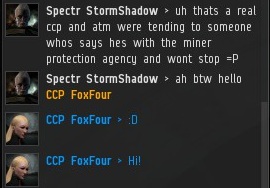 ...However, Spectr was not willing to address the issue directly.

Tinfoil time: Was CCP hoping to boost highsec voter turnout, fearing that a CSM filled with null bloc candidates would be embarrassing? Or more innocently, is highsec just the only place with a large enough concentration of players to conveniently speak to them?

Spectr let the moment pass without getting FoxFour's input on the bumping issue, so Jorel Antonius stepped up to the plate and activated the bumper's kill rights for 250 million isk. Unfortunately, Order Agent 88 simply left, only to return later. A new scam in the works?

So would this count as a CSM-related promotion or not? Hmmm...
Posted by MinerBumping at 18:35