As I travel across my territory (security status 0.5 and above), I often run into people who think problematic thoughts.

Dooobles was one example among many. His mind had been poisoned by propaganda about how nullsec is a "blue doughnut" with little PvP activity. At the same time, it was too dangerous for him to mine there, as a non-doughnut member. 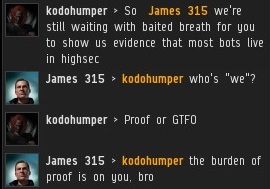 kodohumper spewed another common idea among highsec miners: The carebears of highsec should be left alone, because most botting takes place in nullsec. 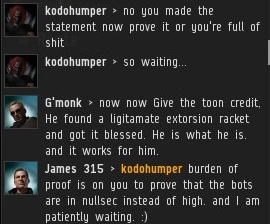 Everyone who has argued with someone on the internet knows that arguments are won by demanding that the other side meet the "burden of proof". This is because sane people do not spend hours collating exhaustive data to win arguments with people who assigned them homework via the internet. 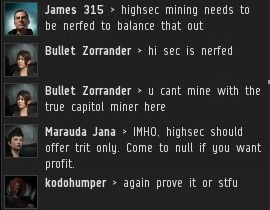 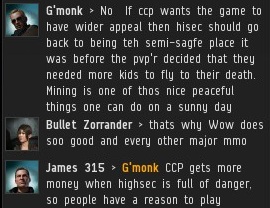 G'Monk stepped in, offering his own poisonous idea: Highsec mining is too dangerous. G'Monk enjoys AFK mining because he can go outside when the weather is good. I don't have a problem with someone leaving the house, but I don't believe they should get paid isk for it. 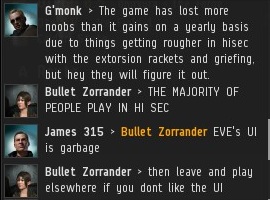 I was grieved when G'Monk suggested that highsec has become more dangerous over the years. So many lost miners. 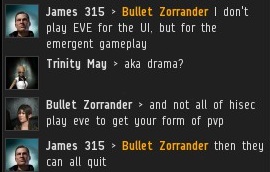 I have always believed that EVE's strength is emergent gameplay, and would not long survive competing in a theme park market with games like WoW.

I stunned the locals when I expressed my belief that the integrity of EVE's emergent gameplay is more important than CCP's finances. I would rather see CCP close its doors than for EVE to lose its spirit. 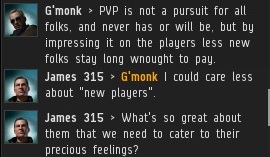 G'Monk argued that EVE needs to be warped into a newbie-friendly version of itself. But why should the true spirit of EVE be sacrificed on the altar to new players--the very people who have contributed the least to the game? 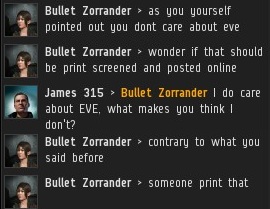 The locals were scandalized and appalled, and threatened to report me to the media for my heresies.

G'Monk and Bullet both shared the misconception that caring about EVE is synonymous with making highsec a peaceful theme park for new players.

...The conversation devolved from there. 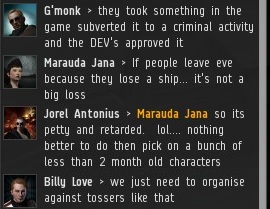 Marauda Jana proved that there are still glimmers of sense in highsec, but the prospects of cutting through the darkness grew dim. 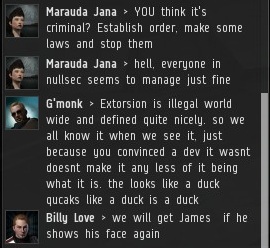 Saving highsec isn't easy. There will be times when it will take extraordinary courage and resolve. I am the real James 315, and I am reporting for duty.
Posted by MinerBumping at 20:41