Redemption of a Space Lawyer

For a long time, CCP maintained a studied silence on the subject of miner bumping. Optimistic of yet another nerf to highsec aggression, miner petitions proliferated. But the day finally came when CCP acknowledged the legality of miner bumping--the first setback experienced by the theme park movement. That was months ago, but the space lawfirms have yet to close their doors.

Faye Ajzenberg had nothing to say to me while I attempted to communicate with her. Nor did she speak a word while I bumped her out of range. Upon returning to keyboard, though, she sent an indignant EVEmail.

I called her on it in local. Any conversation worth having via EVEmail is worth having in the presence of a hundred random strangers in a highsec system. Faye repeated her threat to petition me. Even if the vast majority of such threats are never carried out, I remain by far the most "petitioned" player in EVE. None of these petitions have ever been granted. 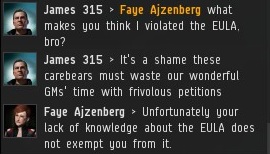 Faye wasn't merely a garden variety petitioner, though. Her supreme confidence in her incorrect interpretation of the EULA marked her out as a proper space lawyer. 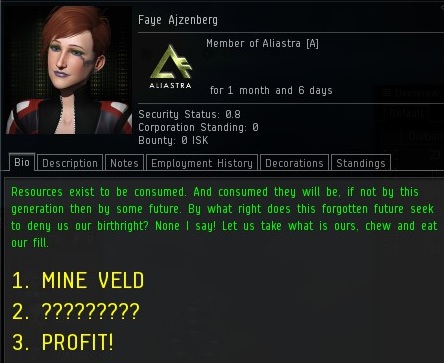 Space lawyering is not a rewarding profession, but neither is it lucrative. As such, most space lawyers are strictly part-timers. They support themselves through AFK mining, mostly.

I asked for a citation of the EULA provision I was in violation of, but Faye became silent once more. 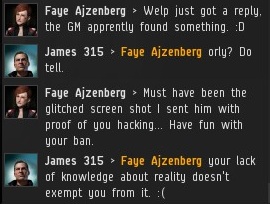 By this point, I suspect Faye had received the standard-form response from a GM, declaring the legality of miner bumping. Based on previous experience, GMs actually read most petitions within minutes--the delay only comes in their responding to them. For bumping petitions, denials come quickly, since they're dealt with on a routine basis. 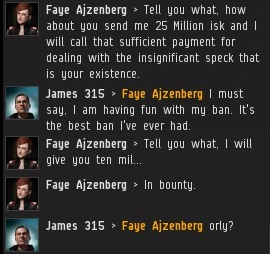 Faye was stunned by the fact that I showed no fear of being banned. So she did the only thing she could think of... 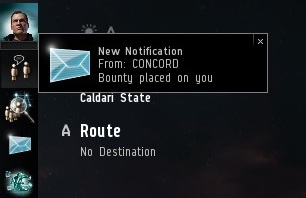 She made good on her promise, adding another 10 million isk to my bounty. Prior to the Retribution expansion, many carebears placed hope in the new bounty system as a means of destroying the New Order. Faye was retro!

I have flown the same Invincible Stabber since I purchased it in June 2012. Not a single isk of bounty has been collected. Clearly, the 10 million isk would have been better spent on a mining permit. 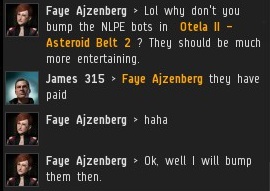 Faye then attempted to redirect my attention elsewhere. I told her that some bots had already "paid". However, I did not say that they paid for permits; they had paid in the sense of having been bumped (and ganked) previously.

Believing they were Code-compliant supporters of the New Order, Faye swooped into action, attempting to bump them out of the belt. Sadly, she was only flying a Federation Navy Comet, not suitable for bumping. But her heart was--unbeknownst to her--in the right place. She was doing the work of the New Order. Ineffectively, yes, but still doing it! 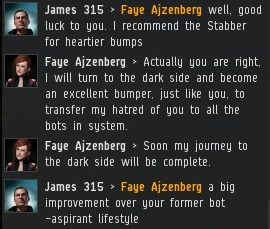 And so the space lawyer was transformed into a productive citizen of highsec. Will wonders never cease? Not at this rate.
Posted by MinerBumping at 18:19