When carebears start wishing cancer on other EVE players, that can only mean one thing: It's time for yet another edition of the Highsec Miner Grab Bag! 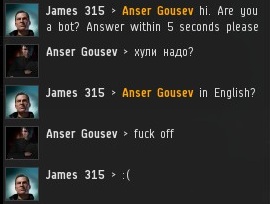 I have said on many occasions that if someone doesn't appear to speak English, they usually do, if you just ask. No guarantees that you'll like what they say, though.

Most people don't make a big deal about my CSPA charge of 315 isk, but I get the occasional complaint. Hig Hurtenflursts was willing to give me a pass, at least on that point. 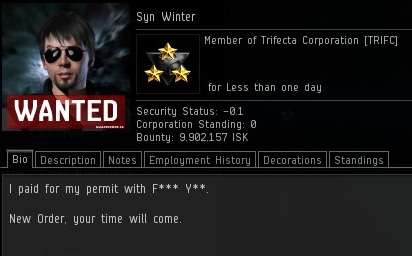 You know the drill by now. Syn Winter has already changed his profile since I took this screenshot, so we're safe. 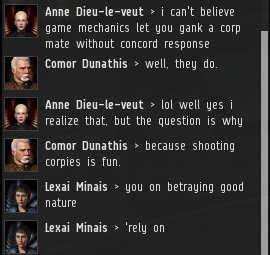 Stay vigilant, guardians of emergent gameplay. One day the carebears will come for our awoxing rights. 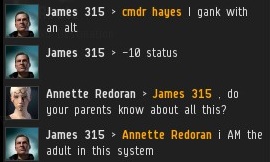 You've probably heard the expression "the adult in the room". I was the inspiration for it.

Now that I'm a rock star, I can have a positive impact on people just by being in the same system with them. No one can deny that I've kept my promise to only use my celebrity for good. 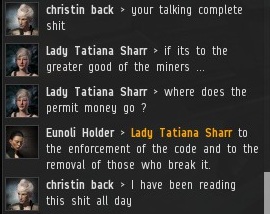 The christin backs of the world need to hear about the Code over and over before it has an impact. It's like chopping down a tree by repeatedly hitting it with an axe in the same place. 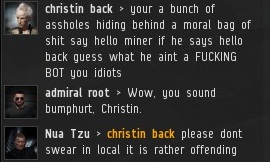 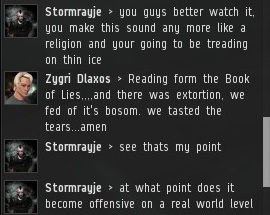 I'm not sure why people compare the Code to a religion or a cult. Does doing good deeds necessarily require a supernatural motivation? Many Agents simply enforce the Code because it feels good to help others. 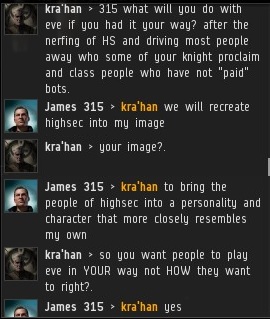 Too often, people get fixated on the idea of EVE as a sandbox. To me, it's more of a meta-sandbox, in which I construct the boundaries of everyone else's sandboxes. Luckily I'm not a tyrant, so people can mostly do whatever they want. 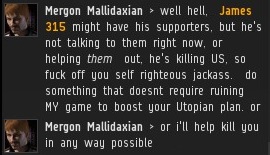 Mergon Mallidaxian is a perfect example of a guy who doesn't "get" the meta-sandbox. What's the point of a multiplayer game in which the players don't influence each other? 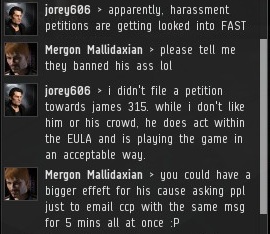 By this point, I wouldn't blame the GMs if they made it a policy to just automatically close any petition that refers to James 315 or the New Order.

Until next time, stay classy, highsec!
Posted by MinerBumping at 17:43