Here on MinerBumping, if it's Sunday, it's Kills of the Week. Let us commemorate some righteous suicide ganking that occurred during the period from April 7th @ 00:00 EVEtime to April 13th @ 23:59 EVEtime. 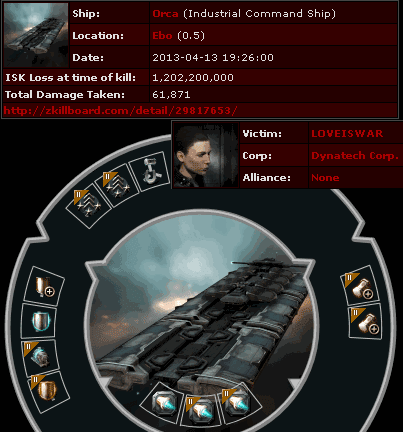 KILLMAIL
It's hard not to start with an Orca kill, eh? The ship belonged to LOVEISWAR. For want of a 10 million isk permit, she lost 1.2 billion isk, the Orca bill having been inflated by the tech II cargo rigs. You would think a massive cargo bay, ore bay, ship hangar, and corporate hangar would be enough, but bot-aspirants need every bit of space they can get, in order to minimize the amount of interaction they have with the game. 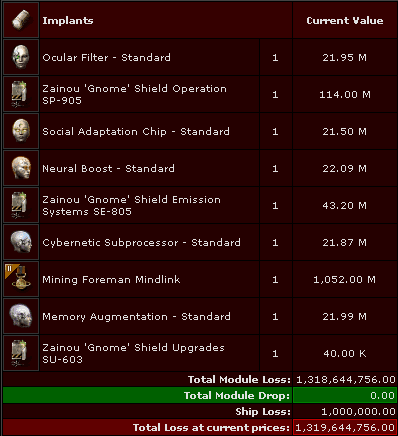 KILLMAIL
LOVEISWAR could have escaped with her implants, had she not been AFK. Dante Lobos delivered the killing blow, wiping out an additional 1.3 billion isk and delivering another Mining Foreman Mindlink into oblivion.

Still not satisfied? The ever-growing power of the New Order means plenty of dead Orcas; I can hardly keep track of them all. You can feast your eyes on the killmails for Ranqu'taj's dead Orca and Luthien DeTelerin's dead Orca at the links. (Luthien's Mackinaw also went to its doom from when the ship hangar went kablooey--very efficient!) 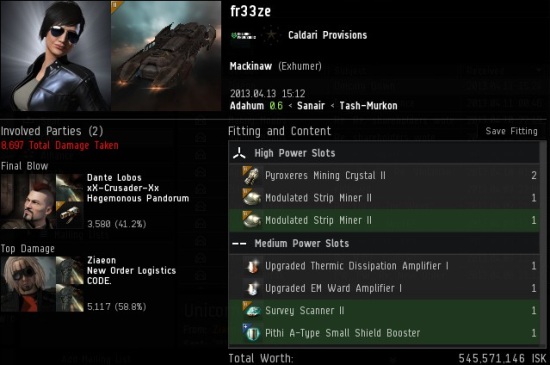 KILLMAIL
fr33ze proved how much Mackinaw pilots love their small shield boosters when he put a Pithi A-Type on his mining ship. Though expensive, such modules offer almost no protection against suicide ganks. Does this mean carebears are willing to spend hundreds of millions of isk on fancy boosters that do nothing but protect them against 0.6 rats? That might make sense in a single-player game, but Dante Lobos and Ziaeon were not amused. The other thing that got proven: Sometimes the Loot Fairy actually drops the good loot. 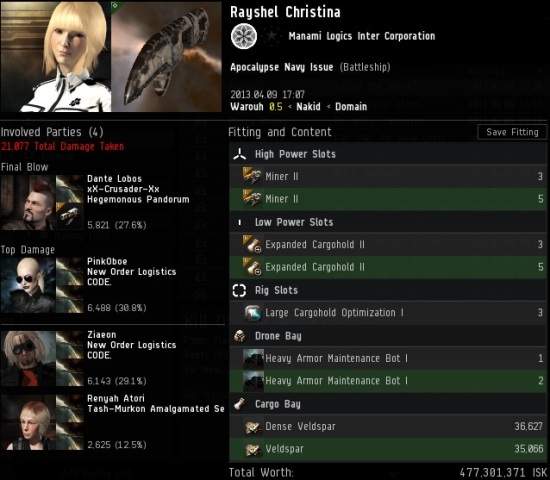 KILLMAIL
For the final Kill of the Week, Rayshel Christina piloted something that you would expect to find in a grotesquerie, not in the New Order's perfect highsec. Yes, it's a Veldspar-mining Navy Apocalypse. Knights PinkOboe, Ziaeon, Dante Lobos, and Renyah Atori understood that such ships do not belong in this world, and they hurriedly cast the abomination out of it. (Dante also crushed its 200 million isk pod.)

Why would someone fly something like that? It's the end result of chronic bot-aspirancy. If EVE is all about gathering isk with as little effort and as much safety as possible, it makes perfect sense that even grand combat ships would be repurposed for AFK mining. Rayshel Christina's Veldspar Navy Apoc is but a specter of the carebear theme park to come. But our Knights violently oppose such things. They believe, fervently, that EVE is a sandbox meant for humanity, not bot-aspirancy. So they stand guard, striking down the carebears on behalf of all humanity, on this night, and all the nights to come.
Posted by MinerBumping at 21:08