Hello! I'm the Saviour of Highsec, you're you, and this is Highsec Miner Grab Bag #28!

My critics say that I make a lot of enemies wherever I go, but I find that it's usually the miners themselves who tend to alienate people.

Abriel L illustrates one of my pet peeves: When miners return to their keyboards 15 minutes after being bumped out of range, and then complain that they aren't AFK. Carebear, I know you're not AFK at the time you send me the EVEmail. That does me no good. I want you to be at your keyboard when I'm speaking to you. 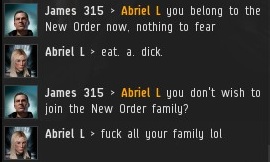 The New Order believes in family values. If you don't have a family or the one you've got isn't any good, we'll provide one for you. But the miners are all lone wolves with no respect for the family... 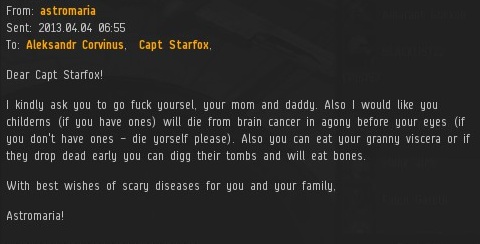 A simple "no thanks, I don't want a permit" would suffice. You'd continue to get bumped and/or ganked for not having a permit, but still. Miners act like being polite will hurt their isk/hour ratio. 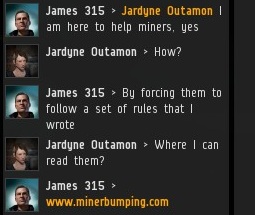 I was convoed by a Russian miner after he she was bumped out of range. At first, progress was being made... 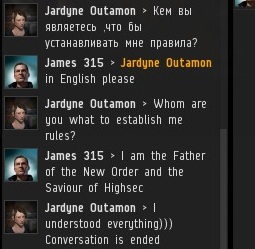 Maybe I would get further if I didn't stand on ceremony and rattle off my titles like that. But she did ask.

The New Order has captured the imagination of the EVE community precisely because we do what seems impossible to other men. 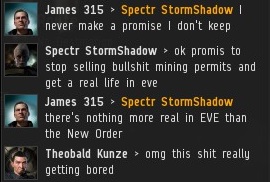 There's another reason we're so popular: If all you had ever done in EVE was putter about in highsec collecting space rocks, wouldn't the sudden appearance of the New Order excite you? 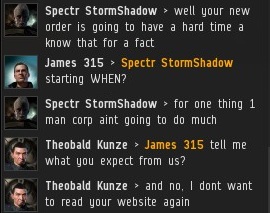 Spectr StormShadow believes one man cannot make a difference. About ten months ago, most people would have agreed. Now look at where we are. That's destiny for you!

It's difficult to parse his comment, but Spectr read the Code and came to the conclusion that it has something to do about 12 year-olds in their mothers' basements. I think he was trying to spit a Miner Bingo square at me and it came out wrong. 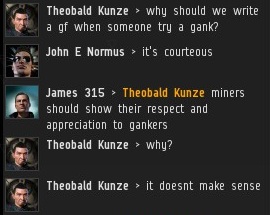 Theobald Kunze questioned one of the more controversial provisions of the Code, in which we seek to build an enduring relationship between the miner and ganker communities. 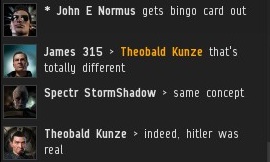