Rage of the Russian Renegade, Part 1

EVE isn't just a game for the English-speaking world; it attracts good players and bot-aspirants from all across the globe.

The New Order, too, is an international organization. We are famous throughout the EVE galaxy. Every community in highsec has been touched by us, irrespective of differences in language and custom. The Code is by far the most widely-read EVE-related document. It has been translated into a multitude of different languages--see here for a Russian example. No one has an excuse for not following the Code. 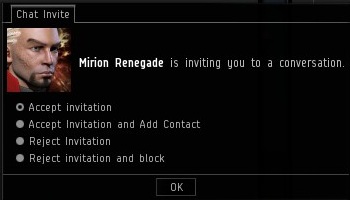 After bouncing Mirion Renegade from his illegal mining operation, I immediately received a convo request. A hint for future clients: Don't be like the people who only get chatty after I remove them from their space-rocks. Talk to me when I talk to you. 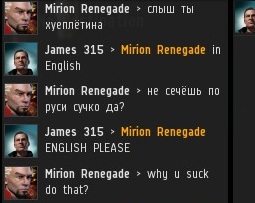 Renegade started off the convo in Russian. I've usually found that requesting English a few times results in the miner miraculously learning at least some English. 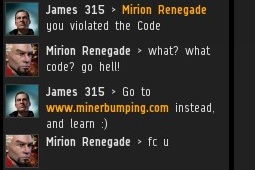 Renegade feigned ignorance of the Code. I played along and URL-dropped. This revealed his true colors. Renegade terminated the convo. 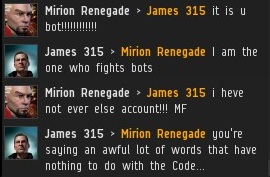 However, while I was going about my business telling other miners in the system what to do, Renegade decided to speak up in local. Hint #2: Don't try to take me on in local. It's my home turf. 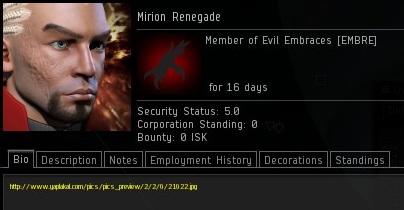 They may all look alike and sound alike, but each carebear is slightly different. That's why I tailor my approach, depending on the unique defects of the miner in question. I was surprised to see that the Veldspar-mining Retriever pilot was actually a 2010 character. Strangely, he had nothing but a small URL in his bio, which led me to this: 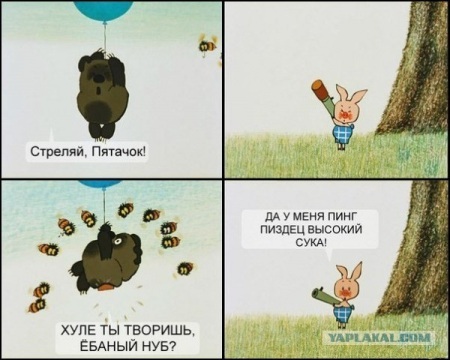 The disadvantage of cartoons in foreign languages is that you can't drag & drop the text into Google Translate. I was therefore unable to learn anything new about the nature of Renegade's problems. 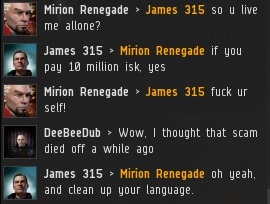 Mirion Renegade is what we in the business call a real "fixer-upper". 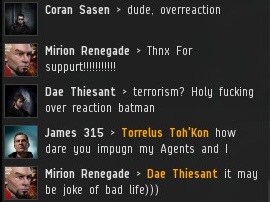 The locals of Osmon began to take an interest in Renegade. His fellow miners took his side--to varying degrees. 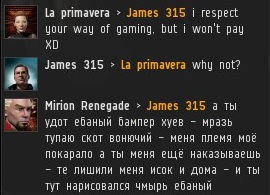 I continued to help other miners in the system follow the Code, but Renegade would not be silenced. From time to time, I pasted his comments into Google Translate, just in case he was turning over a new leaf and apologizing.

The reference to "ISOC" may be a Russian "Internet Society". If so, I can't imagine why they would kick him out. 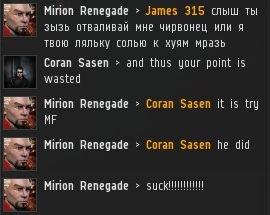 Renegade attempted to draw in allies like Coran Sasen, who had also refused to abide by the Code. They were of little help. 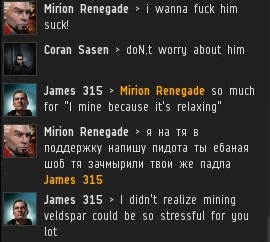 Normally a bumped miner's temper dies down after awhile. But as time went on, it seemed Renegade only became more incensed. 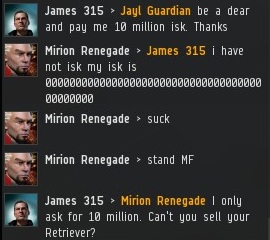 Now, for the first time, Renegade claimed financial hardship. If he really lacked the isk to pay me my 10 million, you'd think he would've led with that argument instead of the whole "cattle smelly" thing. Following standard protocol, I instructed him to sell his mining ship to pay for his mining permit.

Renegade's emotions were getting the better of him. I did my best to calm his nerves, but I was running out of ideas. Most people would cut their losses at this point. Most people aren't the Saviour of Highsec. I was determined to bring Mirion Renegade into civilized society, no matter the cost.