The Duel That Was, Part 1

The Code is a crucible. Some people, when they see the Code being enforced, move to embrace it. Others are enraged by it. More often than not, one can quickly tell whether a person is good or bad by the way they react to the New Order. 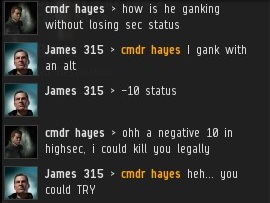 cmdr hayes immediately took offense when he witnessed me enforcing the Code in the ice fields of Osmon. 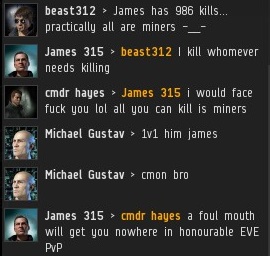 hayes flirted with the idea of engaging me in battle. He wasted no time in demonstrating that he was not a gentleman. 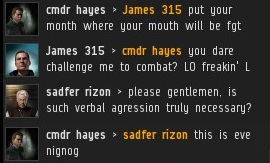 The Osmon system, normally so sleepy despite the hundreds of mission-runners who make a home there, sprang to life. 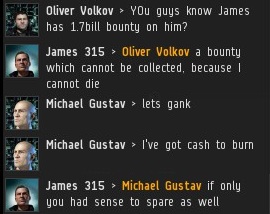 Even Oliver Volkov, the miner I had bumped, awoke. The locals plotted how to destroy me, but for the most part seemed to want someone else to do it. 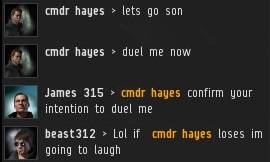 hayes' intentions crystallized. He sought blood, ostensibly in defense of the honour of the AFK miners. 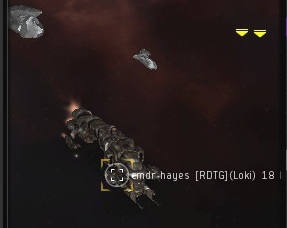 When CCP first introduced battleships to the game, they declared adamantly that balance would be maintained--they would not create a "solopwnmobile" ship class that could do everything. CCP was true to its promise. Years later, growing bored, CCP created the tech III strategic cruiser. hayes brought a Loki, the Minmatar strategic cruiser, into the ice field. 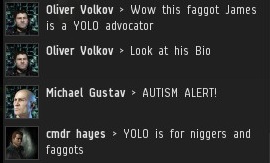 While hayes yellow-boxed me in his Loki, the rebels grew ever more ravenous for New Order blood. Either that, or they always smacktalk in this fashion. 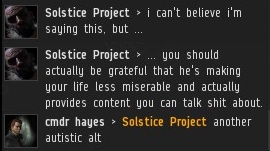 As with many rebels over the months, they became convinced that anyone who didn't follow the party line must be my alt. Never a wellspring of creativity, they also began to play the "autism" card--a jibe used so frequently in conjunction with EVE that it has long since lost all meaning. 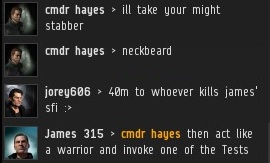 With local spiralling out of control, I gently guided the rebels back onto the track prescribed by the Code.

When situations like these develop, there are often bystanders eager to see an actual duel take place. Stephen Leibniz urged them to follow the Code and invoke a Test. 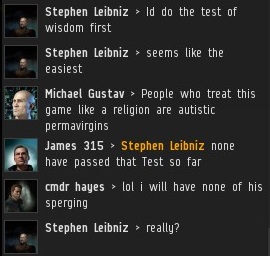 The Test of Wisdom is the only Test ever to have been invoked. It has been invoked on several occasions, but has never been completed successfully. 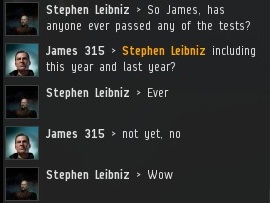 And frankly, cmdr hayes didn't look like he would be the first. But then fate intervened.

Agent Arden Elenduil, who was also bumping miners in the ice field with a Stabber Fleet Issue, did the unexpected: He jumped into the fray, challenging hayes to a duel! hayes eagerly accepted the duel; he was confident that a Loki would have no problem destroying the bumping ship. Arden, on the other hand, did not place his faith in such worldly calculations. He placed his faith in the Code. And now, in front of everyone in Osmon, the faiths of these two men would be put to the ultimate test.