If you've been a MinerBumping reader for a while, you might recall hearing the name "Capt Lynch".

He's had a grudge against the New Order for quite some time now. 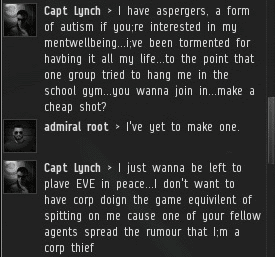 Lynch is also a relatively unstable element in the great melting pot that is the highsec community. 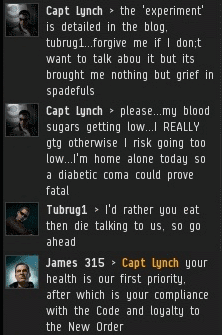 Even so, the New Order has tried to lend a hand, whenever possible. Some months ago, Capt Lynch changed loyalties for the Nth time and purchased 1 billion isk worth of New Order shares.

In the meantime, Lynch switched his allegiance to the rebellion at least a few times.

It's not clear what events Lynch was referring to in his chat with killdashnine, but then again, I haven't followed the Lynch saga very closely. 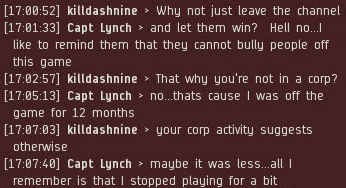 Whether the "hair dryer" incident or "al quaeeda" incident actually occurred, I leave to the judgment of the reader.

Lynch and the truth are not the best of friends. To be generous, they're acquaintances who can't quite remember each other's names. 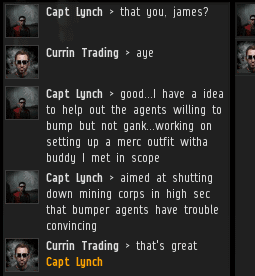 As I was enforcing the Code with my ganker alt, I was contacted by Capt Lynch. He had a Ledrian-esque plan to create a pro-Order mercenary outfit to prove his loyalty to the New Order. 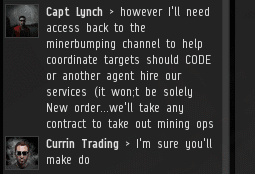 The plan had been jeopardized by the fact that Lynch had recently gotten himself banned from the MinerBumping channel. His offense was going down the list of the channel participants and setting them all to "Terrible" standings (each time sending them a notification of it). That didn't win him any friends. 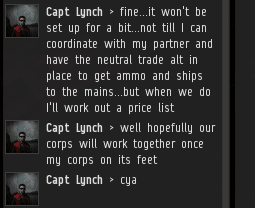 I wished Lynch the best of luck in coordinating with the New Order without the benefit of having access to the channel. I wasn't exactly prepared to roll out the red carpet for him. He would need to work from the outside. 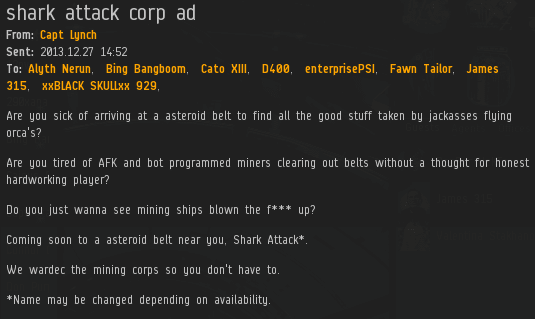 Lynch sent a sample advertisement for "Shark Attack". The name, of course, was subject to availability. (Because it's not like EVE players can check whether a corp name has been taken?) 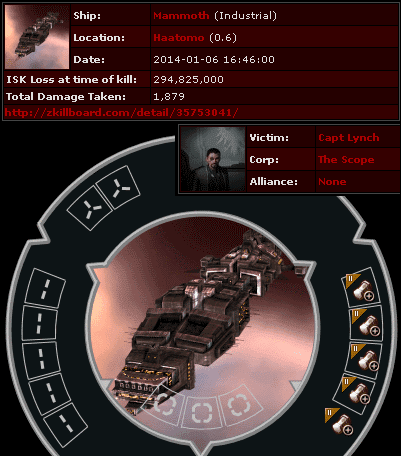 As the situation developed, however, a disturbing report about Lynch came from the Haatomo system. A friend of Agent D400 spotted Lynch flying a massively anti-tanked Mammoth. Worse yet, he'd gone AFK with it. A clearer violation of the Code there could not be. The conclusion: Lynch had switched sides again. Jade Korinta, the witness to the crime, had no choice but to gank Lynch. 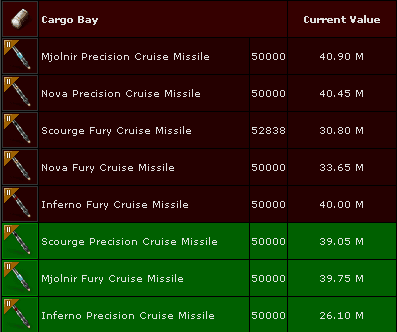 Let this be a lesson to all who would play both sides in highsec. You can talk the talk--you can even donate isk--but at the end of the day, your actions will reveal where your heart is. I am confident that some day Lynch will give his loyalty permanently to the Code. Until then, he goes AFK at his own peril. In all, nearly 300 million isk went up in smoke. The contraband gave new meaning to the phrase "giev missl or bump".
Posted by MinerBumping at 20:13