The Code plays an important role in highsec life today. The Code page on MinerBumping has, on its own, received 82,000 hits. I've estimated that more EVE players have read the Code in its entirety than have fully read the EULA. Yet, sometimes, carebears misinterpret the Code. 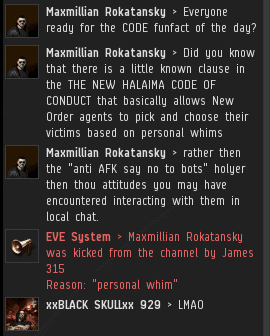 When a carebear's reading comprehension fails, it's no big deal. We have plenty of time to correct their troubled minds. On the other hand, if CCP gets involved, the New Order must swing into action immediately.

I logged into EVE and noticed that the "Help" button in the side panel was flashing, the same way that the EVEmail button or Wallet button might flash when it wants to get your attention. The petition system is handled through the Help interface. Normally, EVE players are the ones who open support tickets. On this day, it was a GM who opened a support ticket with me. 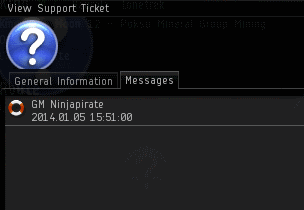 I'd received a message from GM Ninjapirate, a Senior GM. For those who have not yet had the pleasure of dealing with the EVE petition system, that's what it looks like. If it were possible, I would also like to be able to send an image of a life preserver when I EVEmail people. I'm the Saviour of Highsec, after all. 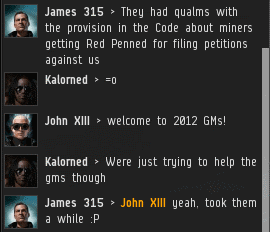 GM Ninjapirate took issue with a provision in the Code. This might come as a surprise, since the Code has been around since June 2012. And the GM staff have certainly had occasion to read it. The New Order inspires more petitions than any other organization in EVE.

The revision of the Code, it seems, was a top priority for CCP. Not since Mine Teck set deadlines for joining the "resistans" have I seen such urgency. The matter needed to be handled much more quickly than, say, the CSM meeting minutes. 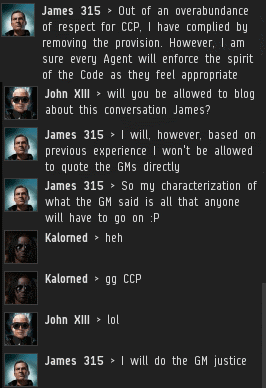 With the speed of an action hero, I revised the Code to CCP's satisfaction. But what exactly was the problem with the Code, in CCP's eyes? I would like to quote the GM's explanation, but I am not permitted to do so. You'll recall that last summer I posted screenshots of a year-old conversation I had with a GM who helped me come up with the idea for the Code. CCP retaliated by deleting my bio and threatening me with a permaban. GM communications must be kept absolutely secret, at least, in their original language. They can't be quoted or screenshotted directly. However, I was informed that we are allowed to summarize and paraphrase what a GM says to us.

However, I shall do my best. The offensive Code provision was as follows:


"To minimize the workload of our GMs, miners shall not file petitions against the Supreme Protector or his Agents. Failure to abide by this rule is an automatic Red Pen violation..."

Senior GM Ninjapirate had two objections to this provision. The first objection was my use of the phrase "our GMs". He felt some miners might think that it implies the GMs belong to the New Order rather than CCP, or that they otherwise endorse the Code. As much as I love and appreciate the work that the GMs do--CCP's GMs, mind you--I must disagree with this assessment. Nevertheless, I concede that carebears can become confused easily.

The second objection, in my view, was one that I couldn't fix just by rephrasing the provision. GM Ninjapirate explained that all EVE players have a right to petition and that no one should try to "fool" anyone into thinking they don't. Based on the way the provision was written, I think it was quite clear I wasn't saying a carebear can't file a petition against an Agent, but that they would be given the Red Pen penalty for doing so. Why would the New Order need a special punishment for something that CCP won't let carebears do? 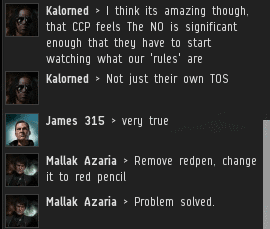 Regardless, I removed the provision to meet CCP's needs. Perhaps we shouldn't be too surprised that the Code is being studied more carefully now than it was a year and a half ago. The Code is law in highsec, where most EVE players reside. It will be treated as an increasingly important document as the compliance ratio increases. 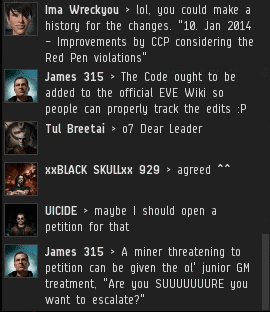 Despite the thousands of petitions filed against us, no Agent of the New Order has been banned for even one day. And until now, no provision of the Code has ever been objected to by CCP. Now, I'm not saying that means CCP "endorses" the remainder of the Code, but I do think it's worth noting that they could have objected to other stuff in there, and haven't yet. 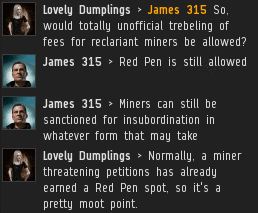 Returning to the subject of the removed provision, let me be clear: The removal of the provision should not be taken as a license for carebears to file frivolous petitions. Agents of the New Order have broad discretion in determining when someone has violated the Code. Even if something is not written as a provision in the Code, the spirit of the Code emanates forth from the provisions, and the Agents enforce that spirit. Bot-aspirants of highsec, tread carefully.
Posted by MinerBumping at 19:37