The Family that Mines Together

In recent days, there has been much talk about EVE players who mine in highsec with their children. Pertinent to that, I bring you a report from Agents Kalorned and Zkanu, who were busy selling permits in the Gamis area when a notable incident took place.

Agents of the New Order do a lot of "cold calling" for permit sales, but very often we are the ones who get contacted by the miners.

After a cursory review of the Code, miner Nakao DarkSword quickly understood that the New Order is a force for good in highsec. No one has brought more peace and prosperity to the miners than we have.

Word spread in an instant. Nakao began helping others get their permits. Her first priority? Her own children.

Kalorned was pleased. The family that mines together buys permits together. That's the way it should be.


Kalorned > I added them as blue
Nakao DarkSword > ok good. I don't want to see them get attacked. They'll probably cry if their ships explode
Kalorned > That would be bad
Nakao DarkSword > Their 10 and 12. I'm surprised they can play this game. Although sometimes I do have to reset their UI so I can find stuff here and then.
Nakao DarkSword > I'm trying to get others in on this so we can all travel together without worries.
Kalorned > Sounds good

Before you say anything, I know what all you carebear apologists, rebels, and skeptics are thinking: "There go the New Order bullies again, extorting little children or making them cry." Nonsense. There's no reason a young child should not be expected to follow the Code. You wouldn't want a 10 year-old to commit murder, would you? Mining without a license is no different. And while it's true that a 10 or 12 year-old might cry if their ships explode, how would that make them different from any other miner in highsec?

The entire system was falling into line right before our heroes' eyes. Some days progress is fast, other days it's slow. But our Agents always log off for the day leaving highsec better than they found it.

Suddenly, Kalorned was convo'ed by DivineWind Musashi. He was Nakao's husband and the father of the two permit-owning children. Could an entire family join the New Order family, or would he scold his wife for spending irresponsibly?

DivineWind followed his wife's lead and bought himself a mining permit. You know, so often these days it's the mother who wields the most influence over her family's purchasing habits. Thank goodness Nakao was such a discerning consumer.

In less than an hour, Kalorned and Zkanu had gotten ten new miners to comply with the Code. It was a golden age for the tiny Gelhan system. At that moment, everyone in local was either an Agent of the New Order of a permit-holding miner. 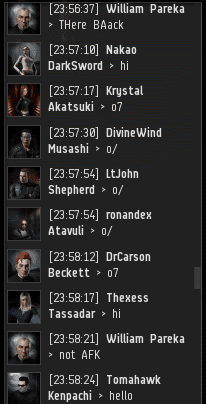 When our Agents passed by the system later, they were greeted warmly, hailed as conquering heroes. It was like something out of a fairy tale. But EVE is not a fairy tale--it's real life. Over the next few days, the leadership of AstroLogistics Inc. corp of Subspace Exploration Agency alliance, which the miners were members of, instructed them to remove their permits from their bios. They did, causing them to waste the 100 million isk they'd spent on permits. Now Nakao and her husband and two small children are again at risk of being terminated for violating the Code. It would be a tragedy if anything happened to them. And yet, it would be justified. The Code exists to serve the greater good. In the end, only one family in highsec truly matters: The New Order family.
Posted by MinerBumping at 20:49