On occasion, a carebear will accuse one or more Agents of the New Order of improperly enforcing the Code. All such accusations are treated as seriously as they deserve to be. And so far, every single Agent has been vindicated. 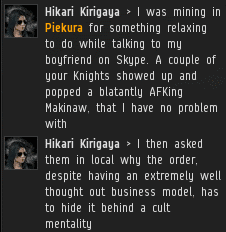 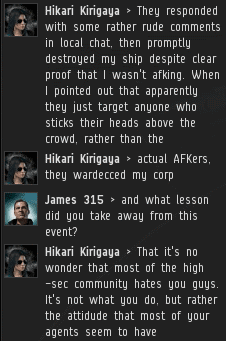 You might recall Hikari Kirigaya's complaints, which I mentioned in an earlier post. On instinct alone, I was able to dismiss the carebear's accusations as groundless. That's how good I've gotten at this.

Nevertheless, the Agents in question immediately responded to Hikari's charges by producing evidence of their good conduct. The story began as Agents Ophidia Black and Lenda Shinhwa were enforcing the Code by destroying Bendai Schrodinger's Mackinaw.

Bendai was upset, but our heroes managed to calm him down. Just another day in highsec.

Bendai, like a lot of residents of nullsec--or lowsec, or wormhole space--spends all his time mining in highsec. Our Agents have no biases. They treated Bendai like the rest of the criminals they have to deal with. Then they moved on to another system and destroyed another illegal Mackinaw. 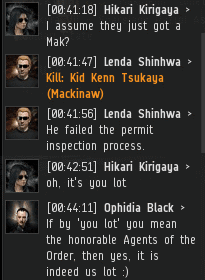 After witnessing the AFK Mackinaw go kablooey, Hikari spoke up. The initial signs weren't good. She was dismissive of the New Order right out of the gate. Remember, Hikari later told me that she was considering becoming a New Order Agent at the time. Sure. 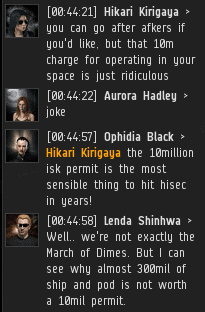 Hikari stirred up rebellious sentiments in local by challenging the wisdom of our permit sales. For an alleged Agent-aspirant, it's interesting that she couldn't think of anything good to say about the New Order. 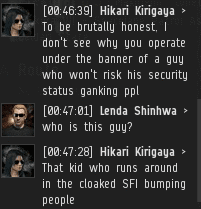 Then Hikari began spreading disinformation about me, and calling me a "kid". The Miner Bingo squares only began to light up. 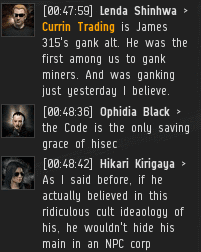 Despite being aware that my main doesn't have a -10 security status, Hikari was unaware that I am not in an NPC corp. Yet she would've needed to view my profile to see my security status. Clearly, she was no innocent miner. She was a rebel, through and through. 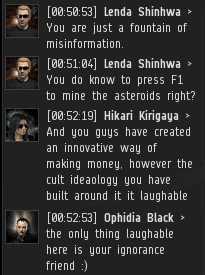 At this point, our Agents had heard enough anti-Order propaganda from the permit-less miner. They decided to act. They suicide ganked Hikari's speed-tanked Retriever. Would she give them a "gf" in local? 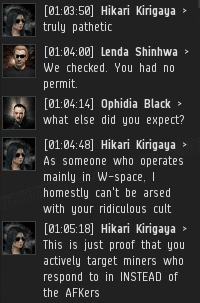 Hikari bristled. But she shrugged off the loss. Like the rest of the highsec miners, she wasn't really a highsec miner. 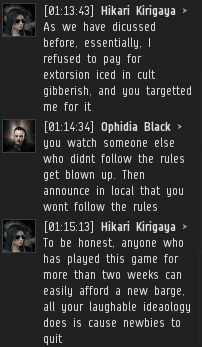 Robbed of her Retriever, Hikari now felt comfortable venting her rage against the New Order. She condemned us for chasing newbies away from EVE. Yeah, she was totally a fan of ours until the Agents mistreated her. 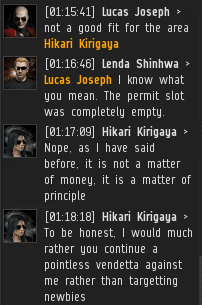 After marking up a few more Miner Bingo squares, Hikari flounced from the conversation. Later, her corp received a wardec, and she blamed the New Order for silencing dissent.

Obviously our Agents were right about everything, and Hikari was wrong about everything. The evidence merely validated my initial, instinct-based investigation. But this wouldn't be the final word on Hikari. No, it was time for carebear karma to kick in. 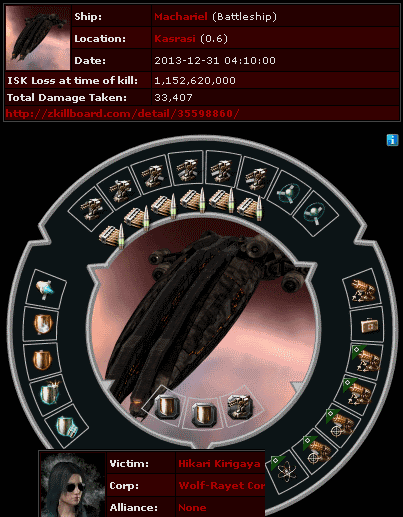 You see this? It's a 1.1 billion isk Machariel that Hikari lost a few days later. You might assume she was killed by one of those nasty wardeccers. Not quite. In fact, Hikari managed to get herself CONCORDed by randomly attacking someone's Legion in highsec. This is one of the pricier gank ships I've seen. Needless to say, the Legion survived.

So the story had a happy ending. But you know, some carebears need two visits from the karma fairy. 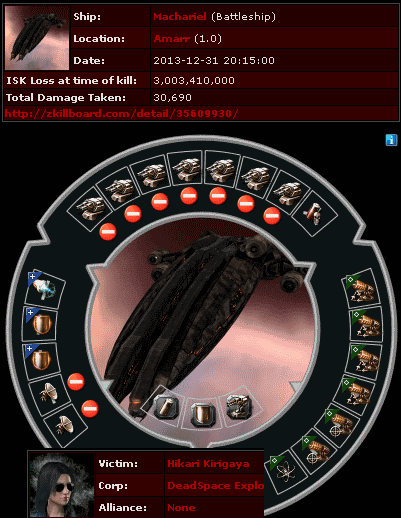 Several hours after losing her first Machariel, Hikari went to Amarr to shop for a replacement. When she undocked in her shiny new 3 billion isk Machariel, someone activated the kill right that had been earned when she tried to gank that Legion earlier in the day. Twenty-one random Amarr citizens were only too happy to pile on.

Case closed.
Posted by MinerBumping at 21:27