If You See Something, Say Something 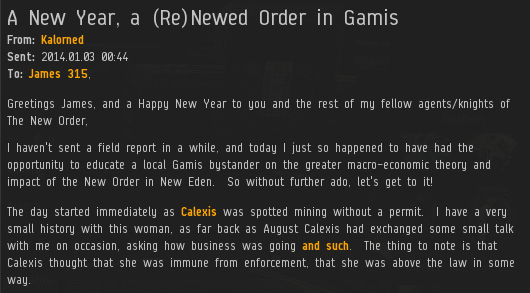 Agent Kalorned is well known in the highsec community as an advocate for miners. Legal miners, that is. There's no reason anyone with a rational mind would support illegal mining.


Calexis > How's business?
Solicia Starshield > scamming again i see
Kalorned > Calexis Doin alright
Calexis > I'll say this about Kalorned . He doesn't shoot me down :) I'm sure some of you wouldn't give killing me a second thought ;)

Illegal miner Calexis was setting a bad example, openly defiant of the Code. But contrary to what the rebels would have you believe, Kalorned gave her plenty of chances to reform.


Kalorned > Good Evening Calexis , this space is claimed by The New Order of High Sec and is subject to The New Halaima Code of Conduct http://www.minerbumping.com/p/the-code.html
Kalorned > You must obtain a mining permit in the amount of 10m, good for one year, to continue mining. Failure to have a permit will result in my having to bump your ship away from the belt until such a time that you become compliant.
Calexis > Not tonight, but thanks.
Keraina Talie-Kuo > Kill: Calexis (Mackinaw) Mining without a permit in New Order space is not permitted 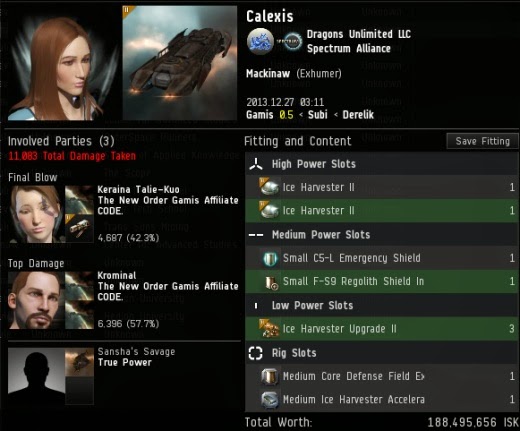 Sometimes the mouthiest miners have the worst tanks. After being shamed in public, Calexis decided to "beef up" her tank and return to the belts a few days later. 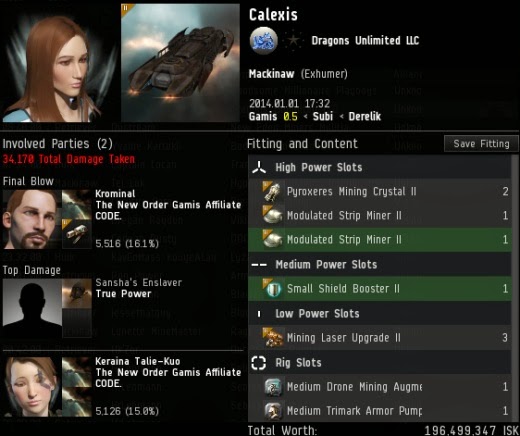 "Beef up" might be generous: She merely swapped out a shield extender for an armor rig. Calexis was put out of business, but new threats emerged in a nearby system.

The rebels were on the run, and they left their "friend" to die. 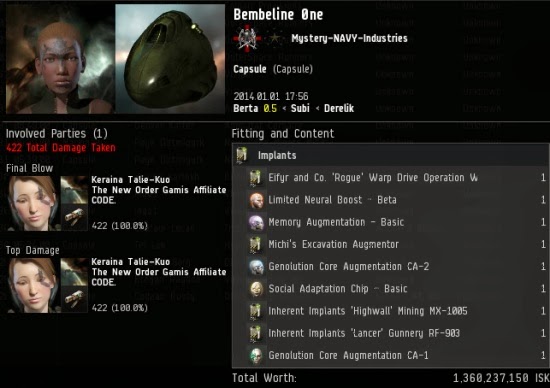 In the end, every rebel learns that their real friends are in the New Order. The police are not the enemy. The criminals are the enemy, even to other criminals.

Over time, the New Order wins hearts and minds as well as battles. Responsible citizen Peter Romonav saw something terrible happening in Gamis. So you know what he did? He went to Agent Kalorned for help. Peter had learned the New Order is here to protect highsec. 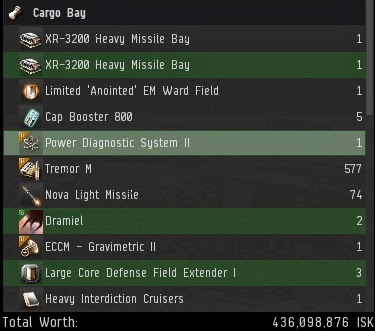 Kalorned called upon all the strength and power he possessed and defeated the AFK industrial ship in battle. 436 million isk worth of contraband, some of which is shown here, was destroyed and confiscated. It can no longer be used to pose a threat to highsec.

BONUS! The Battle of the Bar Stargate was filmed and uploaded to YouTube. Now you can witness a piece of Gamis history! An Idle Iteron 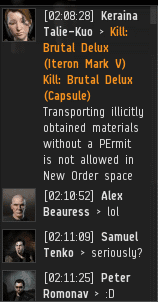 Mixed reactions came from the Gamis locals. Kalorned instinctively realized that this was a teachable moment, so he began talking Samuel Tenko through the logic of the kill. 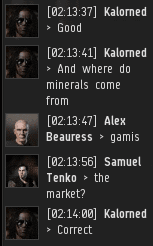 With guided questioning, Kalorned brought Samuel to one inescapable conclusion: The industrial ship had to be ganked for the greater good.

But Samuel still wasn't sure. Not yet, anyway. Like I said, over time we win hearts and minds. 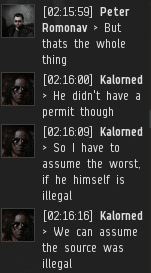 Peter Romonav, the informant, tried to help the locals see reason. Not everyone joined the New Order that day, but Kalorned held their complete attention. 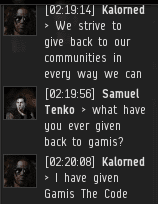 In the end, for his services as a good citizen to highsec, Peter Romonav was awarded a portion of the loot from the Iteron kill. More goodwill was earned, and the New Order strengthened its ties to the local Gamis community. The New Order's reputation as problem-solvers is established anew each day.
Posted by MinerBumping at 18:47