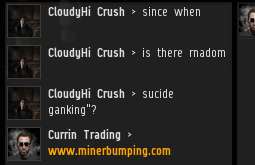 Sometimes a link is worth a thousand words. Welcome to the latest edition of the Highsec Miner Grab Bag! 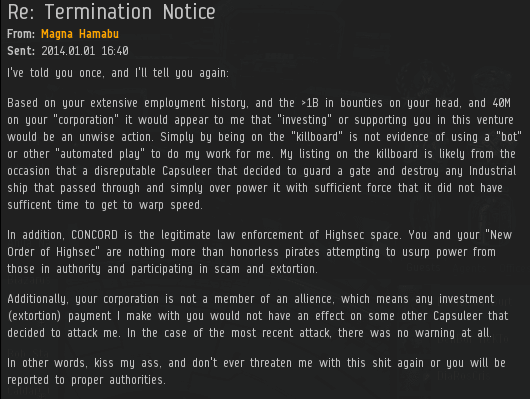 In the case of Magna Hamabu's screed, seen here, it helps to have a trained eye: What did she mean about reporting me to the "proper authorities"?

A few hours later, an unrelated character sent me an EVEmail warning me that he was reporting me to the "appropriate authority". Are we witnessing the birth of a new carebear catchphrase? 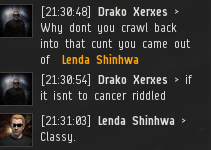 Drako Xerxes provides us with a good example of why miners should say "gf" when ganked. If they start ad-libbing instead, it doesn't always go so well.

Carebear logic at its finest. They're not bots; they just have machines that play the game for them.

The New Order loves new players. We don't fetishize them like the carebear advocates of a risk-free highsec do, but we value them all the same. Agent D400 showed his love by explaining to the dead carebear that he didn't spoil his game by ganking him...

...But not everyone is cut out to play EVE. That's cool. We don't need billions of players to make EVE exciting. Quality is more important than quantity. Besides, think of the ti-di. Priority has to be assigned somehow, and I'd say give priority to the players who don't put all their belongings in an untanked Badger and go on autopilot.

Ken DiMicco called D400 a fag for ganking his Venture. "Fag" is British slang for a cigarette. But the smoking wreck of Ken DiMicco's mining ship more closely resembled a fag. In contrast, D400 was decked out in a freshly-minted, sparkling new Thrasher by the time the EVEmail arrived! 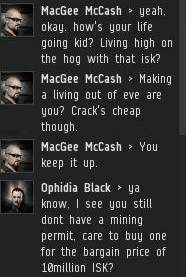 MacGee McCash went for the "class warfare" angle to stir up resentment against New Order Agents. Our Agents are not all rich, though. In isk, I mean. As members of the New Order family they all feel like the richest people on earth.

On the other hand, maybe MacGee was busy putting the "high" in highsec. 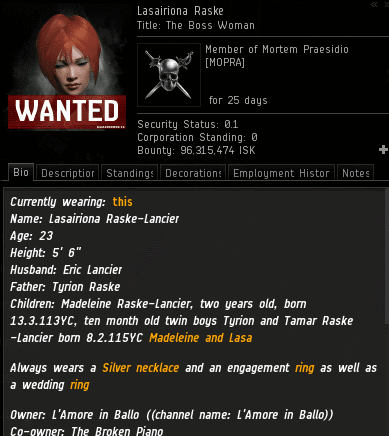 Lasairiona Raske is one of the most dedicated EVE roleplayers we've encountered thus far. Each day she updates her bio to link photos of the clothes she's wearing. She also moderates a roleplayer-only channel. As it happens, a lot of people say that the New Order is a bunch of roleplayers. This gave Agent Sara Arran an idea... 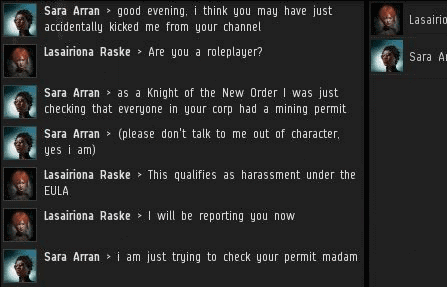