Not much happens in highsec that I don't hear about. Having omnipresent Agents makes keeping track of the hundreds of thousands of highsec residents a lot easier. Is having total knowledge of highsec excessive? Not at all. It's necessary, if we're going to achieve 100% Code-compliance. Which of course we are.

Agent Alyth Nerun reported that he had been randomly contacted by notorious highsec scofflaw Capt Lynch. 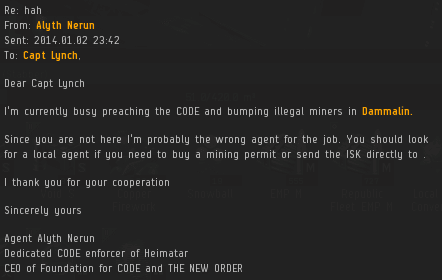 Alyth hadn't had any previous interaction with Lynch, yet Lynch went out of his way to insult him. If he followed his pattern, this would be the part where Lynch turns around and accuses the New Order of harassing him. 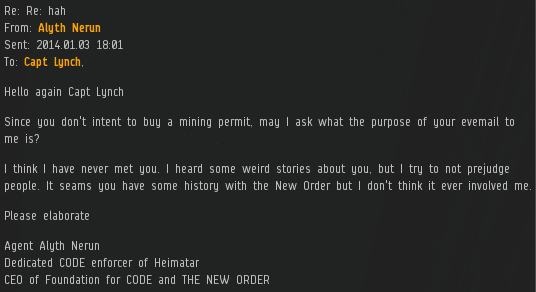 In some ways, Lynch is a microcosm of the highsec community. There are ups and downs. It's a bit like a rollercoaster: One day a happy family of four is fully Code-compliant, and the next day they're violating the Code. Lynch was apparently going through another of his anti-Order phases. 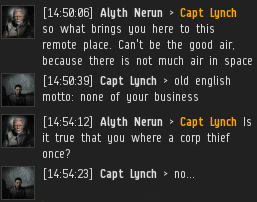 Later, Alyth spotted Lynch in a remote corner of highsec. Lynch followed him! Alyth was still perplexed, so he asked Lynch about his history. 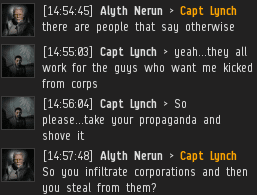 Lynch maintained his innocence. It's true that a corp theft committed by a New Order awoxer was once pinned on Lynch, resulting in Lynch's expulsion from the corp. He's been expelled from a lot of corps, though, so it was bound to happen sooner or later anyway.

During the course of their conversation, Lynch admitted that he funds his EVE activities solely through the purchase of PLEX, which he buys with real money and sells for isk. Classic RMT.

Bizarrely, Lynch still needed to mine ore. He actually paid real money so he could get isk... and then spent his time mining for more isk. When we first encountered Lynch back in 2012, he gave us the old "I'm not a highsec miner, I'm just mining in highsec" line. What excuse would he have this time? 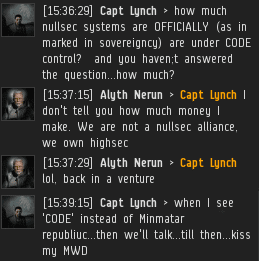 Seeing Alyth's bumping Stabber in the belt, Lynch switched into a Venture so he wouldn't risk bump. Mining highsec ore in a Venture--a sorry fate for a 2009 character. 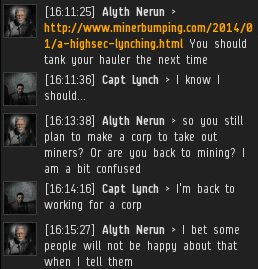 Still trying to untangle the enigma that is Capt Lynch, Alyth directed his attention to a MinerBumping post from the day before. In the post, Lynch had convo'ed me to tell me about his plans for an anti-miner mercenary corporation. Now he was mining for someone's corporation. 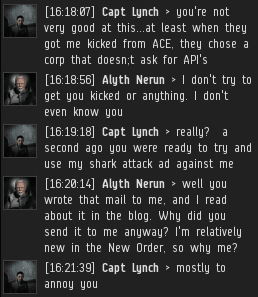 Lynch was sensitive to threat of being expelled from his latest corp. But in a rare moment outside of his default "victim" mode, Capt Lynch admitted that he had singled out Alyth for harassment. 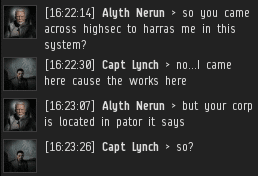 ...After which he immediately backpedaled and made up a story about the corp being located where Alyth happened to be. Classic Lynch. 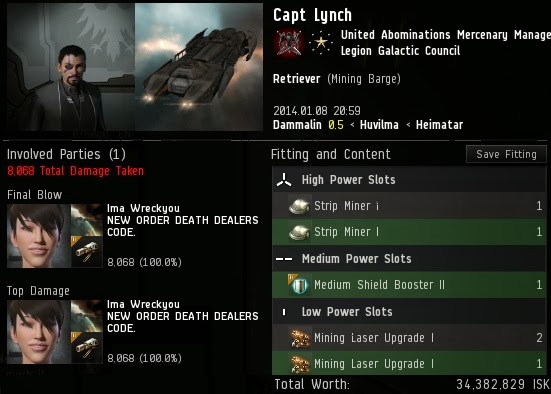 Playing it safe, Alyth logged onto a ganker alt a few hours later and killed Lynch for the crime of illegal mining. After all this time in the presence of the New Order, Lynch still doesn't know how to tank a mining barge, it seems. 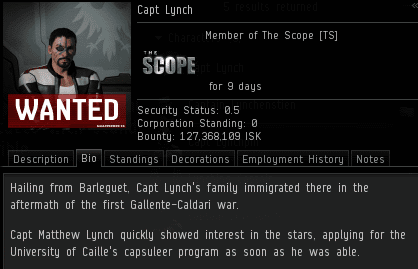 Within days, Lynch had been expelled from his corporation. He probably blames the New Order for this. He shouldn't. The New Order rules highsec, but highsec residents still need to exercise personal responsibility. 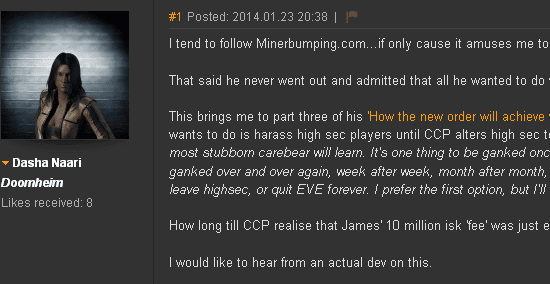 Several days later, I wrote a stirring series of MinerBumping posts about the New Order's path to victory. Lynch responded by using his alt, Dasha Naari, to post a complaint thread about the New Order on EVE-O entitled, "James 315... professional troll?"

Lynch's alt repeatedly denied being Lynch, despite the posts being written in his typical style and relating an anecdote about CCP calling the police to his house. (Not many anti-Order rebels have experienced that, other than Lynch.) 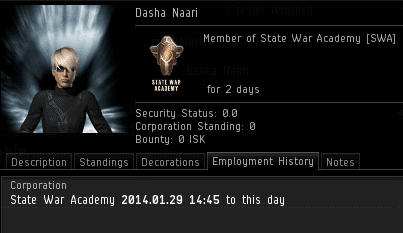 Then, a few days later, Lynch biomassed the alt and re-registered it. Nobody ever said saving highsec would be easy.
Posted by MinerBumping at 19:15