Sometimes carebears have names that don't quite fit, such as "ShadowStrike" the highsec miner.

On other occasions, their names are spot-on. 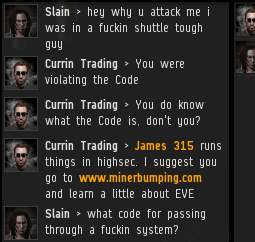 Slain committed a serious violation of the Code by autopiloting through my territory in an untanked vessel. Not satisfied with an EVEmail, he convo'ed me to get answers. He came to the right place. Giving people the answers they seek is, like, 95% of what I do. 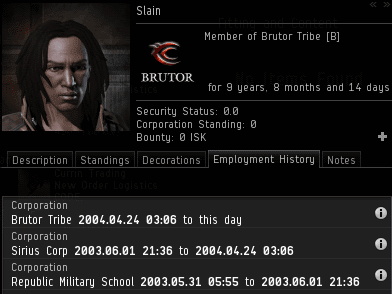 Slain had never heard of me or the New Order before. He was your classic newbie, the kind the New Order is always picking on. Carebear apologists would be horrified to hear of such an incident. The fellow probably has barely more than 100 million skillpoints. 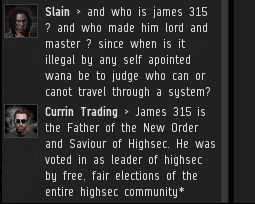 * James 315 acted as proxy for the entire highsec community and cast all votes in said election. This was the only practical means of installing a democracy in highsec.

Hopefully Slain reads this post. Otherwise he doesn't have much chance of viewing the footnote to my comment. 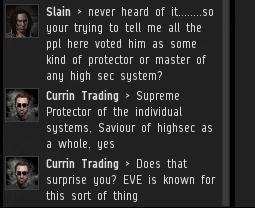 Remember how in the latest CSM minutes a lot of EVE players never heard of the "sandbox"? Well, now one more player knew about the sandbox. 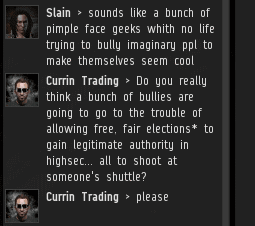 I don't know what kind of childhood all these carebears had, but apparently a lot of them encountered bullies while playing in the sandbox. Probably because an authority wasn't there to keep order. 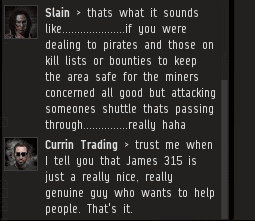 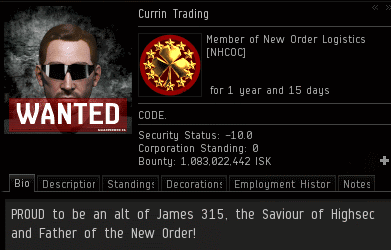 In his ten and a half years playing EVE, Slain had grown bitter and cynical. He couldn't imagine the utopian future we plan for highsec. But for me, it's as real as anything else in EVE. 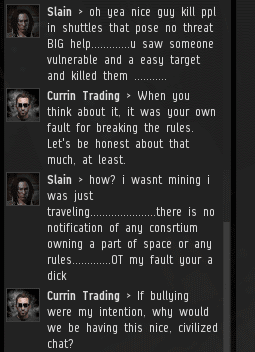 Slain grew paranoid. He saw enemies everywhere--even the people who ganked him were suspect. 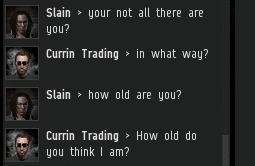 Pop quiz, hotshot: How old does Slain think I am? Anyone? 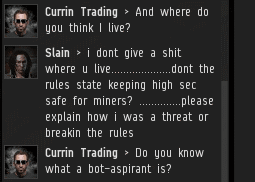 Admittedly, I got greedy and tried to fish for another Miner Bingo quote. Slain denied being a miner. True, he wasn't mining at the time I killed him. But trust me, if kill enough highsec miners, you can smell it on 'em. 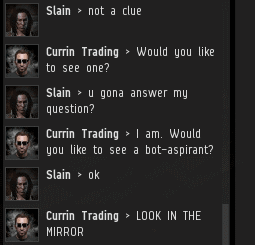 Some might say that I was unfair to Slain. He'd been playing EVE since 2003. I only encountered him when he was autopiloting a shuttle. How could I know for sure he was a bot-aspirant? Instinct. That isn't good enough for some people, so I looked him up on Eve-Kill.net to find out if he'd lost any other ships recently. It turns out that he'd lost a Thrasher in lowsec the day before I popped his shuttle. Perhaps I erred by judging a book by its cover?

Think again. Slain had been making use of his 100+ million skillpoints by flying one of the worst fits I've ever seen. 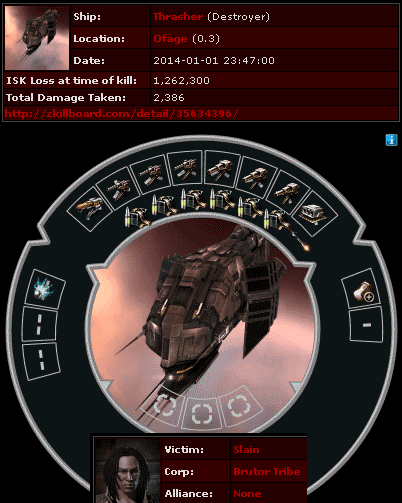 Behold the fit of your nightmares. Yes, that is a mining laser you see on there. That's what a decade of bot-aspirancy will do to a guy.

Support your local New Order Agent. You could save a life.
Posted by MinerBumping at 18:59