Setting a Course for Compliance

Some people say that the New Order opposes highsec mining. Some even petition us for "promoting bigotry" against the miners. Actually, we're strongly in favor of legal mining. What we're against is bot-aspirancy. And that takes on many forms, not just illegal mining in highsec. 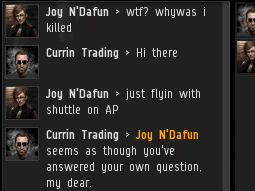 Joy N'Dafun convo'ed my alt, Currin Trading, after I popped her shuttle and podded her. I barely got a "hello" out before she volunteered a full confession of her crimes. Torture, for intel-gathering or law enforcement, is unnecessary in highsec. The carebears tell us everything--all we have to do is show up. 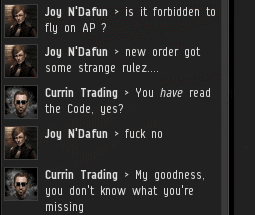 Joy didn't deny having knowledge of the New Order and its Code. She did deny having read it. I've seen this song and dance before, so I humored her. 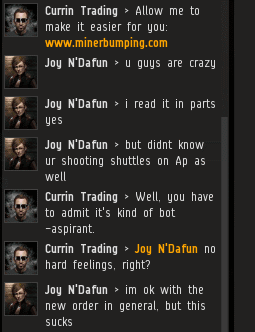 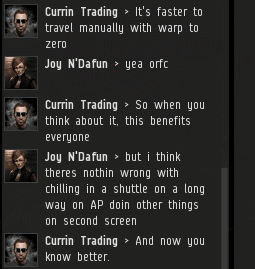 Like a lot of people, Joy didn't have a problem with the rules--except for the one that outlawed her peccadillo of choice. As I often say, the Code is not a buffet. You don't pick and choose which rules you want to follow. You gotta take the whole thing. Joy left the convo. It was like one of those scenes in a movie where someone walks away from a negotiation, but then, after a high-tension moment, comes back. 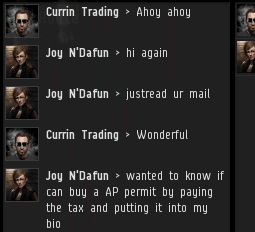 After reflecting on the Code and my "termination notice" EVEmail, Joy felt a growing desire to buying a permit. 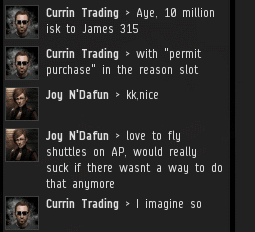 This is highsec in a nutshell. First the shock and outrage, then the absorption of the Code, then the turning over of a new leaf. This is why the New Order never gives up. We want to stick around for the good part. 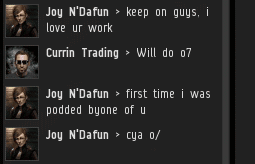 Joy and I parted on good terms. She understood her obligations, and I was willing to forgive her for her past failure to live up to said obligations. It was a give-and-take, a far cry from the "tyranny" that our critics accuse us of. 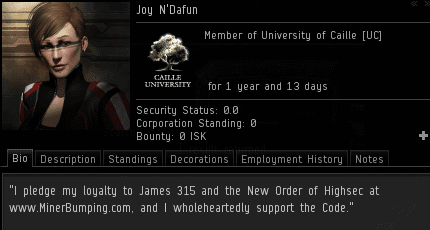 Joy purchased a permit and made a public declaration of loyalty to the proper authorities in highsec. If I hadn't been around to kill her, this wonderful transformation might never have taken place. 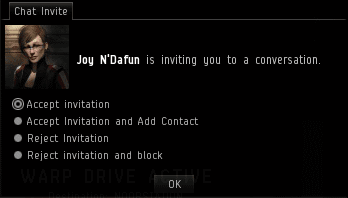 The story had a happy ending. Of course, EVE is not a fairy tale or even a movie. It's real life. As such, it's a much more complicated. Not everything gets wrapped up so neatly. 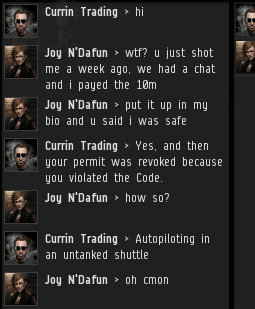 Despite the progress that had been made, Joy's compliance quotient had suffered a relapse. She'd exhibited symptoms of her old bot-aspirancy in my presence, and I had to kill her again. 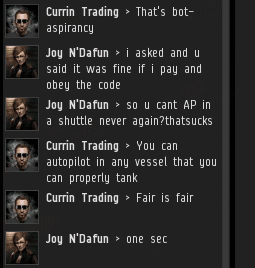 I'm willing to concede that autopiloting is a game mechanic that does not violate the EULA. However, autopiloting in an untanked vessel is an act that carries the presumption that highsec is totally safe. Classic bot-aspirancy--and totally against the Code.

I was disappointed by Joy's betrayal, but wasn't too surprised by it. In our original conversation, I noticed she seemed to be preoccupied with her own needs--what she could get out of the deal. Although everyone benefits from the Code, it's not there to promote selfishness. The Code is about giving and sharing to promote the interests of the community as a whole. Ask not what highsec can do for you, but what you can do for highsec. It's a motto our Agents live by and fight for every single day.
Posted by MinerBumping at 19:50