Both Sides of the Keyboard

Killing hundreds of freighters isn't easy; Agent loyalanon just makes it look easy. For an Agent to lead huge ganking fleets effectively, he must occasionally spend some quiet time ganking miners solo. This enables him to keep in touch with the common carebear, renewing his strength and preparing him for future ganking fleets. 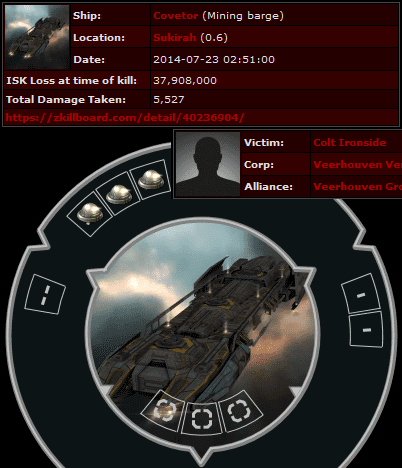 loyalanon spotted an illegal Covetor piloted by Colt Ironside, a member of the Veerhouven Group Alliance. From the Covetor's fitting and Colt's AFK demeanor, it was clear that Colt had no genuine interest in EVE. Since Colt wasn't playing EVE, loyalanon decided to remove him from the asteroid belt and make room for others. 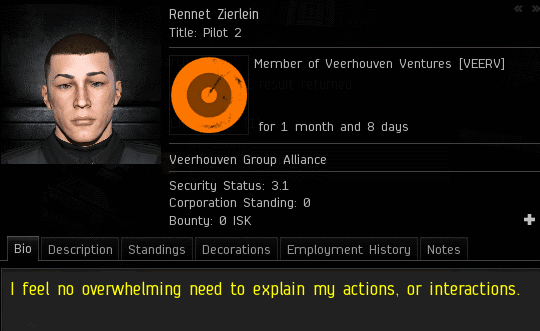 It was then that another member of the Veehouven Group Alliance spoke up. He was Rennet Zierlein, a highsec miner like the rest of the alliance's members. He wasted no time in revealing what kind of carebear he truly was:

Yes, Rennet was one of those carebears, the kind who believes (1) it's sociopathic to shoot spaceships in a spaceship-shooting game, and (2) it's perfectly normal to encourage the real-life suicide of other players. As regular readers of MinerBumping know, Rennet's attitude is quite common in highsec among the anti-ganking crowd. To summarize their philosophy... 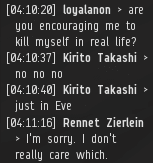 Kirito Takashi, a passerby who was drifting through the system, gave Rennet a lifeline. Rennet didn't see fit to take it. He wanted the gankers dead. In-game, out-of-game, whatever it took. 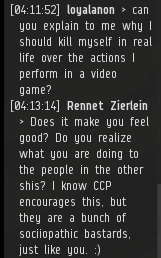 Note to CCP: No matter how many times you grant the carebears' wishes and nerf PvP in highsec, they will never be grateful. As long as there is anything less than 100% safety in highsec, they'll think you're sociopaths. Don't bother trying to please them.

Despite Rennet's distasteful behavior, I feel sympathy for him. He has been a highsec miner for five years. loyalanon, too, wanted only to help the misguided carebear. Rennet offered some puzzling ideas about people being sociopaths regardless of "which side of the keyboard you are on". Personally, I'm always on one side of the keyboard. How would I get on the other side of it? My desk and computer monitor are in the way. Besides, I would have to relearn how to type from the other side. 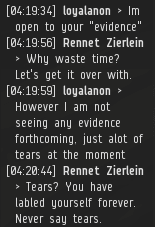 Rennet had no evidence to support his ideas, only more cryptic words for loyalanon to ponder. 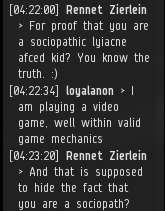 Paranoia was setting in. Sociopaths lurked behind every corner. Rennet freely admitted that it didn't matter that Agents of the New Order play video games using valid game mechanics. That's just the cover for our real agenda, which is presumably not related to video games.

Cornered, Rennet returned to the two-sided keyboard theory. Seriously, how are you supposed to get on the other side of your keyboard? I suppose you could rotate the keyboard 180 degrees and type upside-down, but I don't see what the point is. It's probably best not to take a highsec miner's ideas about keyboards too seriously. They're not experts on the subject. After all, they stay away from keyboards as much as they can.

Meet me in 9F-7PZ in two days. Ying will be the one actually there. Rules:

Rookie ships fitted any way you want, but only one high slot full. I would suggest some kind of weapon.
No drones.
No friends.

The killboards will tell the story. :) Have a nice life, or not.

Shortly after loyalanon wrapped up his chat with Rennt, another member of Veerhouven Group Alliance sent him an EVEmail and challenged him to a rookie ship duel. loyalanon enquired as to whether members of the alliance were still mad at him for ganking the Covetor.

Fuckwads like you upset a lot more people that you know. So what's it going to be? Neither Ying, nor I have any friends up there. You could save me a lot of time and trouble if you would tell me now that you don't have the balls for it.

The member of Veerhouven confirmed that the alliance was still mad. This might not have been the best time for loyalanon to teach them about the Code, but we in the New Order have a philosophy of our own: Never miss an opportunity. If you wait for the perfect time, it might never arrive.

Answer the fucking question. Chances are that neither one of you will get out of there alive, but Ying is willing to go. Are you? Why kill you in Hi sec when it doesn't cost me sec status if I do it in Null?

The Veerhouven crew concluded their interaction with the New Order that day by encouraging loyalanon to "think about something for once in your life". Indeed, the Veerhouvens have given us all much to consider: Wardec, awox, ganking, bumping...?
Posted by MinerBumping at 19:01