Among the New Order's many strengths: Diversity and diplomacy. And no single Agent better personifies both of these strengths than our own Capt Starfox. 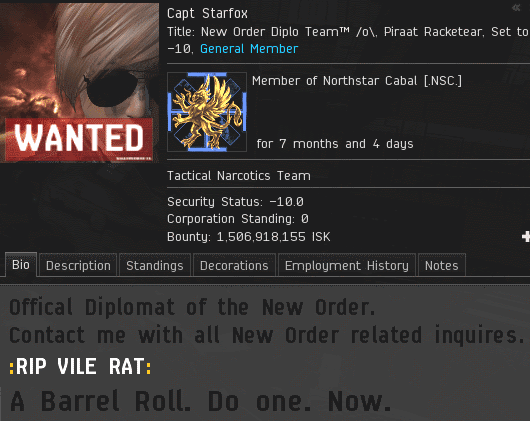 Starfox is not a member of CODE., but of Tactical Narcotics Team, a nullsec-holding member of the CFC. Starfox is also the New Order's lead diplomat. Skeptics and critics might call this an example of the New Order putting a token non-CODE. member in a highly-visible position of authority. Nonsense. The real reason Capt Starfox is in charge of the New Order diplomatic team: He came up with the idea and felt like doing it. As a result, Starfox gets EVEmails like these... 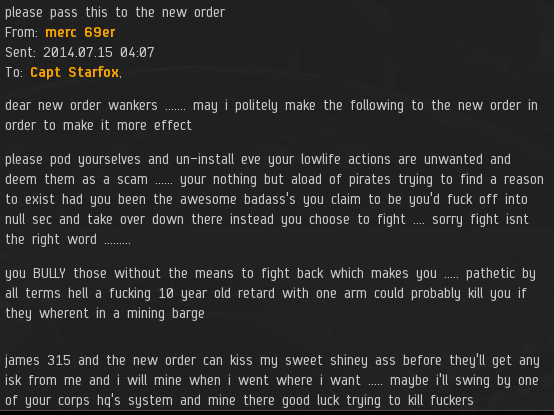 Somewhere along the way, merc 69er got the wrong impression about our Order and what we do. He accused us of being a bunch of bullies. Naturally, this charge was accompanied by a bunch of threats and profanity. Because that's how you fight bullying. 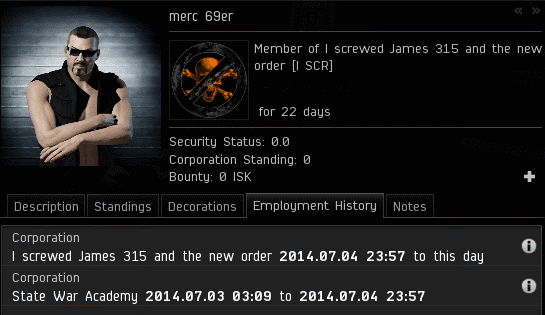 Cursory research on merc 69er revealed him to be a hardened enemy of the Code. Judging by his corp name, he had radical affiliations. 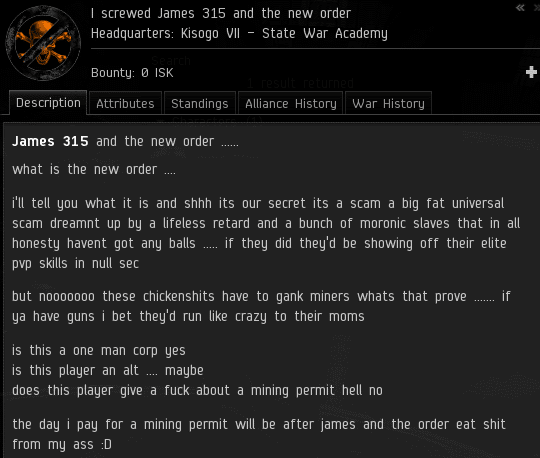 The corp in question, I screwed James 315 and the new order, was evaluated by New Order Intelligence. Initial assessment: The corp possessed the average level of sophistication for a rebel group.

Now it was time for Capt Starfox to flex his diplomatic muscles, drafting a reply that would help soothe and educate the carebear, readying him for his inevitable future transition from anti-Order to pro-Order status:

Starfox estimated the carebear's attention span would be exhausted after about a dozen words.

However, merc 69er had been doing more thinking about the Code than anyone could have suspected. He railed against the New Order's practice of checking for AFK'ers by talking to people in local. Maybe he was an active miner who didn't pay enough attention to local chat?

However, merc confessed to violating the New Order bathroom protocol--a clear admission of guilt. He also protested our "bullying" by saying we're scum that deserves to be treated like scum.

The whole bullying complaint is content-free; it's a zero-calorie argument. By contrast, a discussion about the Code is always fruitful. Since merc was interested in a debate, Starfox gave him one. The diplomat replied with a brilliant, concise explanation of how the Code applies to daily life in highsec:

It is required to dock up if you need to go AFK while mining; however, you are allowed to ask an Agent if it is alright to use the restroom and remain undocked. We allow this because we care.

Miners and the rest of the carebear community have already received enough warning. The ganks will continue with, or without "time to respond."

HTH -get a permit!

It was completely devastating. Impressively, the accomplished New Order diplomat dashed off the EVEmail in just a few minutes. If properly absorbed, it would undo the months or even years of rebel propaganda to which merc 69er's main must've been exposed. How could merc answer it with anything other than "You're right. Here's 10 million isk"? 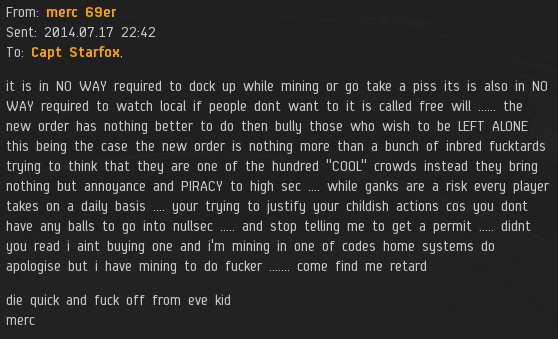 merc continued to resist. He made an appeal to "free will". Starfox politely told merc how silly he was being. Yes, there is free will in highsec. Freedom to follow the Code, freedom to enforce the Code... Freedom to disobey the Code? That's going too far, like yelling "fire" in a crowded theater. Every freedom has limits.

The stubbornness of the "I screwed James 315 and the new order" CEO was daunting. If Starfox's diplomatic mission was to succeed, he would need to draw upon the maximum power of the Code.