The Baddest Carebears on the Block, Part 1

The New Order is a civilizing force in highsec. Its Agents are known for being the most sophisticated, diplomatic individuals in EVE. The carebears, on the other hand, can be a bit rough around the edges. They sometimes mistake our courtesy for weakness.

Agents Mad Fatchick Killer and Braegnok were patrolling the Uminas system when they located a suspected bot-aspirant in a Noctis. After a careful investigation, they concluded the Noctis pilot did not have a permit, and that a gank was warranted. 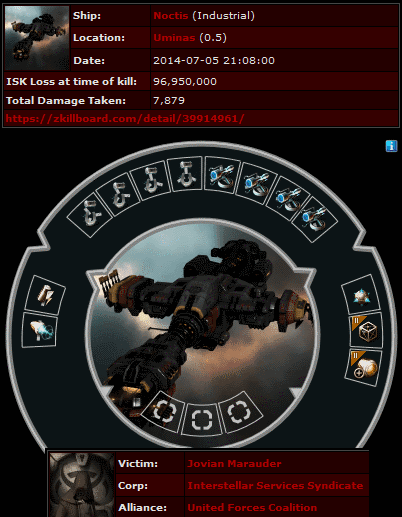 Our Agents carried out the death sentence with a pair of Catalysts. After reviewing the killmail, they saw that the Noctis, indeed, was not fit for highsec. It was completely untanked. The pilot, Jovian Marauder, joined a convo with Agent Braegnok and demanded an explanation.

With hardly any prompting, Jovian confessed that he'd harbored doubts about the New Order all along. No wonder he didn't own a permit.

Jovian didn't believe in mining permits. Whatever the New Order was really about, he doubted it would succeed.

Though Jovian had just lost his ship and admitted it might be futile to try tanking CODE gankers, he claimed not to be worried. He was a hardcore carebear, afraid of no one and nothing.

In recent days, the New Order has been the subject of even more conversation than usual in carebear circles. In particular, there's widespread bafflement about the New Order's practice of destroying even empty freighters. Such ganks can't be understood--apart from the Code.

Jovian made the mistake of arguing about the terms of the Code and the meaning of "bot-aspirancy" with a pair of highly-trained Agents. Carebears, don't do this. You'll come across as an amateur.

Now the gank recipient was blowing hot and cold. By turns he insulted our heroes and claimed to support them.

Then the gauntlet was thrown down. Jovian considered himself one bad carebear. He had no respect whatsoever for our Agents' PvP abilities. 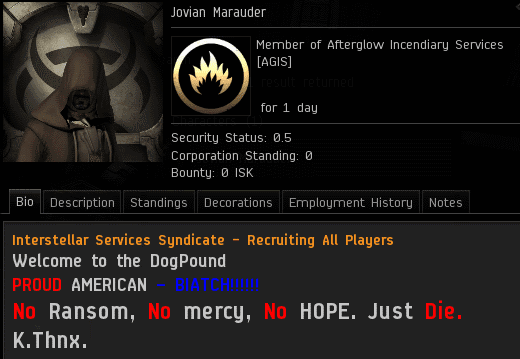 His bio was full of bluff and bluster. Thus far, Jovian had done nothing in his EVE career to justify such boldness. He was a Noctis pilot, a carebear, and a gank victim. But he'd swallowed the anti-Order propaganda about our Agents not being able to fight anything that can shoot back.

As I've said before, the New Order never backs down from a challenge. War was declared on the spot. Would Jovian learn his lesson, or would he prove himself the baddest carebear in highsec?

To be continued...
Posted by MinerBumping at 17:53