Who's looking out for the EVE community these days? In theory, CCP polices the game. In reality, CCP and its small army of GMs can only scratch the surface. The New Order believes, strongly, that highsec can and must experience an alternative to the carnage and chaos of the "everyone does whatever they want" philosophy. Our Agents boldly go where CCP dares not tread. 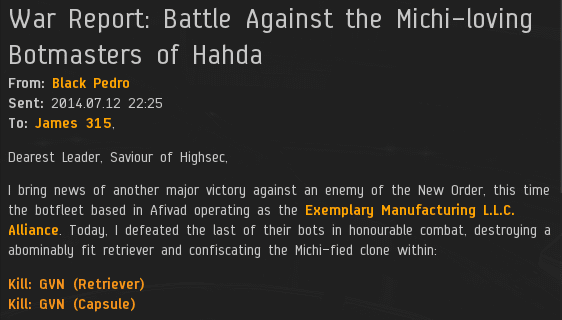 Case in point: The war on bots. Every man, woman, and child in highsec knows that CCP has only banned a fraction of the bots who daily mine our ice and ore. Players report bots all the time, only to find the machines continuing to feed upon highsec's wealth, hour after hour after hour. CCP considers these reports irrelevant. We don't. 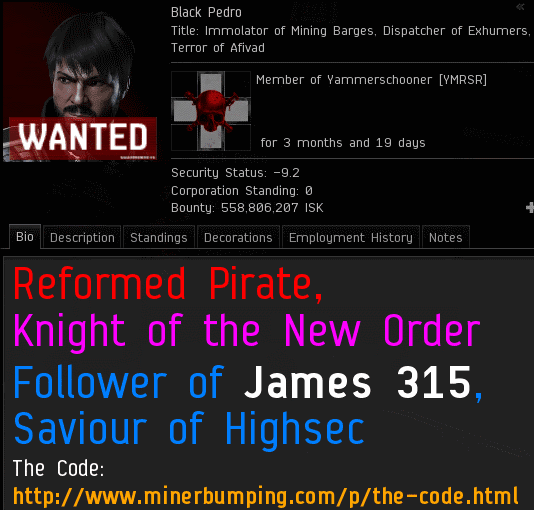 Agent Black Pedro is one of the growing number of anti-bot and anti-bot-aspirant gankers who have rallied to the banner of the Code. 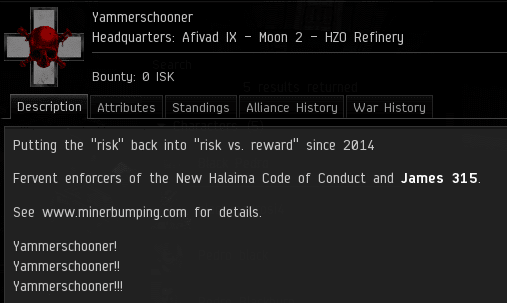 Observers have called it the "Highsec Awakening". Before, empire space was home to a divided, fractured assortment of content creators. Now we are unified. And in that unity we have achieved more power than anyone in the pre-Code era could have dreamed.

Earlier this month, Black Pedro ganked a Retriever pilot named GVN in the Hahda system and found a billion isk Michi implant in his pod. A nice pod, but nothing more significant than that, right? Not until you start reviewing Pedro's past kills. Lillian Marcadie, also ganked in Hahda, was a Michi-user.

The more he dug, the more Michis Pedro found in the system.

It was no coincidence. It was evidence of a massive botting operation.

Pedro and his corp didn't give up. It was time to fight. 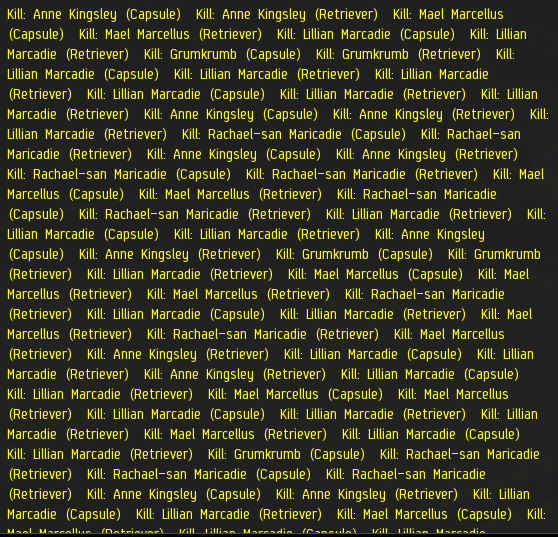 Bot-actuals are different from bot-aspirants. The carebears--those who have not yet activated the illegal macros they covet--are known for being cowardly and whiny. The bots don't normally cry, or say anything for that matter. They are known for their persistence. However, the New Order doesn't give up, either.

CCP can't save us from the bots. Only the New Order can. We have destroyed countless macro miners. As great an accomplishment as this is, we know that the ganking of bots only treats the symptom of a greater problem. We're determined to eliminate the causes: The risk/reward imbalance of highsec, the idea that EVE is a game about accumulating isk, the elimination of emergent gameplay. In short, bot-aspirancy.

Every carebear carries within him the potential for future macro usage. Once they have experienced what EVE is really about, they will see that EVE is not meant to be automated or "played" AFK. Then, at last, they will stop begging CCP to make highsec a botter's paradise.
Posted by MinerBumping at 19:00