At this point, I'm not sure what to say to the carebears who still insist on violating the Code. Perhaps the simplest message is best: "Pay attention." Here are some carebears whose attention wandered while they were supposed to be focused on EVE and the Code, during the week of July 13th @ 00:00 EVEtime through July 19th @ 23:59 EVEtime. 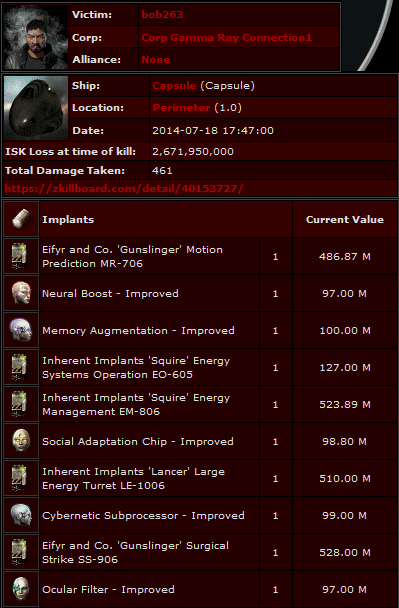 bob263 got zapped by Agent Brutal Anna. He might've assumed he was completely safe in a 1.0 security system. "1.0" doesn't stand for "100% safe", though. Over two and a half billion isk worth of implants were lost in the confusion. 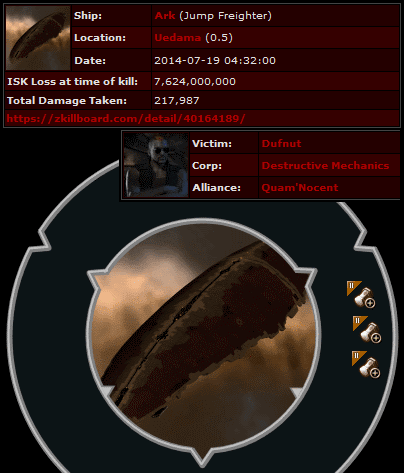 Among the cargo were blueprints for various items. If only Dufnut were more Catalyst and less Ark. They don't make Arks as sturdy as they did in the old days, it seems. Another Ark was killed this week. Our Knights made themselves at home in Uedama this week. If there was any anti-Order resistance, it collapsed entirely. At least 41 freighters and 2 jump freighters were incinerated by the New Order. I considered tallying up the isk damage from all those kills, but you MinerBumping readers are smart people. You know how much that is: A lot. Gripptastic tried tanking up, but he lost 9.4 billion isk anyway. No permit.

How do we manage to kill so many freighters in such a short time? As illustrated by the involved parties on this freighter kill, the New Order has widespread appeal. From the poorest gank alt who relies entirely on reimbursements to the richest scions of nullsec, everyone does their part to enforce the Code. Slutch lost a freighter with some questionable fittings. Did she learn her lesson? 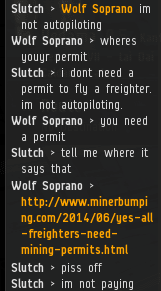 ...She did not. We've seen some stubborn carebears, but Slutch takes the cake. Less than an hour later, she was back in Uedama with another freighter. She said she wasn't autopiloting, which is great. However, she wouldn't even spare 10 million isk for a permit. Slutch sealed her own fate. She didn't even bother to fit some tank modules. Bot-aspirants get so stuck in their routines--or subroutines, as we like to say. If you lose two freighters in one hour, might I suggest updating your program with a few extra lines of... Code?