Previously, on MinerBumping... Rebel carebear merc 69er contacted New Order diplomat Capt Starfox and unburdened himself in a series of angry EVEmails. Starfox was determined to teach the unruly bot-aspirant the truth about the Code, no matter what it took. 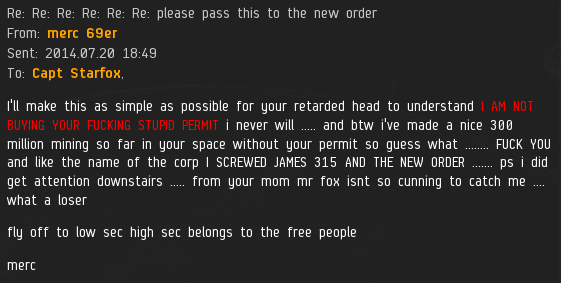 A lot of EVE players don't know that you can change the color of your text in an EVEmail. Or maybe they do know about it, but never find an occasion where it's appropriate to do so. merc 69er did. When he broke out the red text, Starfox knew he'd struck a nerve. 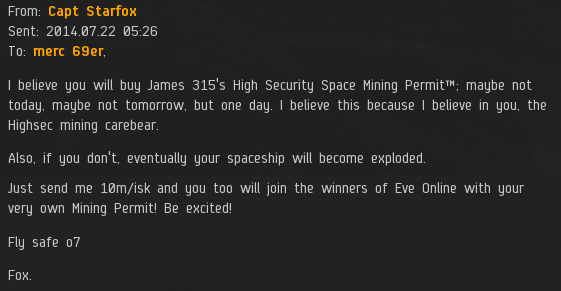 Experienced Agents know that a carebear's promises aren't the best indication of his future actions. I have personally sold many mining permits to miners who insisted they would "never" pay. Starfox kept the faith. He knew merc 69er would be much happier after he finally took the plunge.

The rascal made a counter-offer: He would buy a permit, but only after Starfox sent him 500 million isk. "Never" took one step closer to the present. Now all Starfox needed to do was negotiate that 500 million down to zero. 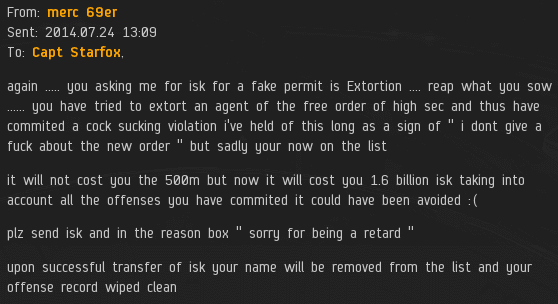 Again, merc refused. In his EVEmail, he attempted to borrow from the battle-tested Code lexicon, but he ended up dropping Miner Bingo quotes in spite of himself.

Next, the rebel claimed the entire New Order licensing apparatus was fraudulent. But the accusation held no weight because merc was unreliable. Not only did he quote the wrong "Star Trek" character, he quoted the wrong show.

And yes, mining permits are real. 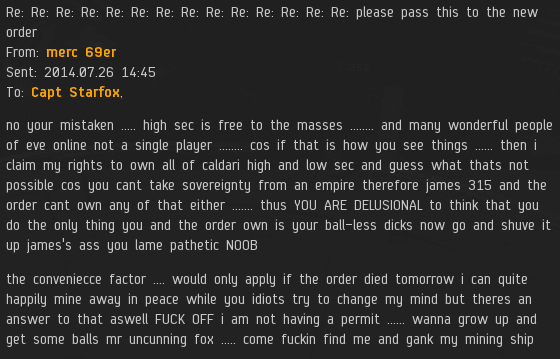 The more Starfox tried to pull him out of the muck, the deeper the carebear descended into madness. He declared himself ruler of parts of highsec and lowsec. An utterly absurd notion. But Starfox was ready for him. 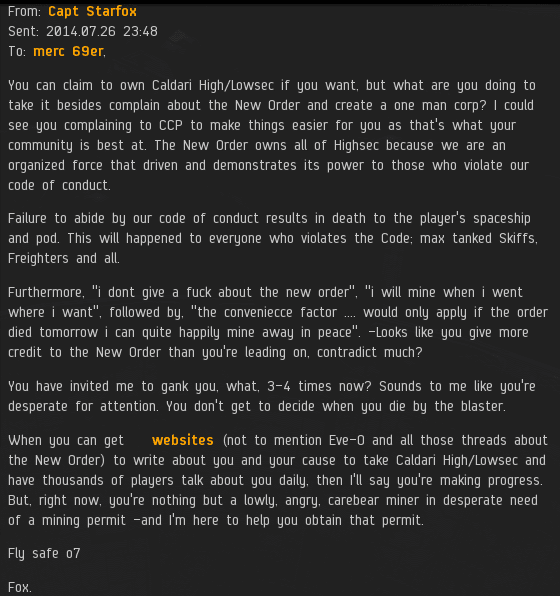 In a tour de force, the New Order diplomat wrapped his arms around the drowning carebear and pulled him to safety. merc 69er had a second chance at EVE, if he would only take it. 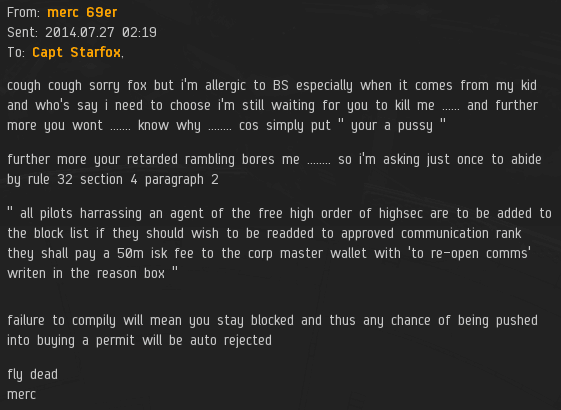 merc 69er terminated their correspondence by putting Starfox on his "block" list. This was an extraordinary turn of events, since it was merc who had contacted Starfox to begin with. Clearly, Starfox's flawless logic and unwavering faith in the Code shook the rebel miner into something approaching wakefulness--and he didn't like the feeling. That's life. Not everything that's good for us in the long run is pleasurable in the short run. merc still didn't have a permit, after all, and everyone knows you can't really enjoy EVE as a miner before you get licensed. 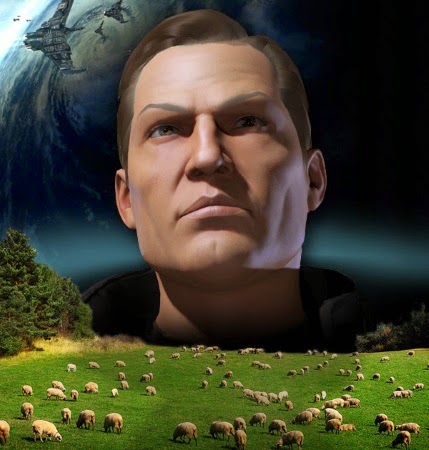 You know, the process of saving highsec isn't like what you see on a television show. In real life, not every problem is resolved within the span of 30 or 60 minutes. The final chapter in merc 69er's long path to reconciliation with the Code has yet to be written. Some carebears are smart, while others are stubborn. From the fattest jump freighter to the lowliest Venture, they are all the children of highsec. Given enough time, each one will purchase his or her very own mining permit. They're just waiting for an Agent of the New Order to help them write the next chapter in their journey. (Credit Iam Thanatos for the portrait.)
Posted by MinerBumping at 18:01