That Speech of Yours

Yesterday we were privileged to enjoy Agent Sophaya Fortelleren's "Book of 315". Our Agents are philosophers and poets. However, they prove their commitment to highsec not only with words, but with actions. Sophaya practices what she preaches.

Sophaya came across a miner named Lokar Fonulique and an Orca pilot named Cosmino. Neither had permits. After Lokar was ganked, the two carebears were instructed to purchase mining permits as soon as possible.


Cosmino > there's your 10m a year permit, bitch
Sophaya Fortelleren > The permit would have cost you less!
Cosmino > I'm making a point here.
Cosmino > That I don't care about your petty 10 million
Cosmino > and would rather be defiant
Sophaya Fortelleren > If only your kind could see the folly of your ways, tis not about the isk, not the amount, nor the buying power of it, tis simply a gesture of obedience and respect unto the code
Sophaya Fortelleren > and the order
Lokar Fonulique > Enter the bible thumping

Cosmino freely admitted his desire to be defiant, so Sophaya laid down some serious Code.


Sophaya Fortelleren > https://i.imgur.com/PjUAmtl.jpg
Cosmino > Do you really get off on this or something?
Cosmino > I understand ganking, so this doesn't anger me
Cosmino > but what is with this weird schizophrenic bullshit?
Lokar Fonulique > Self entitlement over the internet
Sophaya Fortelleren > On the contrary, I gain no pleasure from it, I do this to make this cosmos a better place, where the pvper may not fear the aspirant miner wrecking the economy, and holding his livelyhood with an iron fist
Cosmino > what the hell does that even mean?

Cosmino was baffled by New Order ideology. As much as he disliked random suicide ganking, he could at least understand it. He couldn't make sense of this business about the Code.


Lokar Fonulique > Has no life outside this game
Cosmino > bitch who do you think made the ship you fly around and kill miners in?
Cosmino > you dumbass
Cosmino > without miners, you wouldn't exist
Cosmino > so go sit and spin on that one
Sophaya Fortelleren > Until the miners started to raid the cosmos of minerals?
Sophaya Fortelleren > The ships replenished themselves, their nature was pure and self sustaining
Cosmino > ooooh my god lol
Sophaya Fortelleren > Also please do not use such aggressive language, you're making me nervous, and I don't appreciate it

Carebears thrive on mindless routine. When placed in an uncomfortable or unfamiliar situation, carebears rely on their instincts. That's when Miner Bingo quotes come out.


Cosmino > i'm going to leave this alone
Cosmino > as i suggest you do to me and my friend
Cosmino > otherwise you'll see some real fucking judgement shit go down
Cosmino > not this fake EVE biblethumping shit either
Cosmino > i have jump bridges all over your god's universe
Cosmino > and i will find you
Sophaya Fortelleren > You and your friend, (if the miner can truly form such relations) will not be at peace or in peace until you obey the code and with it the purchase of a permit.
Cosmino > bitch i'm about to martin luther your ass

Unable to win the battle of ideas, Cosmino started making empty threats. There was no risk of the carebear retaliating, of course. Still, Sophaya felt bad for him.

Including himself, Cosmino had an army of 17 people. Sophaya Fortelleren was marked for death. What would happen next? The answer may surprise you. Cosmino sent Sophaya this EVEmail: 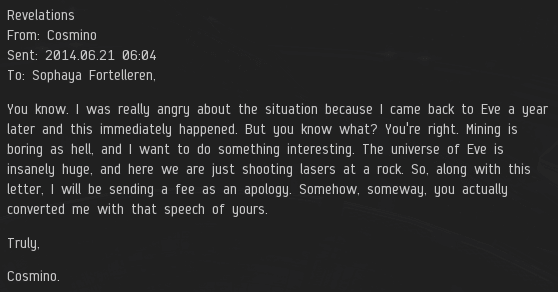 It was a highsec miracle! Sophaya's "speech" hadn't fallen on deaf ears after all. He sent 10 million isk for a permit and presumably called off his 16 assassins.

Another tremendous victory for the New Order--and a powerful demonstration of the Code. Day by day, the seeds of progress are taking root in the unlikeliest of places.

The second anniversary of the Code has inspired many to think profound thoughts about the Code and what it means to the good people of highsec. Agent Thirtyone Organism--like Sophaya, a warrior poet--wrote the following meditation on the Code:

"People live in a daydream state. Highsec lives in a daydream state. What we do is interrupt their daydream. We show them, in the midst of their slumber, that they are living a life of fantasy. The fantasy that because CONCORD is in Highsec, therefor Highsec is safe. That fantasy is driven by the erroneous thinking that the CONCORDing of an entire fleet, no matter how large they bring against you, is enough of a deterrent to keep everyone within a very comfortable and predictable range of behavior.

"You live the Code, or you die at the hands of the CODE. It’s that simple. Never forget that. The CODE exists to remind Highsec that they live in a daydream. Agents are all throughout New Eden. Maybe not in the same system, or the next system over, but Agents of the Code are among you. Given a long enough period of time, your violations will be found. You can count on that. And when the CODE warps in on you it’s because you personally were selected – out of a pool of a dozen candidates - to die for violating the Code. And to give you that little extra ‘oomph’ to make sure you’ve woken up: we go for your pod. Agents don’t care if they lose their ships or security status because it’s done in service of a worthy cause. That doesn’t sound like a very safe Highsec to you, does it?

"If you are in Highsec, you are in CODE territory. Its Agents have a few simple rules that you need to follow to make sure that you don’t slip back into that state that first caused you waste away for nothing, and second caused you to unnecessarily lose a ship.

"The Code is the bible of The New Order. Its Agents are its priests – and we proselytize by fire. New Agents are being created every day. If you can’t be an Agent, you can support the Code in other ways by buying a mining license and by not forgetting that if you want a safe New Eden then never leave station and that's the way CCP wants the game to be played."
Posted by MinerBumping at 17:54