Uh oh, it's that time again--another edition of the Highsec Miner Grab Bag! And yes, I am immensely pleased with the progress we've made so far in highsec. Thanks for asking. 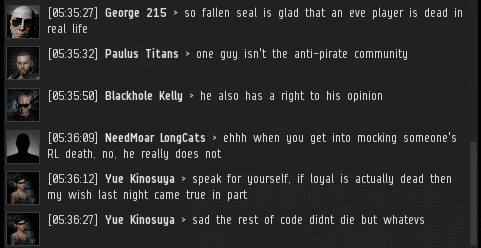 Good communication remains one of the keys to the New Order's success. It's more difficult than you might think, though. Since when did we claim ownership of "mine fields"? If they're referring to asteroid belts and ice anomalies, i.e. places where people mine, we prefer to call those "ganking fields".

Two minutes later, the same angry miner claimed he "would have gladly paid" if asked. I've met a lot of people who did pay, and none of them were like this guy. Miners who pay us are the cream of the crop.

Gray Adoulin is one of the most dangerous highsec miners we've yet encountered. He spent five years studying "marketing", so he knows how to crash the entire economy of EVE and prevent everyone from making isk. You'd never think such power was possessed by a Venture pilot.

Another economics expert, Agemnia Auhman, believes the New Order's "multi nomial distribution" is flawed, and that our existence can therefore no longer be justified. This was a novel argument. Less than a minute later, Agemnia reverted back to normal rebel behavior.

Meanwhile, Relckar didn't rely on any sort of economic analysis to justify his opposition to the New Order. His motive was more personal.

The miners claim we "ruin" part of their lives by forcing them to mine their stuff back. Nothing could be further from the truth. We liberate the carebears from mining, and we even offer training in other careers.

Mike Haamilton threatened to take back 41 million isk from our Agents, in flesh if need be. If he's referring to in-game flesh, maybe that wouldn't violate the EULA. But if, in retrieving the 41 million isk in flesh, he sheds one drop of New Order blood, or if he takes a single 0.01 isk more or less, his name shall be placed upon the Red Pen list. 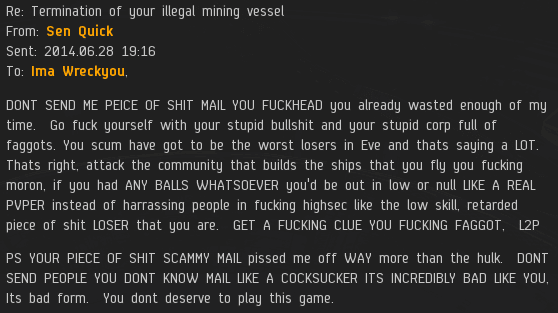 In the comics, when Dr. Bruce Banner gets angry, he becomes the Hulk. In EVE, a Hulk gets angry when he becomes a Capsule. 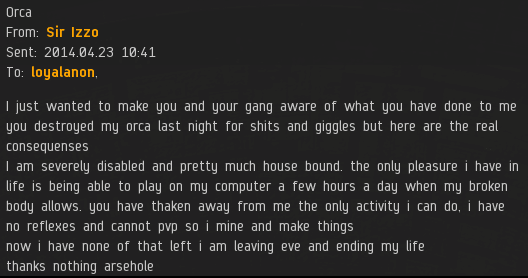 After Sir Izzo lost his Orca, he said he would quit EVE and commit suicide. Luckily, since then, he has changed corps a few times, so we can confirm that he's alive and well and playing EVE. Nevertheless, it's a EULA violation to make comments about suicide like Sir Izzo's, or to make death threats like other miners have. So how should a miner lash out in an EVEmail, if he must? See below:

Defiant? Wrong-headed? A violation of the Code? Yes. But still an improvement.
Posted by MinerBumping at 21:10