The Baddest Carebears on the Block, Part 2

Previously, on MinerBumping... Agents of the New Order destroyed a Noctis owned by carebear Jovian Marauder. Though a carebear, Jovian's name and bio suggested he was a highsec tough guy. He questioned the New Order's PvP abilities.

Jovian's dismissive attitude got him in hot water. The alt of one of the gankers was Mogdud Saturos of Vulgar Displays of Power. A wardec was immediately issued against Jovian's corp. 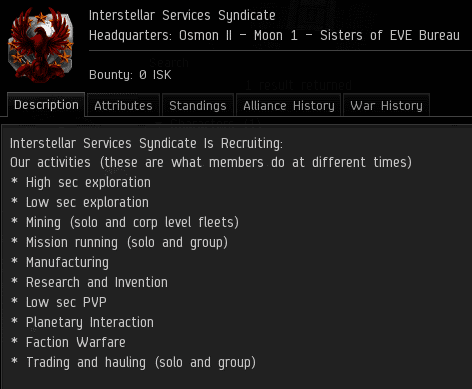 Jovian's corp was called Interstellar Services Syndicate. It would be hard to find a more bland, generic, vanilla corp name. The corp description was just like thousands of others in highsec: The carebears claimed to do pretty much everything, and they were recruiting. Obviously, this corp needed a good wardec to straighten things out. However, ISS was a member of an alliance. Since allied corps can only be wardecced at the alliance level, Jovian Marauder had gotten the entire alliance in trouble with the New Order. 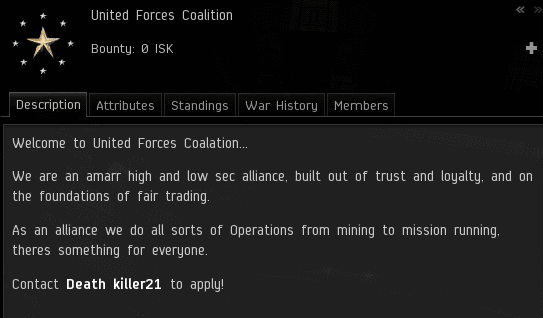 Apparently it wasn't that hard to find a blander name than "Interstellar Services Syndicate", for the alliance was called United Forces Coalition. It, too, claimed to do everything--though somehow I get the feeling "everything" mostly consisted of highsec mining. Perhaps Jovian got mouthy because he was sheltered within a 70-member alliance. The alliance leader was named Death Killer21. Surely he was a warrior who would show the New Order what real PvP is all about.

Within minutes of being notified of the wardec, Death Killer21 contacted Mogdud. Our heroes made no secret of the reason behind the wardec. Now that everyone was on the same page, surely Death Killer21 would prepare his troops for war.

For a guy named "Death Killer21", the alliance leader was surprisingly polite. But although he didn't condone trash-talk from his members, surely he would now rally his alliance for some good fights.

In fact, Death Killer21 wasn't interested in death or killing. He wanted peace, because his alliance wasn't suited for war.

Death Killer21 was willing to surrender before the first shot was fired, and to pay 150 million isk for peace. Even though Jovian Marauder's corp was useless, the alliance couldn't part with them. Death Killer21 only wanted to have as many members in his alliance was possible, regardless of what those members actually did. I suspect he's not the only highsec alliance leader who feels that way.

Agent Mogdud made another proposal. He was willing to accept Death Killer21's surrender if they paid half a billion isk. Not a bad payday for a wardec that hadn't gone active yet.

Death Killer21 agreed, as long as Mogdud didn't tell anyone. He needed to keep his fearsome reputation intact.

Mogdud wasn't willing to explicitly agree not to tell anyone about it. The New Order is known for its transparency, after all. Death Killer21 then devised a way to launder the 500 million isk payment. He wanted the deal to be under the table, so even his own alliance members wouldn't know about it. Once again, MinerBumping brings you, the EVE public, the truth about what really goes on in highsec!

The 500 million isk was transferred, and the New Order won yet another extraordinary victory, all without firing a shot. In the wake of this debacle, Interstellar Services Syndicate collapsed, and Jovian Marauder sought employment elsewhere. The alliance, United Forces Coalition, also collapsed, losing 90% of its members. Death Killer21 abandoned his dreams of leading a highsec alliance and went elsewhere. The downfall occurred so suddenly that Jovian still has a link to ISS in his bio, and the UFC description still lists Death Killer21 as its main contact. When justice is done, sometimes it happens swiftly, as in this case. The stars in highsec shine a little brighter today.
Posted by MinerBumping at 18:02