The Time the Mercenaries Were Real, Part 2

Previously, on MinerBumping... Agent Thirtyone Organism popped a Capsule that was sitting AFK on a stargate. The pod was empty--not a single implant--but that didn't stop the owner, SOIH-257, from having a meltdown and vowing to hire mercenaries. 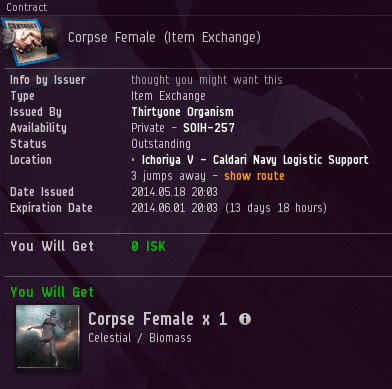 SOIH-257 was particularly annoyed when Thirtyone offered to return the corpse. In the land of the carebear, no good deed goes unpunished. But would SOIH-257 really make good on her threat to hire mercs and exact revenge? 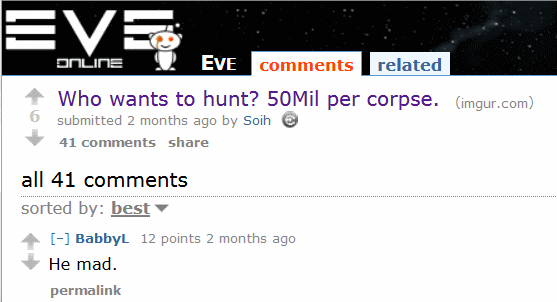 Incredibly, SOIH-257 was serious about the merc thing. She went to r/EVE on Reddit.com and posted her offer publicly. She identified the target by attaching the image of Thirtyone's friendly corpse contract. SOIH-257 offered 50 million isk for anyone who could grab Thirtyone Organism's corpse. On the surface, Reddit is a nest of highsec carebears; a "downvote brigade" attempts to bury every post related to the New Order. Despite this, r/EVE is a diverse community. They quickly realized SOIH-257 was mad.

Among the Redditors who saw SOIH-257's appeal: A pirate referred to here as NECROMANCER. (The chat logs were apparently edited to conceal NECROMANCER's identity.)

The carebear and the pirate spoke brusquely to one another. SOIH-257's fantasies about "being Jabba the Hutt" were coming true.

NECROMANCER seemed to be familiar with the New Order Agent already. SOIH-257 giggled with delight. Then NECROMANCER asked SOIH-257 about the circumstances of the pod gank that had led to her vendetta.

As usual, the Code violator had an excuse for being AFK: She needed to help a child. Not just any child, but a disabled child. Isn't it interesting how--according to the carebears, at least--no one ever goes AFK for selfish reasons? It's always helping disabled children, or repairing the neighbor's plumbing, or feeding an infant, or something along those lines. Highsec carebears are the nicest, most generous people in the world, but only when they're AFK.

The mercenary gave SOIH-257 some guff about the situation, but they quickly returned to talking terms.

Coincidentally, SOIH-257 claimed to have hired thirty-one pilots to hunt Thirtyone Organism. "So far." NECROMANCER gave her some much-needed advice.

Spoiler alert. SOIH-257 downgraded herself from Jabba the Hutt to "Red Mist".

Finally, NECROMANCER started speaking SOIH-257's language. He promised endless punishment to be inflicted against the New Order Agent as soon as he received payment.

The price: Four PLEXes. It was steep, but SOIH-257 was still upset about losing the empty pod.

After the payment was sent, NECROMANCER name-dropped Nonnak Severin. This was probably not a good sign. 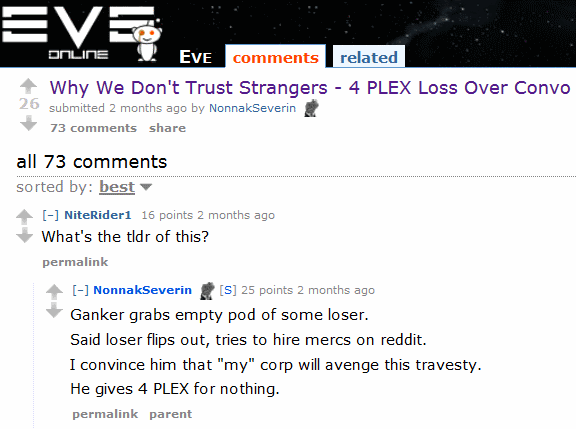 Nonnak reported to Reddit and revealed what anyone might have guessed: The mercenary had no intention of attacking the New Order. It was a scam. Nonnak posted the full log of his convo with SOIH-257 for Reddit's enjoyment. Agent Thirtyone Organism was informed of this, so he sent a polite EVEmail to SOIH-257 requesting an update on her promised revenge. SOIH-257 replied as follows:

Paid a few corps, got scammed up.

I only went to the public for this, so far, and nobody is going to come back with results, so you'll be fine for now. On the other hand, I still have several private militas ready to what I want.

So far just about everyone that I paid publically is going to run with the plexes and I quite frankly don't give a shit. In fact, they might pay you because I made them laugh. I even paid an easily spottable scammer's corp 4 plex for 4 weeks of wardec on you to see if you shit yourself, they ran with it to my knowledge, but still. I said I'd pay the plex and I have been since you logged out.

Tomorrow, if nobody has results, I'm going to turn to my actual friends and allies and they'll be doing the work nonprofit.

SOIH-257 freely admitted that every single corp and individual she hired had scammed her. Some of them were actually mercenaries, but none had the slightest interest in trying to hunt down a New Order ganker alt. They were only interested in her money, which they got. SOIH-257 concluded with a promise to hire her "actual friends and allies" next. I'm not sure why SOIH-257 didn't contact her friends to begin with, rather than a bunch of mercs she didn't know, but I guess that's not what Red Mist would've done. In the months that followed, nothing happened. SOIH-257's friends and allies, if she had any, failed to appear.

It's a hard lesson for some Code-violators to learn. There are no mercenaries or pirates coming to save you. No one is coming from nullsec to stop the New Order. There won't be any carebear uprising against us. Your "actual friends and allies" are not going to show up. There is only one thing you can count on in highsec: The Code always wins. It's time for the rebels out there to learn how to live with it.
Posted by MinerBumping at 19:53