CODEdot's new Glorious Revolutionary Armed Forces of Highsec corp has been busy sharing the wardec experience with highsec miners. Some say the wardec mechanic offers an unfair advantage to the attacker, because they get to choose the target. However, CCP succumbed to the pleadings of carebears, and the mechanic was changed. Now the recipient of a wardec can call in allies. Consequently, the attacker no longer exercises full control over who's involved in a wardec. Imbued with their new ability to call in allies, most carebears chose instead to continue their whines about wardecs. They can't be bothered to call in allies, as that would require them to return to their keyboards for a while and play EVE. 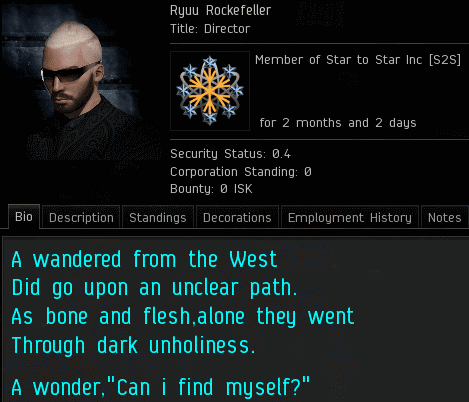 Nevertheless, some wardec recipients do look for support during wartime. Ryuu Rockefeller's corporation, Star to Star Inc, was beaten bloody by a CODEdot wardec. When the war was renewed, Ryuu went looking for help. In all the wrong places.

Specifically, Ryuu went looking for help in "Anti-Ganking", the most toxic channel in EVE.


Ryuu Rockefeller > so this is a real Anti-code movement..GG
Aidan Hawking > I don't get it though, why do I have to remove it? Like I said, I didn't actually pay for it
Agent Tom > remoe it ore u get kicked from channel
Hiw Gyfgwa > gives the wrong ipression
Suriv Virus > yep
Aidan Hawking > But I'm effectively stealin' from em' ain't that the point?
Hiw Gyfgwa > appearance is the point

Ryuu could barely get a word in edgewise, as the residents of Anti-Ganking were busy accusing each other of being New Order spies.

At last, during a lull in the conversation, Ryuu was able to make his request for help. He offered the hope of victory, claiming that his corp "did most kills in the last 10 wars". 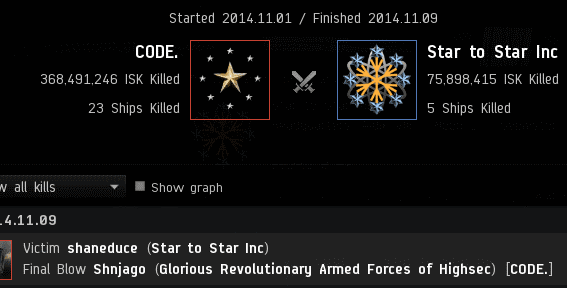 It wasn't clear what Ryuu was talking about. There was one previous war with CODE., and Star to Star Inc had been outclassed.

Ryuu quickly leased some heavy construction equipment and moved the goalpost. His corp was resisting, he said. Though futile, the decision to resist put Star to Star Inc in the top 1% of the top 1% of highsec carebear corps.

Another member of Star to Star Inc came to Anti-Ganking to assist Ryuu: shaneduce. In Ryuu's bio, we saw the soft poetry of a man writing in pale blue text and asking if he could "find himself". shaneduce was a more traditional carebear: 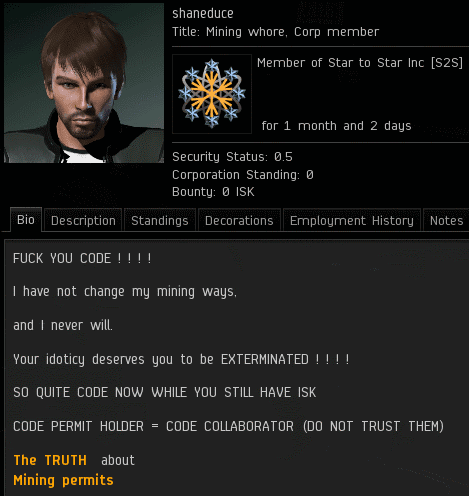 Like many disgruntled miners these days, shaneduce defined himself by his opposition to the Code.

As he continued to request support, Ryuu lamented that among the many entities who offered to join the war, most wanted money, or were suspected of being New Order Agents. Anti-Ganker Chip Mint offered some tactical advice, recommending the miners not swear in local or send profane EVEmails. It's good advice--and required under the Code.

Ryuu and shaneduce were defensive. They insisted they were professional at all times.


Agent Tom > Chip Mint stop trolling
Roysefus > or else lol
Ryuu Rockefeller > i just came here to join the real anti-code movement..and ask for war joiners around Hek
Agent Tom > Roysefus added to list sorry
Roysefus > wow lol its true though. Code says play our way or else... no the anti gankers do too?
Agent Tom > no but u do not troll in here and u my god sir is a code troll

Before Ryuu and shaneduce could get any recruits, or even any additional information about fighting CODE, the channel once again descended into paranoia. The conversation ground to a halt as the Anti-Ganking crowd accused each other of being New Order spies. Was there any hope for Star to Star Inc?