Fraud in the Reimbursement, Part 4

Previously, on MinerBumping... BARANDYWINE SHAWN-NEE lost her Mackinaw to Agent Kalorned. Five years ago, she lost a Retriever to NPCs. When she contacted Reimbursement Officer Svara Eir, for some reason she demanded to be compensated for the loss of her Retriever. When Svara refused, things got heated. 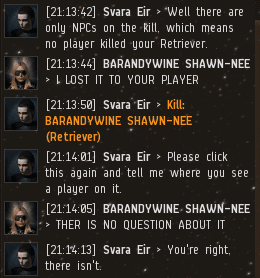 BARANDYWINE was the kind of miner who could look right at a killmail and deny what she was seeing. By contrast, Svara was an Agent of the New Order. We value truth, not delusions. 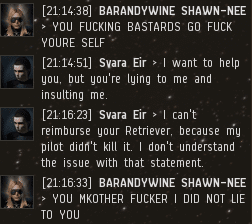 The miner continued to rage. Her anger was fueled in part by the dawning realization that she wouldn't be reimbursed for a ship "ganked" by NPCs. 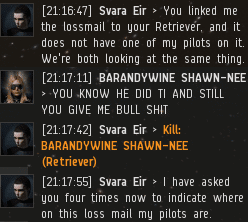 It seemed as though BARANDYWINE was prepared to continue the stalemate indefinitely. Svara didn't plan to indulge her. This matter would be resolved within the next few minutes. 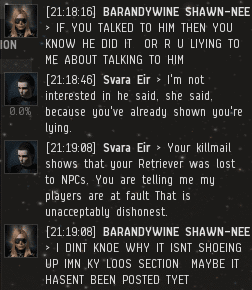 At long last, BARANDYWINE conceded that the killmail didn't show what she thought it should. But she could offer no reasonable explanation for the discrepancy. 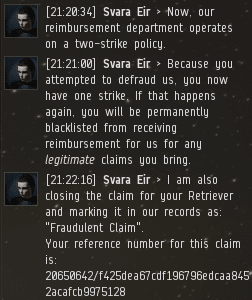 Svara had no choice but to deny BARANDYWINE's reimbursement request and close the petition. Our Agents don't do so lightly. The miner had gotten a full, fair hearing. 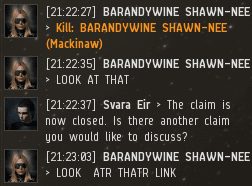 Suddenly, out of the blue, BARANDYWINE made a discovery: She'd lost a Mackinaw to Agent Kalorned, not a Retriever! And she had the killmail to prove it. 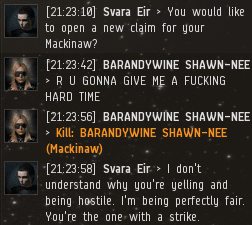 At the very moment of her deepest despair, BARANDYWINE had new hope of getting some isk. 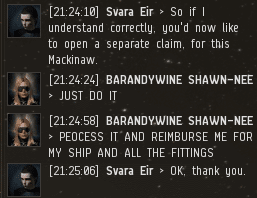 Now the miner regained her confidence. There was no denying the Mackinaw killmail. It was quite clearly destroyed by Agents of the New Order. How could Svara deny the reimbursement request? 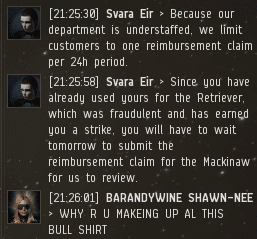 New Order bureaucracy is known for its incredible efficiency and efficacy. Of course, even our Agents don't have infinite resources--only infinite courage, integrity, etc.

More good news: BARANDYWINE could get her Mackinaw reimbursement request processed that very day, in exchange for a mere 10 million isk. This was a great offer. What miner would have a problem with handing over 10 million isk?

Alas, when faced with the prospect of paying 10 million isk, BARANDYWINE went into a rage and terminated the convo. She never spoke to our Agents again.

...At least, not for a while. Some days later, BARANDYWINE invited Kalorned to a convo, demanding a status update on her Mackinaw reimbursement request. Things got rolling again, especially after BARANDYWINE was granted priority treatment--in exchange for a full API.

As part of the investigation of her file, BARANDYWINE's API was put to work. Her old EVEmails were reviewed. Our Agents discovered that BARANDYWINE had a history of picking fights with her fellow miners.

Over time, BARANDYWINE paid 1.1 billion isk in various service fees. The status of her Mackinaw reimbursement request is inconclusive at this time. Nevertheless, our Agents are working night and day to ensure justice is done.
Posted by MinerBumping at 16:29