Previously, on MinerBumping... The Ruse Kruise devised by Agents Jason Kusion and Globby succeeded beyond anyone's wildest dreams. The whole of New Eden was caught up in the whirlwind created by their story about CODE. being robbed of 500 billion isk. 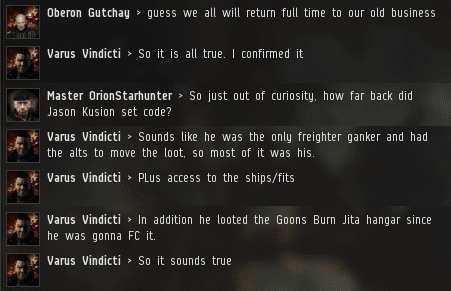 For the Anti-Gankers, the news sounded too good to be true. In their desperation to taste victory for the first time, the Anti-Gankers did everything they could to convince themselves the heist was real. 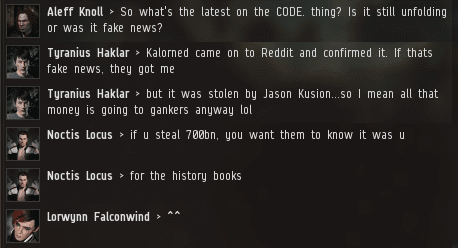 For some reason, the size of the fake heist kept changing, despite everything being based on Globby's original report, which claimed 500 billion isk had been stolen. 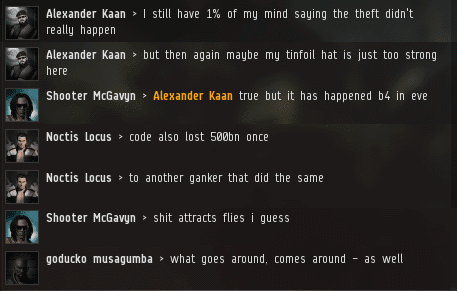 To confirm the authenticity of the heist, Noctis Locus pointed to a previous heist as precedent. Fittingly, he cited another 500 billion isk loss that never occurred. Apparently Kusion's fake heist story was reproducing. 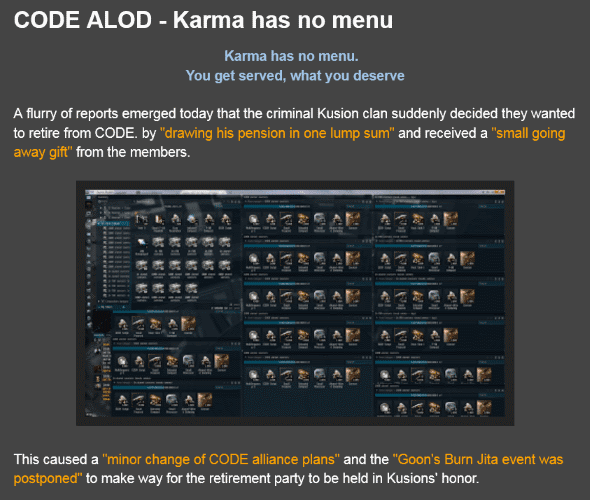 Unsurprisingly, the failing Highsec Militia blog immediately reported the story as a victory for Anti-Ganking. But this was to be expected from a fake news site. What about the "real" EVE news sites? 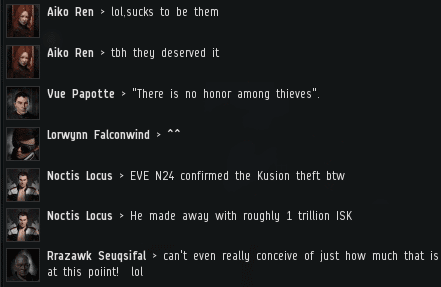 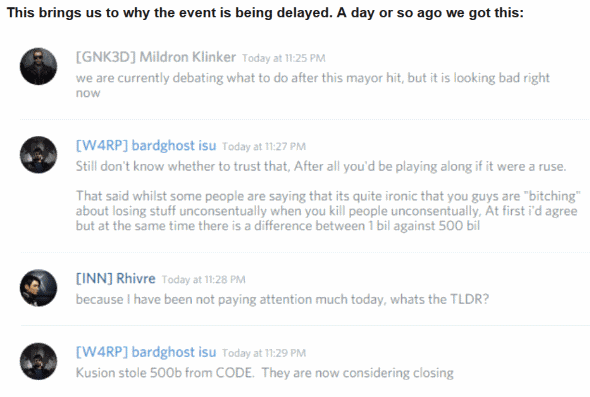 Despite its initial skepticism, EVE News 24 ultimately accepted the heist story as authentic. They were nudged in this direction by Agent Mildron Klinker, who had been in on the prank from the beginning. What sealed the deal was the rumor that Jason Kusion had also robbed GoonSwarm and ruined its plans for Burn Jita. EN24 couldn't resist believing both CODE. and Goons had suffered a loss.

Crossing Zebras, too, was taken in by the hoax, reporting it as their top story for the week (since CODE. is the most relevant alliance). The amount of the heist was stubbornly difficult to pin down. Crossing Zebras judged it to be roughly 600 billion isk.

Buoyed by the support of "legitimate" EVE news sites, the rumors kept on spreading like wildfire. However, the size of the heist continued to fluctuate.

The Anti-Gankers were now faced with a post-CODE. world. The moralizing began.

The carebears eventually decided that it was inevitable such a thing would take place. After all, shooting spaceships in a spaceship-shooting game makes you a psychopath. Of course a 500 billion isk heist would occur an in organization filled with such people.

Over the following days, the fake heist was still at the forefront of the EVE conversation. With 91% upvotes, yet another thread rocketed to the top of the EVE subreddit. The post was later deleted when its author finally learned it was all a Ruse Kruise.

But surely there were some people who were already skeptical of the fake story at the time, right?

Indeed, there were some doubters. Redditor killmoregore, who commented on the "Someone buy CODE and make it a mining corp pls" thread, was downvoted into oblivion for suggesting the heist story was a troll. 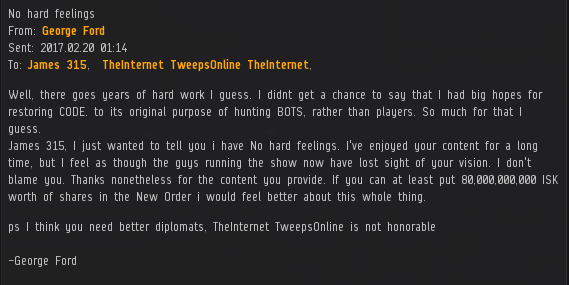 Going on a Ruse Kruise can be expensive. In response to the rumors that I was selling CODE., George Ford put in a bid of 80 billion isk and sent the money to Agent TheInternet TweepsOnline TheInternet. The deal fell through. It was no one's fault; these things just happen sometimes. Unfortunately, the structure of the deal was such that the entire purchase price was in the form of a non-refundable deposit.

Intoxicated by their counterfeit victory, the Anti-Gankers pondered how I would "spin" the story on MinerBumping. You know, I've said before that I have a really easy job--all I have to do is tell the truth. The CODE always wins. Always. And the truth about all the "CODE. is dying" stories you hear over the years is this: The Code is forever. When the servers go dark and CCP shutters its doors, the only thing that will remain of EVE Online will be the Code.
Posted by MinerBumping at 16:40