The only thing more intimidating than a space lawyer is a space solicitor. Welcome to yet another edition of the Highsec Miner Grab Bag!

If Inegeld Grayman is from the UK, then maybe there's something to this after all...

No, he's from Russia. For some reason I didn't expect that.

Winning hearts and minds is no easy task, but our Agents are up to the challenge.

It wouldn't be a Grab Bag without a miner wishing RL death on one of our Agents. With that safely out of the way, we can let down our guard a bit.

Ah, I was testing you, dear reader. Never let your guard down. 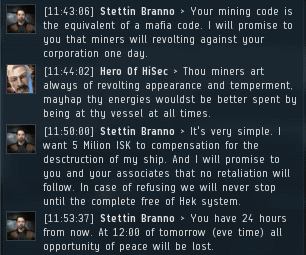 Stettin Branno would gladly wait 24 hours for a response to his 5 million isk reimbursement request, rather than spending that time earning the 5 million himself. Why do I get the feeling highsec mining isn't very lucrative?

Sandini Falcon's boss probably wouldn't be happy to know that one of his employees was playing EVE while working on a project for the company. I know how the boss feels: I certainly wasn't happy to learn Sandini was working on the project while he was supposed to be watching local.

Sandini's anger only grew when, predictably, our Agents did get him again barely an hour later. I wonder how that project's coming along.

If you're an aspiring salvager, just follow the tears.

Diplomatic work is never easy. Agent TheInternet TweepsOnline TheInternet tried to cut a fair deal with vlad powers, only to find himself being compared to a Nazi.

vlad soon found himself on the defensive, as his rhetoric got him Red Penned.

As the Saviour of Highsec, I find myself getting a lot of out-of-context apology EVEmails.

I think I know why so many carebears seek forgiveness from me. I mean, where else are they going to find forgiveness in EVE--Jita? 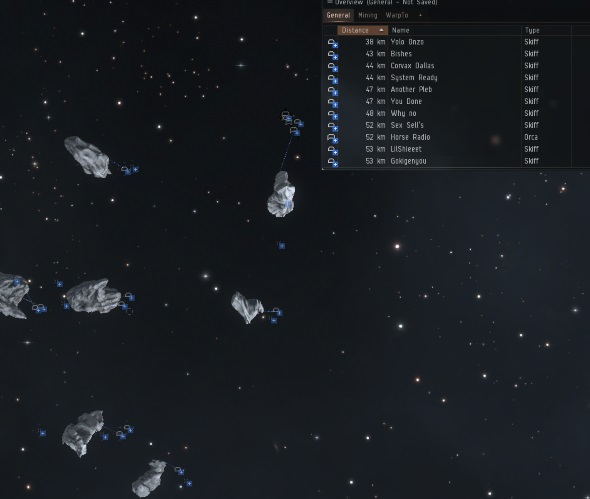 A tranquil night in Elonaya: Agent Bing Bangboom looked upon his work with satisfaction when he realized that the entire ice anomaly was populated exclusively by Code-compliant, permit-owning miners. This is a vision of the future of highsec.
Posted by MinerBumping at 01:47