People often ask, "Is a New Order mining permit an excellent investment, enabling one to mine safely in highsec for an outrageously affordable ten million isk?" The answer is yeah, pretty much. It's exceptionally rare for a permit-owning miner to be ganked. 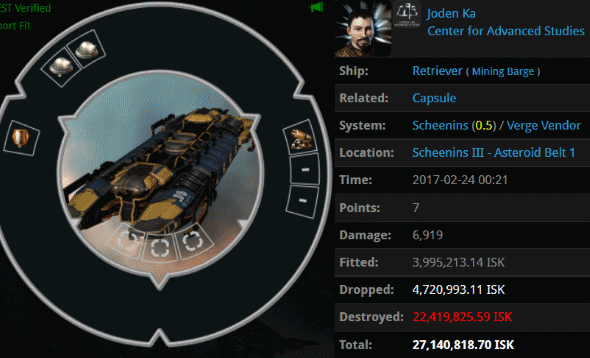 But in extreme cases, ganking permit owners can be necessary. After all, though a New Order mining permit an excellent investment, enabling one to mine safely in highsec for an outrageously affordable ten million isk, it's not a license to disobey the Code. Joden Ka went AFK while mining in a fail-fit Retriever. Agent Zopiclone saw no alternative but to gank the Retriever. The destruction of Joden's implants was also deemed necessary.


Zopiclone > Hello Miner. o/
Zopiclone > What is your excuse for not following the CODE and mining AFK?
Joden Ka > you do realize i have a permit right
Zopiclone > You mining Permit was revoked the minute you started mining AFK
Joden Ka > i was talking to my family

Joden was disappointed that his permit hadn't kept him safe, but it didn't take long for him to confess to violating the Code.


Zopiclone > You know what to do when this situation arises. You dock up
Joden Ka > i stepped away for 3 min
Zopiclone > Talking to your family while mining is prohibited. You have to have dock up whenever away from the keyboard
Joden Ka > thats not cool and you know it

The miner admitted that he'd been mining AFK for (at least) three minutes. But he tried to put Zopiclone on the defensive anyway.

At this point, Joden must've regretted confiding in Zopiclone about the unauthorized three-minute conversation with his family. But it was too late.


Zopiclone > You need to repurchase a permit if you want to stay compliant with the law. http://www.minerbumping.com/p/the-code.html Please re-read the CODE as you are clearly in violation
Joden Ka > i'm not buying another one
Joden Ka > my ship was gone and i died while i was sitting here
Joden Ka > your ridiculous
Zopiclone > You are changing your story
Joden Ka > bs

Joden tried sticking to his new story, that he hadn't been AFK. Zopiclone wasn't buying it. Why couldn't the miner just be honest with her?

Even under the best of circumstances, major life events like selling one's home or having a child can cause a lot of stress and disruption to one's usual routines. It's best to get an Agent of the New Order involved in these situations early, letting the Agent know about them in advance and getting their advice. (Protip for all the men out there: If you're planning to ask a woman to marry you, it's a classy move to ask an Agent's permission. It's not sexist or patriarchal; it's just good manners.)


Zopiclone > You've admitted that you were AFK for 3 minutes "talking to family" ,,, now you are saying you were by your keyboard... which one is it?
Joden Ka > i was away talking to my family and was back at my keyboard when you killed me
Joden Ka > so you killed me for no reason
Zopiclone > So which part of the law of highsec did you break? since you WERE a permit holder.
Joden Ka > none since i wasnt really gone that long
Joden Ka > thank you for costing me my implants

Joden couldn't help but incriminate himself further. He once again admitted to going AFK, but complained that it was unfair because his ship began taking damage just as he was sitting back down. Needless to say, Joden wasn't an expert in the Code.


Zopiclone > You clearly were not following the law of HighSec.
Zopiclone > Every Permit holder knows
Zopiclone > I even said Permits please in Local.
Joden Ka > oh excuse me for just coming back to the game after being gone for over a year


Joden Ka > im allowed to deal with real life when its needed and yes i take issue with this damn code of yours high sec is free space
Zopiclone > I dont even mind if you read a book! As long as one eye is ALWAYS ON THE MONITOR. Now that is being reasonable
Joden Ka > not really
Joden Ka > if im called by my famiy to deal with an issue i should be allowed to do so

The carebear's shifting story got him into more trouble. Even by his own logic, he couldn't use his family issue as an excuse, since he was supposedly at his keyboard when the gank occurred.

The miner's true nature was revealed. He only cared about himself and his isk, and possibly his family. He didn't care about the Code at all. Interesting priorities there.


Zopiclone > Miner calm down please.
Joden Ka > um no\
Joden Ka > it's bullshit
Zopiclone > You were breaking the law and you know it. Now you are trying to turn the tables.
Joden Ka > i was mining.......i stepped away to talk and came back to you killing my ship
Joden Ka > that is bullshit
Joden Ka > and im in the wrong here?

As Joden raged, his story about the timing of the gank grew fuzzier. Still, Agent Zopiclone took Joden's complaints very seriously. She knew her reputation for fairness was very much at stake.


Zopiclone > Yes so you were not by your keyboard. We established this breach of your duty to the law.
Joden Ka > no
Joden Ka > go jump in a black hole
Zopiclone > Miner I have invited you to a channel to plea your case.

It was time to bring this matter before an objective, impartial audience. Zopiclone would put the decision in their hands.

To be continued...
Posted by MinerBumping at 18:44