Previously, on MinerBumping... Agents Jason Kusion and Globby pranked the EVE populace with a tall tale about a 500 billion isk heist of CODE. assets. Despite its outrageous details, Redditors and Anti-Gankers alike totally bought the story. Soon Agent loyalanon and others began adding even more fanciful material to the whopper, only to have their own posts upvoted to the top of the EVE subreddit, too.

The Anti-Gankers gleefully shared the false story, accepting it without hesitation.

Though CODE. had surely been maimed by the loss of its 500 billion isk stash, it was unclear how much longer the New Order would be able to survive.

Before long, the Kusion Ruse Kruise was all the carebears of New Eden could think or talk about. 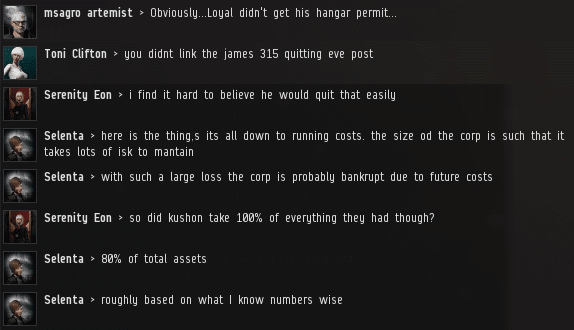 A new cottage industry sprouted up in the Anti-Ganking channel. Self-proclaimed experts offered their analysis of the situation. Though CODE. has never stored anything like 500 billion isk worth of assets at any given time, Selenta confidently projected that the 500 billion represented 80% of CODE.'s wealth.

In celebration of the historic event, more Redditors got in on the action. One posted a thread entitled How do we sponsor this killmail?, showing an imaginary zKillboard record of the destruction of CODE. due to the heist. 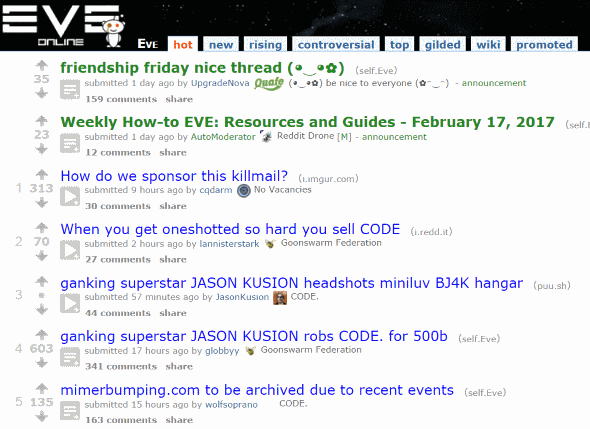 Reddit was seized by "CODE. is dying!" fever. Soon the entire subreddit was dominated by posts about the fictional heist, all of which were upvoted to the very top. 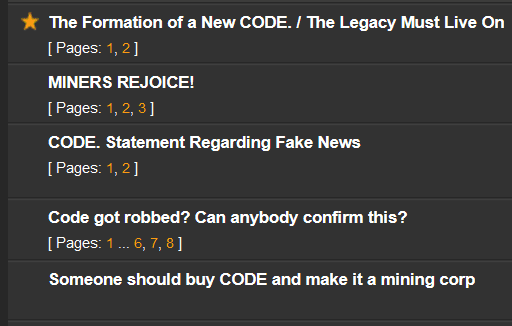 The official EVE forums were no different. The normally dormant EVE-O lit up with activity. Players were fascinated: At last, something was actually happening in the world of EVE--and it involved the game's most relevant alliance, too!

Meanwhile, the Anti-Ganking's most jaded, skeptical member weighed in. The cynical Jennifer en Marland, one of the channel's moderators, announced that she was convinced the heist actually occurred. The Reddit post had the ring of truth to it.

By contrast, loyalanon's post--claiming to be my alt and announcing the end of MinerBumping--was found to be less credible. At least, it wasn't 100% certain like the news of the heist.

Nevertheless, rumors continued to swirl. Dom Arkaral was purportedly my alt, and he had plans to sell control of the CODE. alliance to the highest bidder. Even the amount of the heist was subject to change. 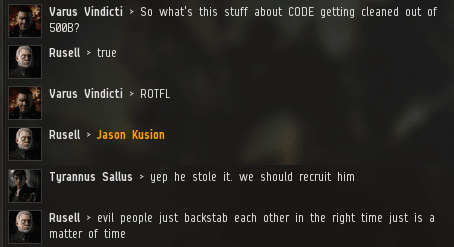 The news, of course, inspired philosophical musings from the Anti-Gankers, who now pondered the lessons to be learned from it.

The Anti-Gankers rejoiced at more good news: Jason Kusion had stolen assets from the Goons as well, forcing them to postpone Burn Jita indefinitely. Was a new era of peaceful carebearing about to begin, or would the industrialists of highsec find their dreams shattered?

To be continued...
Posted by MinerBumping at 19:07