Previously, on MinerBumping... EDISON ENGLISH woke up to find his mining ship being bumped out of the ice anomaly by Agents of the New Order. He commanded them to halt, claiming that he was a friend of the Saviour of Highsec.

EDISON spun a woeful tale of a dying CODE. alliance. Agent Lillie Naari didn't believe EDISON's story, but she wanted to conduct a thorough investigation of the matter.

A protip for all you carebears out there: Our Agents always know more than you. Always.

So far, EDISON was sticking to his story. But he had yet to produce any evidence.

EDISON stalled for time. Our Agents kept on him. The miner was starting to grow nervous. 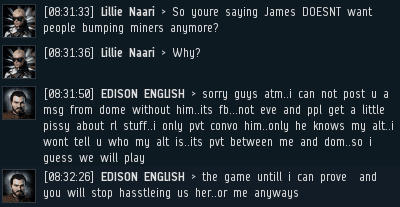 EDISON's story imploded. The frazzled carebear was at a loss to prove his connection to the Supreme Protector. 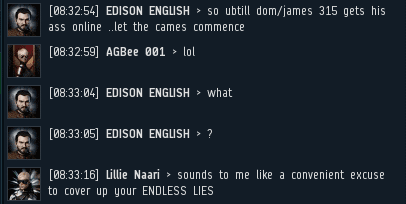 Our Agents were frank with the miner. Simply put, they didn't believe a word he was saying. 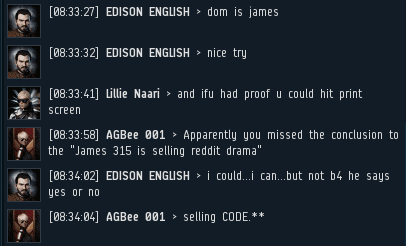 Agent AGBee 001 dropped a hint that she knew more about EDISON's own story than EDISON did--but the miner failed to pick up on it. 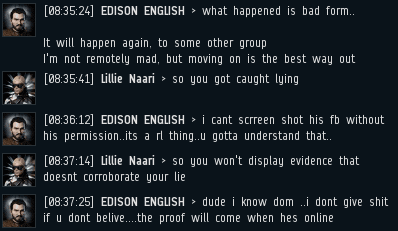 Agent Lillie relentlessly interrogated the miner. EDISON still wouldn't admit defeat. The pressure was clearly getting to him, though.

Stray hashtags came flying out of EDISON's keyboard. He was on the verge of panic.

The miner tried another stalling tactic. Lillie didn't mind. When the miner returned from his bathroom break, she'd be ready to continue the interrogation.

Agent AGBee 001 cut to the chase: EDISON's mining permit was revoked. The miner was aghast--ten million isk right out the window.


Lillie Naari > So EDISON, at this point, i guess the easier thing is to ask what you HAVENT been lying about.
EDISON ENGLISH > well he dont add or at least says he dont add eve t his rl fb page..thats why no eviance only pvt chats ect..i cant proove much untill hre responds to my msg on fb
EDISON ENGLISH > rthats the truth ruth
AGBee 001 > You strike me as a pathalogical liar, which is exactly what James says we should expect from a non-compliant miner.

The sputtering miner put his head in his hands. Why wouldn't anyone believe him?

Things went from bad to worse. These Agents meant business. Now EDISON's only hope was for the Saviour of Highsec to miraculously appear.

To be continued...
Posted by MinerBumping at 01:05