Wrapped Around Our Fingers

I've often observed that the Anti-Gankers live in a sort of anti-reality; they see the world in reverse. Thus, if you want to get a clear picture of EVE, simply join the Anti-Ganking channel and invert everything the carebears are saying.

Despite the fact that CONCORD and faction police restrict a ganker's freedom of movement to the barest minimum, those restrictions aren't enough for the carebears. That's because they want ganking completely removed from the game. CCP hasn't gone quite that far, leaving the carebears with the impression that CCP is under our control.

According to the rebels' conventional wisdom, CCP allows pro-Code players to say whatever they want on the forums. By comparison, the moderators are much more strict with anti-Code players, who get banned for the slightest infraction. 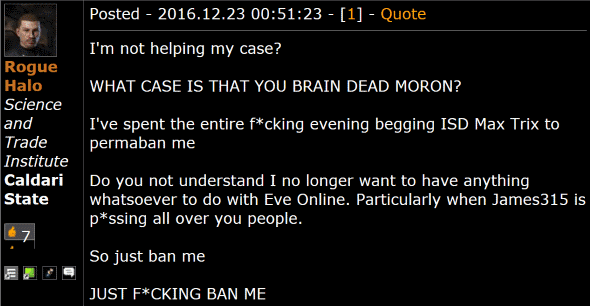 Like I said, the Anti-Gankers have a distorted view of the world. 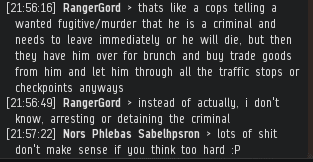 Consequently, the carebears are always confused. The harder they think, the more confused they become. And they wonder why they never win. 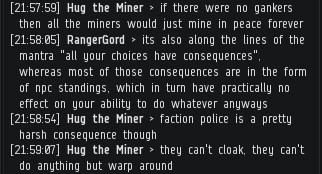 On rare occasions, someone in the Anti-Ganking channel will challenge the consensus view. They must be spies and trolls from the New Order. 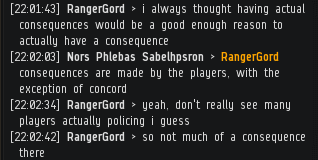 RangerGord couldn't get over the fact that having low security status doesn't make a ship insta-pop in highsec. Why, the gankers get to enjoy several seconds on grid before the faction police will appear and make the ship go pop! In theory, Anti-Gankers could fill in the gaps and help police highsec, but RangerGord conceded their uselessness. 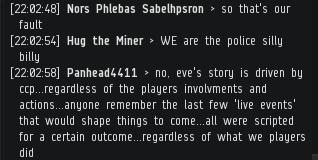 Rather than blaming themselves for their failures, the rebels blame CCP and its pro-ganker bias.

The tears about CCP were briefly interrupted for official Anti-Ganking business--which soon devolved into tears related to said business.

Agent Aaaarrgg is a frequent topic of conversation in the Anti-Ganking channel. Nevertheless, carebears often say "aaaarrgg" even when not referring to our illustrious Agent.

Ah, the irony: FuzzySmurf questioned how Aaaarrgg could have any fun when his movements were so restricted by faction police and CONCORD.

In truth, the Anti-Gankers are lucky to feel so confused and upset, and to constantly fail. It's the universe's way of telling them that they're doing everything wrong--and that they need the Code.
Posted by MinerBumping at 17:12