The Slow and the Furious, Part 3

Previously, on MinerBumping... Neocount's vendetta against the New Order was fueled by a 6 billion isk Orca loss. Unable to strike back against the Order in any meaningful way, he ranted endlessly against Agent Lawrence Lawton in Jita local. Neocount's plan was to ruin CODE.'s reputation, but the Jita locals soon turned against Neocount instead.

Neocount's fury knew no limits. As is usually the case, the miner eventually turned his insults against our Agent's family.

By now, news of Neocount's temper tantrum had spread beyond Jita. Interested persons flocked to Jita from neighboring systems to witness the spectacle.

Rather than making people hate CODE., Neocount only succeeded in demonstrating why our alliance is so vital to highsec.


TheInternet TweepsOnline TheInternet > Kill: Neocount's Orca is that what this is all about?
Jezzer Shras > I think that may be it.
Lawrence Lawton > Yep he's been crying for over an hour.
Neocount > this is all abt pieces of shit in general, the orca was just a drop in the bucket

It was no exaggeration: Neocount's ranting and raving had gone on for a solid hour. And there was no end in sight.


Neocount > it's time FOR SOMEONE TO STAND UP TO CODE.
Lawrence Lawton > Neocount We killed you specifically because of your bio.
Argyss Oqemi > this whole time i never check his bio what is it
Neocount > my bio has changed since then Lawrence Lawton , you are now proven a LIAR.
BJBee315 > Furry's are not seemingly appreciated in Eve, may be why his orca went boom 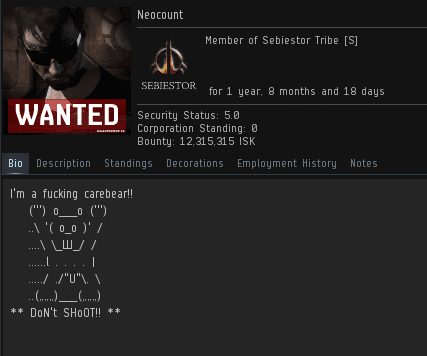 By Neocount's own admission, he was a carebear. And earlier versions of his bio reportedly contained pro-furry propaganda. This did little to endear him to the Jita crowd.

The former Orca pilot found himself alone. Even Argyss no longer backed him up. The more Neocount insulted Agent Lawrence and the Saviour of Highsec, the more people disliked Neocount.


Lawrence Lawton > Innocent newbies don't carry 5 billion worth of cargo. A 2008 player should have known better. Kill: Neocount's Orca
Nanu Muse > Neocount's ranting must be heaven for you.
Neocount > Lawrence and a decent human being wouldn't be such a coward and a piece of shit that he attacks a fucking orca after bumping, again tho, no abt just that, it's abt all of them i saw. u pedophiles and u killed so much over the weekend of burn jita that
Neocount > i wanted to remind you all you are worth nothing more than pedophiles in eve

The miner tried to appeal to his fellow hauler pilots. No one wanted to join his crusade, though. He was singularly unpersuasive.


Lawrence Lawton > Neocount was aware of The Code and he chose to ignore it. Not only did he ignore it, he flouted it. Yes, All Freighters Need Mining Permits
Neocount > you are the pedophiles of eve and you will be remembered as nothing more than that
Neocount > NO one in high sec or CCP will think of you as anything more than cowards that attack fucking freighters and miners, like fucking pedophiles preying on the weak

Nearly an hour and a half into Neocount's tirade, the word "pedophile" lost all meaning.


DIRTNAPZ > omg he still crying
Neocount > DIRTNAPZ oh hi, i logged off then on, b/c i'm tired and just winding down for the night. i personally don't care, but i'm provoking code as much as posssible,
DIRTNAPZ > *crying as much as possible... fixed that for you

Neocount still looked in vain to his fellow rebels for support. He was alienating everyone. Could peer pressure steer Neocount back to reality?


Lawrence Lawton > You are a drama queen Neocount. When you undocked you consented to PvP. Have you read the New Player FAQ?
Neocount > does that make it ok? Lawrence Lawton? so because you CAN do somehting, it's ok? fighting a defenseless freighter or miner, that gives you big man gubbles? no honor needed?
Jezzer Shras > Neocount this is EVE...htfu
Lawrence Lawton > Yes, that makes it OK, and encouraged.
Matthias Ancaladron > dude neocount, code is stupid and all but its your own fault.

The miner was stunned to see Jita rally against him. Everyone was united in the belief that Neocount was to blame for his Orca loss.

Desperate, Neocount urged the locals to consider the possibility that EVE itself would die if CODE. continued to run amok.


DIRTNAPZ > plz dont compare this to wow, you are insulting
Neocount > they aren't honorable, they are pieces of shit, that just want your shit. that's it
Neocount > \your a freighter, or miner they want your shit, b/c they are cheap and can't pvp
Matthias Ancaladron > if youre that mad neocount, dont play
Matthias Ancaladron > send me your assets and ill hold them for you untill you cool off

The miner's argument went over like a lead balloon. Surely Neocount had no choice but to surrender and obey the Code. If he had 10 million isk in his wallet, there was still a chance for him. Would he take it--or would he descend even deeper into oblivion?

To be continued...
Posted by MinerBumping at 15:15