Over One Trillion One Hundred Twenty-One Billion in Shares Sold

New Order stock is always available. Authorizing an infinite number of shares for purchase was one of the best business decisions we've ever made. We have opened the financial future of highsec to the masses. No one can accuse us of being snobs, that's for sure.

Density Xavier referenced her recent purchase of 155 shares when asking her question about how to buy a permit. I already gave Density the instructions on how to buy a permit, but let's talk about the shares: Her purchase sent us exactly to the 1 trillion 116 billion isk mark (good timing and math!) and earned her a Supreme Protector's Tip of the Hat™.

Burn Jita was the gift that kept on giving. Super Perforator celebrated the event by purchasing 2,555 more shares of New Order stock, sending us over the 1 trillion 117 and 1 trillion 118 billion isk marks. By adding to her already sizable holdings, she earned a Double Supreme Protector's Tip of the Hat™.

Meanwhile, Apo123 increased his own holdings, purchasing 315 more shares. This was enough to get us past the 1 trillion 119 billion isk mark and earn him a Supreme Protector's Tip of the Hat™. 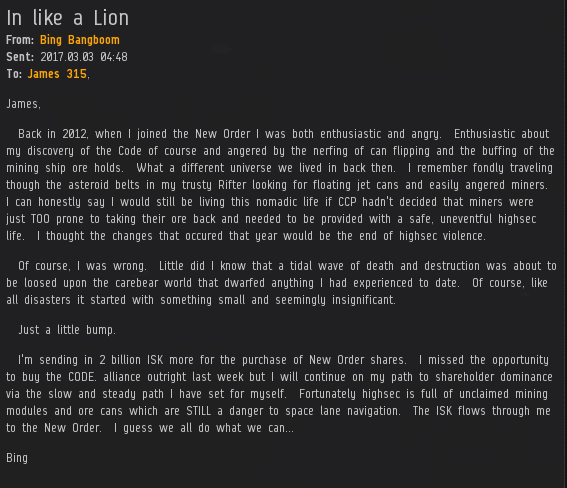 Celebrated philosopher and Agent Bing Bangboom was in a reflective mood this week--as he often is when purchasing New Order stock. Bing bought 2,000 more shares, and this sent us over the 1 trillion 120 billion and 1 trillion 121 billion isk marks. He earned a Double Supreme Protector's Tip of the Hat™.

Super Perforator and Bing Bangboom are both getting close to breaking into the top five shareholder positions. I told you to keep an eye on those two.

Buying a lot of New Order stock--particularly at the highest levels--is pretty darned elite. It's basically EVE's endgame content. But what, you ask, is there to say about the low-level EVE player? Such as the lowly freighter pilot, for example? 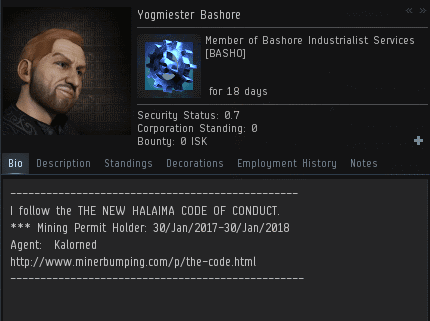 Step one: Get a permit. Buying a mining permit makes life in highsec much easier. It's like... It's like going to Chill Penguin's stage first in Mega Man X so you can pick up the speed boots. Trust me, get yourself a mining permit as soon as you can. 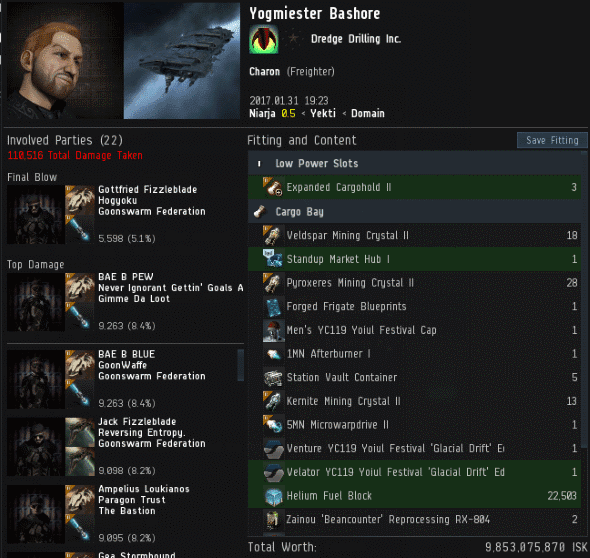 Lesson number two: A mining permit is a requirement of the Code, not a license to violate the Code. The day after getting a permit, Yogmiester Bashore lost his freighter. He was triple-anti-tanked at the time.

Yogmiester had a well-documented history of flouting the tanking requirement of the Code. 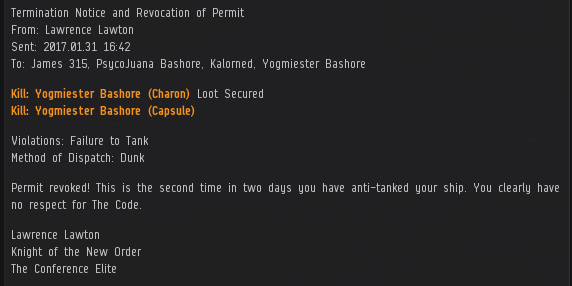 Agent Lawrence Lawton therefore had no choice but to revoke Yogmiester's permit. This decision was immediately reinforced by Yogmiester's reaction:

The freighter pilot was more concerned with someone telling him to do a hauling job. Carebears, if you're that worried about what someone is telling you to do, and that person's name isn't James 315, then you're doing EVE wrong.
Posted by MinerBumping at 18:35