Previously, on MinerBumping... When highsec miner Beef Punchmeat applied to join KarmaFleet, recruitment officer Vulkyn peppered him with questions about the Code. Beef declared his intention to disobey the Code by not buying a mining permit. Beef's other remarks during the interview reinforced Vulkyn's suspicions that Beef was a bot-aspirant. Beef's application to join KarmaFleet was rejected.


Beef Punchmeat > Really Vulkyn?
Vulkyn > Eh?
Beef Punchmeat > You denied my application. I have a feeling its because I dont agree with how the CODE is set up
Vulkyn > We don't comment on why we won't invite people to join us. I know that sucks.... but if we told people why, people would game the system.

Although KarmaFleet policy doesn't allow recruitment officers to give a definitive explanation for why an application gets rejected, Beef was convinced that it was all about his disobedience to the Code.

So much for Beef's fresh start in nullsec. The fact of the matter is, if you fail to conduct yourself in an appropriate manner in New Order territory, your history is going to follow you no matter where you go.


Beef Punchmeat > By Vulkyn, whom I disagree with about CODE. Seems like Karmafleet is not as welcoming as it says
Vulkyn > Nearly 7000 members of KF would disagre....
Hydrium Eternite > We wish you the best of luck and hope that you will find a home that you enjoy.
Beef Punchmeat > I'm sure I will.

Beef seethed. He'd always assumed that the New Order's ideas about proper EVE gameplay were irrelevant outside of highsec. In reality, many nullsec players recognize a simple truth: If you act like a Goofus in highsec, you're probably going to act like a Goofus in nullsec.


Robby Kasparic > I am now currious to know his thoughts on code
Robby Kasparic > as Im sure they are well thought out
Hydrium Eternite > I used to hate them lol I had them set at -10 until like a week ago when I looked at my contacts and noticed I had done that when I had just started.
Beef Punchmeat > Well, I dont belive anyone but CCP can dictate how I chose to play this game
Phoenix Flames > That's not technically accurate. You join a corporation/alliance, they'll have rules you have to obey if you want to stay.

It's a classic miner cliché to claim that only CCP can tell you what to do in EVE. Carebears always use that as an excuse not to buy a mining permit. It's nonsense. Needless to say, nullsec alliances exercise even tighter control over their people than our Agents do!


Beef Punchmeat > CODE enfocement 'agents' dont seem to care about some folks who have a permit. As well as the fact that they try to tell people what they should put in local chat. That smacks of despotism which I disagree with
Vegan Spyder > Phoenix couldn't have said it better about corps
Beef Punchmeat > Exactly, I will not pay them isk for what I see is a matter of opinion
Robby Kasparic > And you dont have to
Robby Kasparic > But as with all interactions with others, it will have the potential for consiquences

It's interesting to note that everyone else in the KarmaFleet channel had a much more mature attitude than Beef did. He stuck out like a sore thumb. It's no wonder he was rejected.


Beef Punchmeat > Right, however Vulkyn disagrees with me, which is fine, but I noticed he just rejected my application. I belive this is because of our disagreement. I find this to be odd in a corp which claims to welcome all.
Robby Kasparic > I have known Vulkin for some time, and I do not belive for an instant that he would reject someone wihtout good reason
Vulkyn > Our public rules are: dont be an asshole.(but we do have som esecret things we reject people for... whihch we can't talk about)

Beef left the channel in a huff. But his grievances against KarmaFleet and the mighty CODE. alliance only grew. He needed another outlet to voice his discontent. He found one. 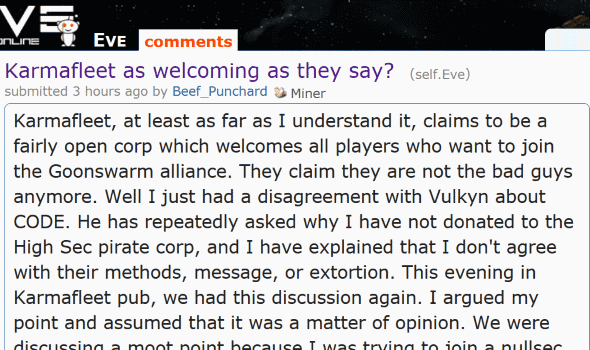 Beef went to Reddit and unloaded on both KarmaFleet and CODE., complaining that his attitude about the Code had gotten him blacklisted by a supposedly neutral, welcoming corp. 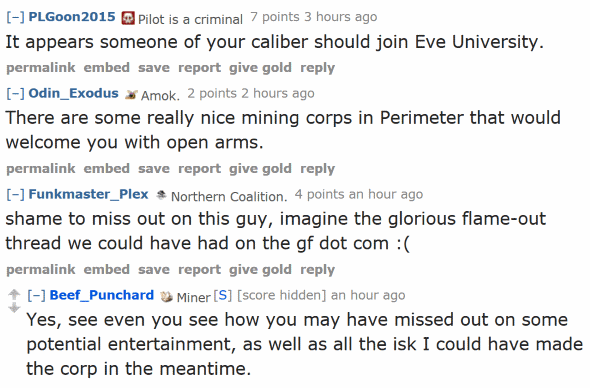 Normally, the EVE subreddit would be receptive to criticism of Goons and (especially) CODE. Yet Beef's tendency to rub people the wrong way asserted itself even here.

Beef isn't one to give up, though. He hopped back and forth through the replies and defended himself against the attacks. Although Beef was persistent, he showed a lack of willingness to learn. His attitudes about the Code remained uninformed:

Instead of learning about and embracing the Code, he dug in his heels. However, the fact remained that no matter how persistent he was, Beef was not going to be able to join KarmaFleet. 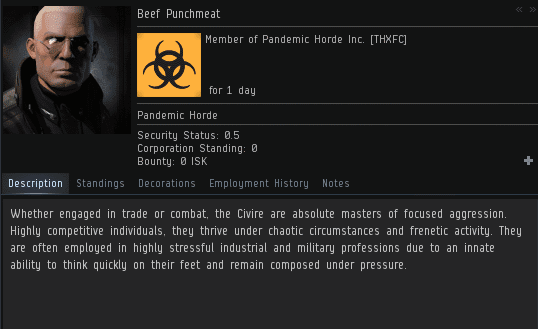 Eventually, Beef realized that his only option was to join a corp that accepts all applicants. Though Pandemic Horde Inc. wasn't his first choice, it did give him access to nullsec. Now, at last, he could escape from his anti-Code history.

Even deep within Pandemic Horde space, the consequences of harboring bot-aspirant beliefs caught up with him. While out in his ratting Raven, he was killed by a four-man gang who had no apparent ties to the New Order. Then one of the four dropped a link to Part 1 of this MinerBumping post in local. Enraged, Beef posted another Reddit thread about this latest insult. 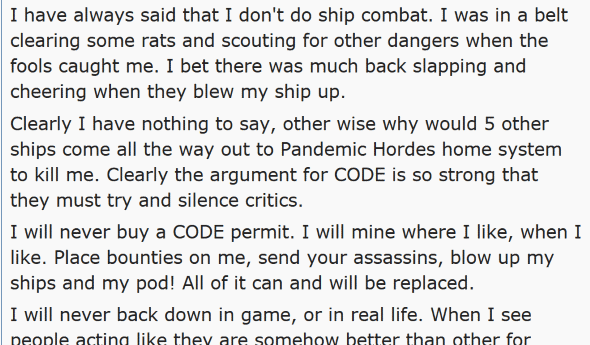 Minutes later--as this story was going to press, in fact--I was notified of Beef's new outburst on Reddit. 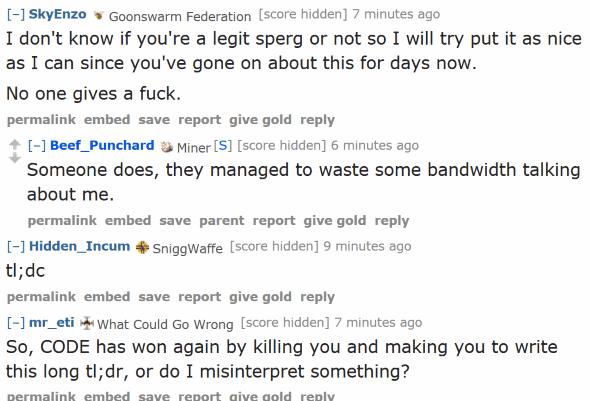 Even now, Beef is still fighting the bad fight. In the interest of fairness, here is the rest of Beef's "statement":

I will never back down in game, or in real life. When I see people acting like they are somehow better than other for some arbitrary reason, I'll say something. I will call people out when they act like they are better than anyone else.

Other people can stay quiet. Other people can insult me, they can destroy digital assets, but they can never take away my ability to speak. I don't know if I am even in the majority when it comes to CODE. I don't know that my position is even all that popular. What I do know is that I will never keep quiet when I see people try to enforce unfair, and unjust arbitrary rules because they can impose a negative status.

Anyone in real life can break into my home, kill me, and take my stuff. I could defend myself, but there is no guarantee I would win. In the event that this happens to me, I will still rail against it. I will call it what it is, crime. The only authority I believe has the power to decide what happens to my life is the United States Government. I recognize the authority of this government, and its subordinate governments of the states. I recognize this authority not because they have weapons, but because I get a personal choice in who represents me in this government.

The people who enforce CODE with violence do not have my support, nor do they have my silence! I will not accept the authority of a self imposed, self elected group over anyone outside of that group. Any miner who want's to support CODE, with the public display of a permit purchased with ISK they made, I have no issue with you. You have made a choice, and as long as it was of your own free will, I will never call you wrong. I may disagree with CODE, but I will never disagree with a choice anyone has made.

For the people hunting me, for the people who want to blow up my ship and my pod out of the sky, I say fine. I understand and accept that this may be how you have fun, how you blow off steam. Although I can't understand what would drive a person to generate fun for themselves by causing distress in others. I cannot wrap my head around why some people would want others to suffer, and revel in what is really speculative suffering as they can never really know what is going on in the head of the other player. They laugh and joke about inflicting misfortune on others and it simply makes me wonder.

What happened to the people who act like this? Did mom not give them enough snuggles? Did dad never tell them he loved them? Maybe they were bullied in school, and the only way they can keep their shattered mind intact is to visit an approximation of the suffering they receive onto others.

If this is the case, I welcome this out pouring. Pour your hate into me if that is the only way you can stop yourself from acting out in real life. If hunting me saves some other exumer from being harassed, bring it on. Camp the stationed I am docked at, wreck every ship I launch into the void. I can take it, let me be the hatesink so that others may play in peace. I welcome the storm pro CODE forces will supposedly bring upon me. I have survived much much worse than anything you can do to me.

So yes! As a reward dear reader for trudging through that massive block of text I will say it clear. I hereby affirm and declare to this site and to all of New Eden, Fuck CODE. Fuck it, and the rifter it came in on! I will stand still in Times Square and allow the entire population of Earth to kick me square in the dick before I give any CODE enforcement group one red cent!

What are we to make of all this? It's simple, really. If you're a carebear who has ambitions of ever leaving highsec, obey the Code now. It's the only way you can have a future anywhere in EVE. If you have a history of resistance, biomass your character and start over--or beg for the forgiveness that only the New Order can provide.
Posted by MinerBumping at 17:15