Bot-Aspirancy Is a Helluva Drug

Kazarax was having a rough day. He lost a Procurer while mining in a wormhole, so he retired to highsec, where he thought it was perfectly safe to mine in a yield-fit Hulk. 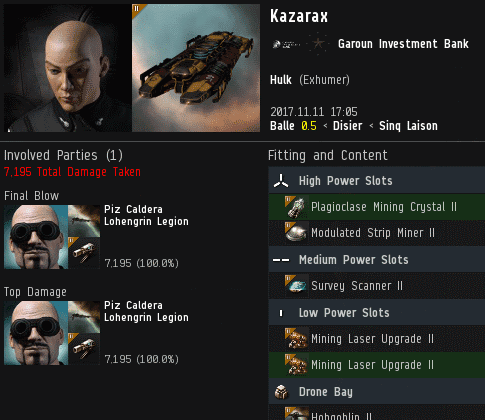 ...He thought wrong. Agent Piz Caldera spotted the miner in the Balle system and destroyed his 411 million isk Hulk.

Despite playing EVE since 2010, Kazarax knew little about the game. He couldn't imagine what would motivate someone to gank a Hulk. 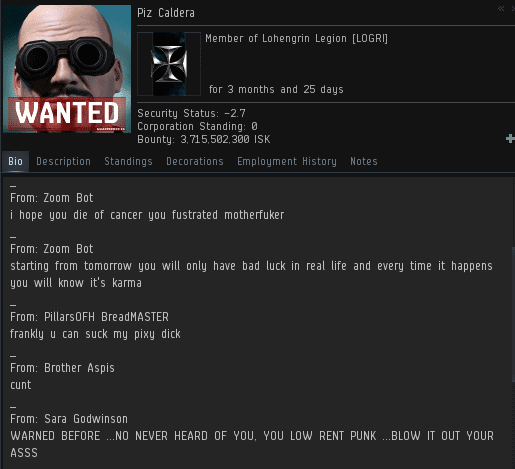 The answer, of course, is the Code. Piz Caldera has been a Code enforcement Agent for a long time. After dealing with so many miners like Kazarax, he's developed a very thick skin.

From the beginning, Kazarax's thoughts were disorganized and erratic. He simultaneously wanted Agent Piz to go away and come back.

Our hero gave Kazarax a link to the Code. Maybe that would help focus the miner's mind, such as it was.

Piz grew alarmed. This miner wasn't calming down. If anything, he was heating up.

You know how miners complain about being defenseless--"ships that can't shoot back" and all that jazz? Kazarax put that nonsense to rest. He admitted that his mining ship was armed with attack drones. In fact, Kazarax felt the odds had been in his favor. He lost anyway, though. Like so many other miners, he forgot to factor in the Code.

Let this be a lesson not to negotiate when your emotions are out of control. Kazarax bid his reimbursement request down from 300 million to 250 million, on a ship worth 411 million.

The usual methods of dealing with a crazy miner--which are normally so effective--didn't seem to work on Kazarax. He again asked Piz to go away and come back.

Deprived of his bot-aspirant isk-grinding fix, the miner ranted and raved like an addict.

By this point, Agent Piz doubted whether the miner could be reasoned with. Still, it was his duty to keep the carebear apprised of the dire consequences of his actions.

The scatterbrained miner drifted aimlessly in his bot-aspirant haze. Who can hope to guide someone like this to the safety and joy of Code-compliance?

Agent Piz could only shake his head and move on to the next miner, one more capable of being helped. Kazarax was in a fog and wasn't coming out any time soon. But Piz didn't leave without first giving the pitiable carebear a parting gift:

Kazarax was marked with a 315,315 isk bounty. One can only hope that the next Agent will have better luck with him.
Posted by MinerBumping at 16:53