Over One Trillion Five Hundred Sixty-Four Billion in Shares Sold

Ah. A tale of two Supreme Protector's Tip of the Hat™ recipients.

If ever there was an opportunity to snag an easy Supreme Protector's Tip of the Hat™, it was this week. Who would be quickest on the buzzer?

'Twas Comnena, a new shareholder who purchased 50 shares--more than plenty, under the circumstances. Comnena's purchase took us up to and through the 1,559 billion isk mark and earned her a Supreme Protector's Tip of the Hat™.

Of course, timing isn't everything. Some shareholders go for the gold, and they're not willing to wait until the moment is ripe. They shape circumstances by taking bold and decisive action. 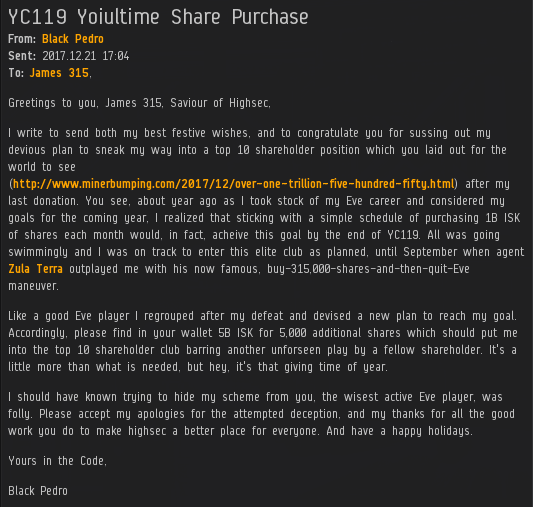 Now that's an EVEmail that crackles with energy. If anyone in the Anti-Ganking movement still wonders why they can do nothing but fail--they should ask whether there's a single Anti-Ganker who could write an EVEmail like Black Pedro's.

EVE Online, what a game.
Posted by MinerBumping at 16:39