I'm From Nullsec, Where I Live in Nullsec

The mighty CODE. alliance has a fearsome reputation, which has spread across the entire galaxy.

And few Agents are as notorious as Aaaarrgg, the "Wolf of Highsec".

Aaaarrgg has over 11,000 pod kills to his name. In theory, pods are uncatchable in highsec. However, theories rarely take into account the full wretchedness of bot-aspirant carebears.

Shadea Kavees lodged a stiffly worded complaint after her insta-warping pod managed to get ganked in highsec. She was confident that someone else was to blame for her loss.

Shadea denied the charge of being a highsec miner. The budding space lawyer decided that her non-miner status entitled her to full reimbursement of her loss. 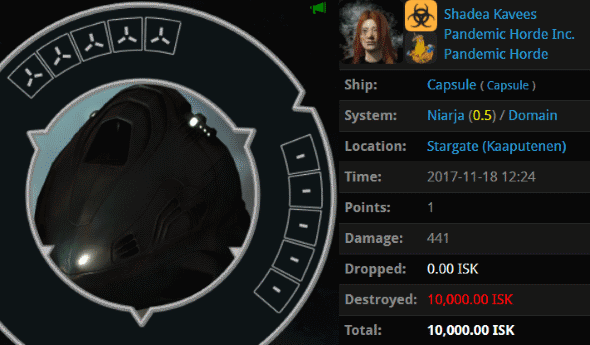 I've heard of reimbursement fraud, but this one takes the cake. What happened to space lawyer ethics?

Our Agent grew suspicious of the carebear. Shadea felt awfully comfortable autopiloting through highsec for someone who supposedly wasn't from around here.

Shadea talked about being from nullsec a little too often. In fact, she wouldn't shut up about it. It raised doubts about Shadea's authenticity. She couldn't be a true nullsec dweller. 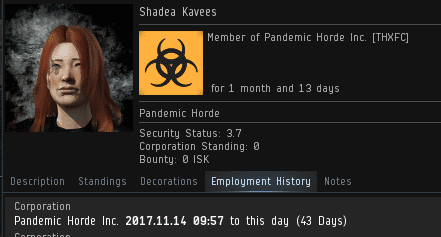 Sure enough, she was a member of Pandemic Horde. And at the time, she'd been a member for four days. You don't get any more nullsec than Shadea Kavees.

Shadea lashed out at Aaaarrgg for pointing out the obvious. She didn't know how to change her clone location, so the carebear was forced to travel all the way back from highsec every time she got killed. No wonder she was in such a bad mood.

Agent Aaaarrgg has seen a lot of foolish carebears, but Shadea was an all-time Goofus. On the plus side, Shadea confirmed that New Order territory is better patrolled than nullsec.

The Pride of Nullsec warned Aaaarrgg not to visit her neck of the woods. It was no empty threat--she might snuggle him to death.
Posted by MinerBumping at 18:10