The Code on Corpse Collecting

Agent Pod-Goo Repoman reported an unusual event that occurred in the Niarja system.

Following his protocols, Agent Pod-Goo destroyed an autopiloting rookie ship so he could pod its pilot. But Sophie Onren claimed that she was engaged in a different activity altogether.

This sparked an intriguing debate about the Code. What does the Code have to say about ganking corpse collectors? I mean, corpse collecting isn't PvE, exactly, is it? 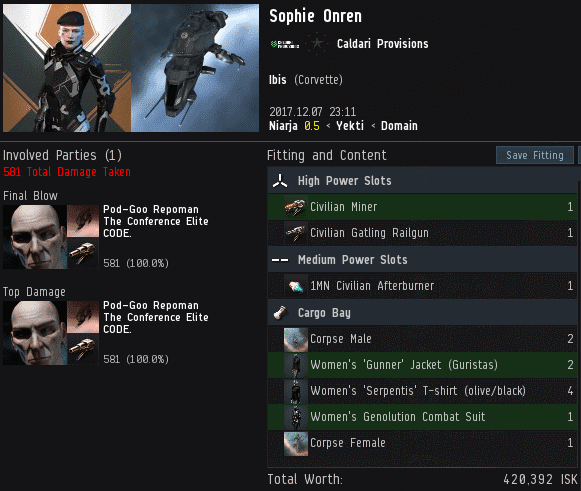 (And before you ask, yes, there's evidence to support Sophie's claim that she really was scooping corpses. So we can't dismiss this case simply by calling her a liar.)

Though the word "corpse" is not contained anywhere in the text, the Code actually has a lot to say about corpse collectors--if you give it a good, deep reading.

First off, consider what happened here. Sophie was slow-boating her rookie ship toward a gate in Niarja. As a result, while Sophie was crawling around for corpses, Agent Pod-Goo mistook her for a typical autopiloting rookie ship, the kind our hero ganks every day. If you're engaged in an activity that makes you look like a Code violator, that immediately implicates the "appearance of botting" provision of the Code. I wrote an entire post on that topic a few months ago, so we don't need to go into it again here. Long story short, if you look like you're violating the Code, that's a violation of the Code in and of itself.

There's something else I'd like to address about Sophie's case. Consider what she was doing. Sophie was piloting a cheap but highly vulnerable ship in a location where such ships are routinely ganked. Why did she do that? Why didn't she fly a tankier ship, or at least a faster one? Because she assumed she was safe. Because she was in highsec.

That, friends, is bot-aspirancy, regardless of the particular activity she was engaged in. Imagine, for example, that you had an untanked, blingy ship perched near a gate. Suppose your purpose for being there was to enjoy the scenery, not to engage in travel or PvE. The Code doesn't mention sightseeing, but clearly you're in violation of the Code, because you're taking your safety for granted in highsec.

As we all know, the Code does not permit such things. This, too, we know: That the CODE always wins. Always!
Posted by MinerBumping at 18:42