Previously, on MinerBumping... Highsec miner Fictions spiraled out of control after being bountied by Agent Yucie Van Burean. When Fictions declared war against her corp, it backfired. Later, Fictions was suicide ganked, and Agent Karak Terrel offered to sell him a permit. Fictions vowed to execute an elaborate revenge plot.

Fictions' master plan was to go to the EVE forums and place a bounty of his own. Though Fictions eventually removed the original post in the thread, the text was as follows:

in real life ive been bullied and harrased thats why in a game i dont, pvp are friendly to who need help

i pay each kill of any code member 5 mill and ask all high sec corporations to make a stand and fight these people who think they can ruin our game to declare war on them and show them unity together we can kill them with there license to mine sigh...

The mighty CODE. alliance faced an unparalleled threat: Thanks to Fictions' public bounty offer, it was open season on the CODE. And it didn't take long for someone to claim one of the bounties: 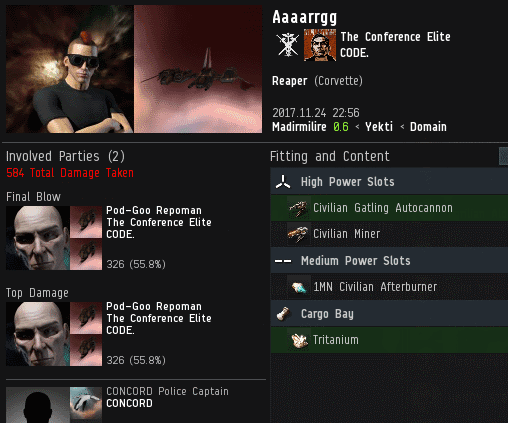 Agent Pod-Goo Repoman scored a sweet kill against Agent Aaaarrgg's rookie ship, which was being CONCORDed. The Anti-Gankers were doubtless green with envy.

Fictions carefully vetted the bounty claim. Unfortunately, he chose to discriminate against Pod-Goo based solely on the Agent's affiliation with CODE. 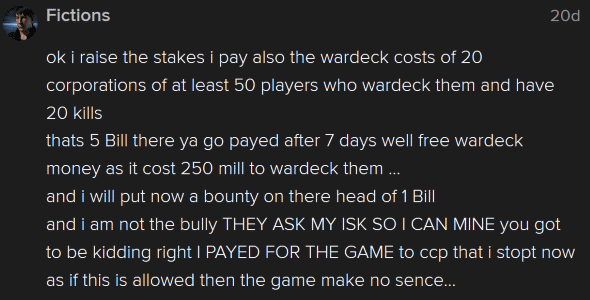 The miner was discouraged by the fact that only CODE. members were claiming the bounties. He had to make a more enticing offer.

Meanwhile, things weren't looking good for Fictions' corp. He wardecced Agent Karak's corp, only to have the courageous Agent set the war to mutual. And the much-hated The Marmite Collective took a renewed interest in the carebear.

Fictions put on a brave face. At least he was in a target-rich environment.

The miner found the EVE forums to be unexpectedly hostile. People were more interested in his history of making real-life death threats than in his offer to pay people to kill CODE. 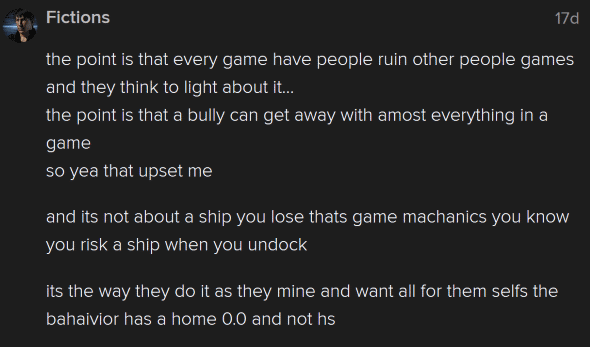 Fictions continued to defend himself against a rising tide of criticism. Where were all of the pro-carebear voices? Maybe they were still trying to post on the old forums.

The miner was disgusted by the fact that no one seemed interested in killing CODE. members, even for pay. His master plan was a big flop. Time for Plan B.

Plan B consisted of Fictions threatening to quit the game. If people thought he wasn't playing EVE anymore, maybe they'd leave him to mine and mission in peace. 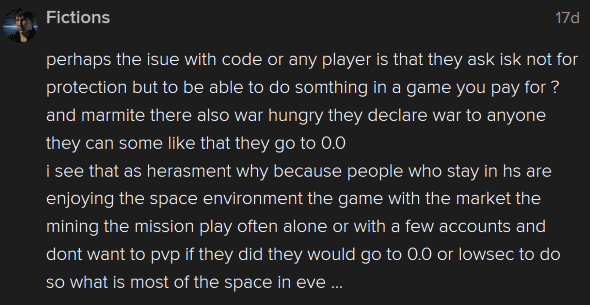 Although Fictions told everyone he was leaving, he couldn't resist the temptation to continue spreading his vile, bot-aspirant philosophy. Agent Karak, who still had a mutual war against Fictions' corp, went hunting--just in case the carebear was still active. 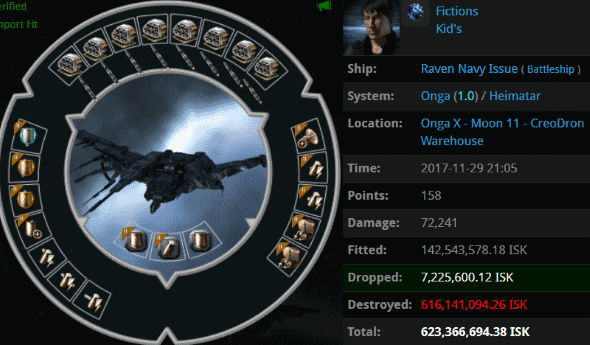 Karak discovered Fictions hiding in a 1.0 security system. The carebear's capacitor-tanked Navy Raven was no match for the Code. Fictions spent the night replaying the battle in his mind over and over, trying to figure out what went wrong.

Finally, Fictions had a revelation: The only reason he lost the battle was because Karak was being remote-repped by a cloaked ship! That was obviously against the rules, so Fictions filed a petition to report Karak for hacking. 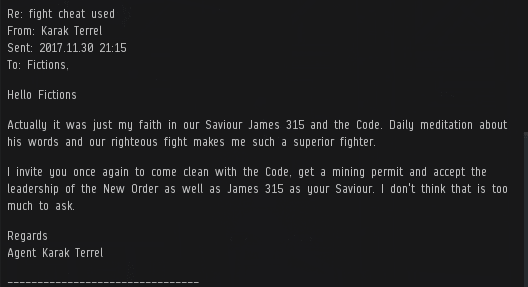 Our hero vigorously denied the accusations. Though Karak had indeed made use of an overpowered game mechanic, it was the Code, not a hack.

The next day, CCP closed Fictions' frivolous petition. Outraged by the injustice, the miner decided it was time to go. Fictions and his alts dropped corp.

Fictions announced his retirement from EVE, a game he'd played since 2006. Highsec had changed a lot since the miner had started playing. Regardless of what Fictions said, there's still a chance that he might return to the game. Our Agents remain ever vigilant.
Posted by MinerBumping at 17:09